Graham Wants Schiff to Testify if Senate has Impeachment Trial

Graham Wants Schiff to Testify if Senate has Impeachment Trial 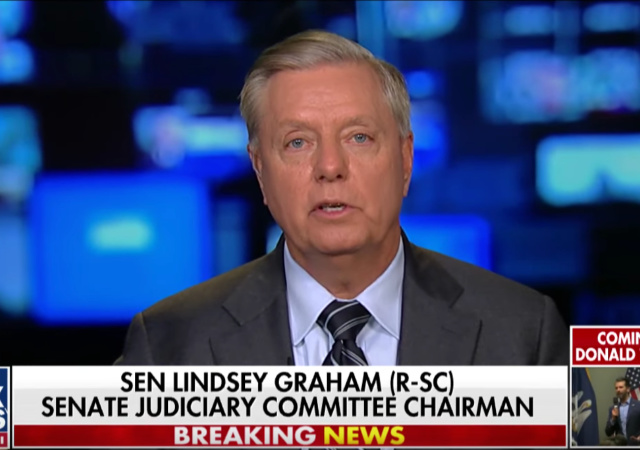 “As a matter of oversight, I’m not going to call a House member, but if you impeach the president of the United States, I want to find out if in fact Schiff and his staff met with the whistleblower,” Graham said.

“So if there’s a trial in the Senate, one of the witnesses will be Adam Schiff because if he in fact did meet with the whistleblower and coach the guy up, I think that’s relevant to the impeachment inquiry itself,” Graham continued.

At the beginning of the first public impeachment inquiry hearing on Wednesday, Rep. Jim Jordan (R-OH), who was temporarily moved to the Intelligence Committee, asked Schiff when they could vote on having the whistleblower testify since it was he who wanted to hear their testimony in the first place.

“You are the only member who knows who that individual is, and your staff is the only staff of any member of Congress who has had a chance to talk with that individual,” Jordan said. “We would like that opportunity. When might that happen in this proceeding today?”

“First, as the gentleman knows, that’s a false statement. I do not know the identity of the whistleblower and I’m determined to make sure the identity is protected,” Schiff replied. “But as I said to Mr. Conway, you’ll have an opportunity after the witnesses have testified to make a motion to subpoena any witness and compel a vote.”

Ok, bro. Go look at reports in September and October.

If Schiff testifies I wonder if the Republicans would ask him about all the leaks from the Mueller investigation.

I hope he has his copy of Quigley On Evidence on hand.

It is Schiff, after all. Expect it to be the Daffy Duck book on hunting seasons.

Ask Schiff to read line 7 on page 236 of the Taylor transcript.

Schiff: That name is redacted.

A: Not in the original version YOU released to the public.

Schiff: That name is redacted.

A: Do you expect the country to “un-see” the name Eric Ciamarella?

So combined with McConnell’s announcement that if the House impeaches, the Senate will have to hold a trial, is Graham serving notice that Schiff himself will face perjury charges (if not outright treason) should he succeed in forcing an impeachment vote? Maybe that is what the McConnell/Pelosi deal is about? A way to get rid of Schiff and the Squad in, as Biden might say, “one swell foop”?

Not sure he’d be subject to perjury, I don’t think he’s under oath.

He will be called to testify as a Senate witness and I am sure he will be under oath. He has to perjure himself to the Senate, no in statements he makes in the House as a committee chairman. How hard would it be to nail him with all of the lies he has told where he himself provided the evidence to the NYT alone?

It’s a implied threat – if the House impeaches Trump the Senate will depose you. I don’t doubt the senate will call Schiff – I only doubt they’ll grill him the way us little people want him grilled.

This is a definite threat. If the Senate has a trial, the President will be allowed to be represented, with all the trimmings of due process. The Democrats should be careful what they wish for.

After all this nonsense, I am looking forward to the trial. I don’t wish it on DJT, but I think it will purge our Legislative branch and about three Agencies.

I’m expecting the House Dems themselves will besiege Pelosi with calls to pull the plug and end this. I believe Schiff is on trial here in Pelosi’s eyes. They just don’t have a case. I think this will be over in a week or so.

Schiff as the head witch hunter, certainly. Also, Biden, Kerry has been implicated, probably Clinton, and Obama who, incredibly, voted present for 32 trimesters.

Mittens, too. Paul Pelosi as a material witness.

If he does not know the identity of the whistleblower, how is he going to protect him??

Personally, if I were a member of the Committee, I would ask all witnesses, “Have you ever spoken with Eric Camirilla?” and watch them bend themselves into pretzels trying to stop the question — after all, it is a mere question and says nothing about the alleged ID of the alleged whistleblower.

1. The Senate sets its rules, but it’s going to be hard for a Republican to vote “no” to a motion that unless the leaker testifies the case be dismissed. 2. The Senate cannot compell Schiff or his staff to testify, but if he does not agree to testify, see #1. 3. In the House, any question to a witness about “Eric Camirilla” will be ruled out of order. The explanation for the question’s not having been asked yet may be that Schiff has told the Republicans that he’ll file ethics charges if they do ask; if Schiff has threatened that, he’s bucking to be expelled if the Republicans take the House in 2020. 4. The Senate will likely subpoena Mr. C. and ask all about his meetings with Schiff or staff. It’ll embarrass the Democrats whether he says he’s not the leaker (whether that is true or a lie), says that he & Brennan rather than the President should control policy or takes the Fifth. 5. His lawyer (Zaid) can also he called. I am not sure that if he is called he can claim that the client’s identity is privileged.

Sen. Graham is making a threat, and I suspect it is directed to more than our pencil-necked liar.

I tuned in yesterday, and tuned right back out after Schiff’s third lie in about two sentences. Nevertheless, a number of people kindly supplied full video of several decisive Republican cross-examinations.

The demeanor of the witnesses was interesting: They seemed happy to confirm the answers the Republicans were seeking on cross. This all sounded very different from the Washington Post versions of both the secret testimony and the public testimony.

From my point of view, it appears that Trump’s big sin was scaring these guys during negotiations by doing exactly what I wanted him to do: Questioning expenditures, and looking for some sort of proof that tthe money would be well-spent. It is not lost on me that the money was disbursed three weeks before the deadline, that the aid was more generous than under the Obama administration, and that sale of arms was allowed. Further, it is significant to me that the end result was a consensus among these people that the current policy toward Ukraine is an improvement over the last administration.

Methinks the only reason they were scared of whatever Trump might do is because certain Democrats, ones they thought they should be able to trust, have been telling them they should be scared.

“Methinks the only reason they were scared of whatever Trump might do is because certain Democrats, ones they thought they should be able to trust, have been telling them they should be scared.”

How many times have I heard it said “if you haven’t done anything wrong, if you have nothing to hide, then an investigation shouldn’t worry you.” That it does worry them ought be taken as implication of wrongdoing / guilt.

Can Schiff just refuse to testify at Senate?

And if Schiff testifies under oath, he will certainly go to jail because he has been lying through his teeth about everything related to these hearings from Day One !