Perhaps they really should have held this protest in Eric Swalwell’s office as he is the most egregious natural gas emitter. 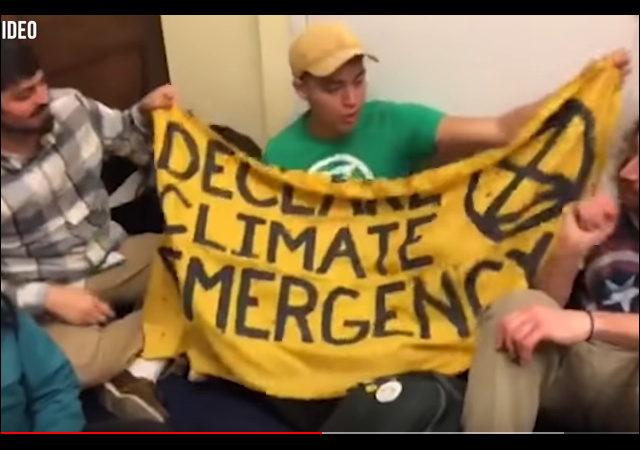 The climate cult Extinction Rebellion protested fossil fuels in the Middle East the last time we checked on them.

Now, the activists have stormed Speaker of the House Nancy Pelosi’s office to mark the beginning of a hunger strike.

Roughly a dozen strikers with Extinction Rebellion are taking part in a global climate hunger strike that nearly 300 people have pledged to join.

They say the House speaker, Nancy Pelosi, is holding back progress, so they are targeting her instead of top Republicans. They are demanding that she meet with them for an hour on camera before they call off their hunger strike.

“Every day the evidence piles up at your desk, but you have yet to pass even symbolic legislation recognizing the climate crisis as a national emergency. With all due respect, you have failed,” the group said in a letter to Pelosi.

Here are some videos so you can enjoy the experience of a Karma visit.

Of course, not everyone appreciates the finesse of these particular protests.

I took my teenagers aside yesterday to show them clips of your “extinction rebellion” action as an example of what they should NOT do and be if they won’t want to be viewed as a bunch of cosplay “activists” who care more about performance than actually getting anything done.

Please stop calling this a hunger strike, it’s an insult to people who have been force fed or died while on true hunger strike protests. You’re drinking salt water and taking supplements for a few days – that’s called a cleanse.

Her office gave them water with fresh lemon slices and wine glasses! I can’t help feeling she recognized how foolish they’d look drinking from fancy wine glasses during their “hunger strike.”

Meanwhile, in Great Britain, the activists demanded to meet with candidates ahead of the new elections in December. They have planned even more disruptions ahead of the #Brexit vote.

In the UK, the protest comes ahead of a snap election, scheduled to take place on December 12. Following a two-week protest in London in October, activists plan to launch another series of disruptive actions ahead of the poll, in a bid to put the climate emergency on the agenda in a Brexit-dominated election.

…Last week, protesters in the UK hand-delivered letters to the headquarters of the seven parties contesting the election, asking for a meeting with party leaders to discuss – on camera – the movement’s demands, which they would like to see enshrined into law. These include setting a target for net-zero greenhouse gas emissions by 2025, and setting up a citizens’ assembly to lead decisions on climate change.

Perhaps they really should have held this protest in Eric Swalwell’s office as he is the most egregious natural-gas emitter in Congress.

They picked this week to do this? Lol.

Why not this week? Is there anything else happening?

A hunger strike. Seriously? Like when a child holds his breath to get his way?

Yeah, I never understood the whole hunger strike thing. Maybe they should just go straight to self immolation, wait, that wouldn’t be carbon neutral!

If they are hesitating because of the carbon footprint, I’d GLADLY buy the necessary carbon credits to put their mind at ease before torching.

I would suggest they be put in a government funded gated community with no fossil fuels.

Break their kneecaps with a crow-bar. Then they’ll have a gaited community.

OMG, they are so going to have exploding diarrhea with the salt water,

This will be so GREAT!

Is it or prerequisite to be a flaming gay to join this little saray?

Just asking for a friend

Gonzo, I don’t have medical knowledge. What makes you say drinking the salt water will have that effect?

How do I say without saying this fraud is a fraud?? Funny how this happens every time the left gets its mammary in a wringer

The little snowflakes were posturing that they were there for the long haul and one stressed the importance of being hydrated and passed around water and a container of salt; but they had a salt flavor substitute for those that did not want salt. These are the science geniuses that we should be following regarding world-wide energy direction.

I tend to think of men as hard-headed realists. These guys believe whatever propaganda they’re fed.

Also seems to be an inordinate number of foreigners among them.

Come to America, land of plenty, to war on having plenty!

Genius! How can we deny the urgency of their cause? It would take a heart of stone to be unmoved by their sincerity.

Almost as funny as a die-in.

Good. With her office out of commission, she can do less damage.

6 males, 1 female. 5 whites, 2 people of color. No blacks, who arguably come from the hottest / driest continent on earth. Whites from the temperate US / Canada / Europe. What do any of these people know about climate crisis? And a gender / racial mix that shames other libtard gender / racial messaging? Pelosi’s office should order a stack of pizzas delivered.

This is the funniest piece of news yet this week. I can’t think of a better target than Pelosi. These children are pointing out the fact that the Dems are spending all their time on a sham impeachment (that won’t go anywhere), and they get anything accomplished.

The way to deal with a child who holds his breath to get his way (or stages a hunger strike) is to walk away and close the door to his room. The way Pelosi should deal with these children is to ignore them and wait until diarrhea hits them, and when they leave to use the facilities, lock them out one at a time.

But she can’t appear to be unsympathetic to these pseudo-environmental leftists, so she will have to do something to soothe their egos. What will she do? I can’t wait to see!

They’re not pro-life. She is not viable. Planned Pelosi?

Maybe Pelosi meets with them an hour after they are all dead from starvation?

There is no civilized reply to Swallwell’s eruption. He gets the last retort.