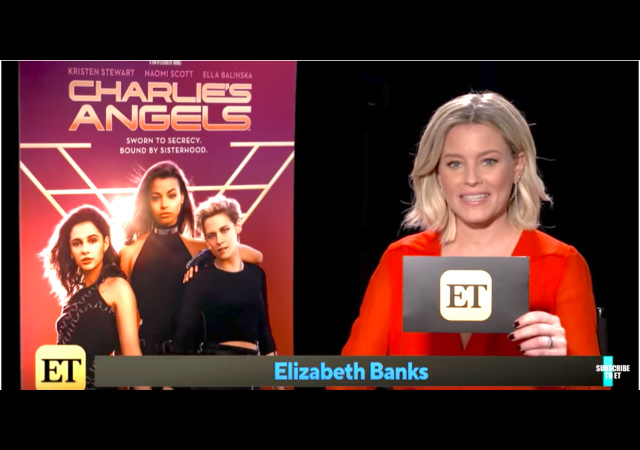 When you cannot accept the fact that your product sucks, pick a card! Any card!

Banks put all her effort into this film as she “wrote, produced, directed, and starred as Bosley” in this film. But it only grossed $8.6 million across the country on a $48 million budget. It opened this past Friday.

Banks had an excuse for that:

“They’ll go and see a comic book movie with Wonder Woman and Captain Marvel because that’s a male genre,” Banks explained. “So even though those are movies about women, they put them in the context of feeding the larger comic book world, so it’s all about, yes, you’re watching a Wonder Woman movie but we’re setting up three other characters or we’re setting up ‘Justice League.’”

“By the way, I’m happy for those characters to have box office success, but we need more women’s voices supported with money because that’s the power. The power is in the money.”

Or maybe people did not want a reboot of Charlie’s Angels? Or maybe your product is just THAT bad?

In 2000, the Charlie’s Angels movie with Drew Barrymore, Cameron Diaz, and Lucy Liu made $40 million in its opening weekend.

The sequel Charlie’s Angels: Full Throttle made $37 million in its opening weekend in 2003.

Um, how about the female movie critics who did not like your movie?

I’m guessing the movie is not fun because Banks doused it with feminism. I mean, Inkoo Kang at Slate admitted that feminism in this version made her “miss the sleazy camp of the old ones.” It looks like Banks concentrated too much on the girl power message that she forgot to have fun.

Kang described the movie as “a checklist of topics from the feminist discourse of the past few years.” Alison Willmore at Vulture agreed in her review, but said the characters received “a girl-power makeover so desultory that you could fill out a bingo card with it.”

Stephanie Zacharek at Time: “But the new Charlie’s Angels, written and directed by Elizabeth Banks (working from a story by Evan Spiliotopoulos and David Auburn), is a shaggy, listless action movie that’s too messy to be fun: It spends so much time advertising how glitzy and sparkly it thinks it is that it comes to resemble a migraine aura.”

There are more female movie critics who hated this film, but I value my brain cells. I didn’t want to read more about this movie.

How many times have 3 scantily dressed women pull this off??? I don’t think men are the issue.

notamemberofanyorganizedpolicital in reply to 2smartforlibs. | November 20, 2019 at 11:07 am

Transexuals must have killed the movie…….

legacyrepublican in reply to notamemberofanyorganizedpolicital. | November 20, 2019 at 1:38 pm

Or, it could be the reboot exchanged the genre where every adolescent boy’s fantasy is a dream of getting caught, handcuffed, and roughed up by one of the sexy super hot Charlie’s Angels for one with women who hate men and boys.

Definitely three ATTRACTIVE women can draw in a movie. These three even look pissed off in the movie poster.

I know for ease you use younger, fitter women. They weren’t pretty and acted well enough to overcome not being super curvy. Also hair that short on a women who isn’t stunning looking doesn’t bring in men.

The demographic for this movie is young men, they don’t need to be preached “girl power”, they aren’t female. It also lacked ANY humor that worked at all.

The only time movies that try as hard as this to be “serious” get famous is because they are funny unintentionally. This doesn’t even do that.

Your sexism blinded you to the fact that you had a terrible movie. Maybe if you were less into hating men and more into telling good stories, you’d have gotten an audience.

Sounds like someone should have done some market research before putting so much money into her concept. First of all, take away the sexy babes, the original Charlie’s Angels wasn’t exactly script-driven. Maybe she could try again with a more woke version of Bay Watch.

Wisdom is the ability to recognize a mistake as you are making it again. CA was a repeat of both, the re-make concept and the default blame when it bombed.

Another in a long line of Hollywood is out of ideas so let’s try this angle.

Right up there with Disney and the let’s make live action versions of all of our animated classics.

didn’t they already do “Baywatch” that way

na, new baywatch was actually funny though and made fun of old baywatch in great ways.

It was called “Babewatch” for a reason. Well, 2 reasons.

Ya know ya dealing with a liberal when . . .

. . . the fault of failure always lies with someone else.

“What are you, some kind of right wing wacko”

Hey Whiny – make a decent product and they will come.

Gotta have some talent to go with the eye candy Cupcake.

Yup, Giada keeps trying to show us her belly button as she makes pasta.

Every time I see stills of this current crop of Angels I ask myself, “Were they going for unattractive?”.

Kristen Stewart is a no talent actress who banged her snow white director and broke up his marriage (which included children). His model wife laid out Kristens lack of morals for all to see. Add skeezy unattractive lead actress on top of 30 year predictable guurrrl power with SJW princesses thrown in and who wants to see that mess. Women like watching male action movies for the eye candy (Keanu) or female action movies to support top rate actresses who are fantastic examples (Gal) (or for eye candy if lesbians).

Men were her audience and were the main audience for the original charlies angels. Elizabeth is just a loser looking for an excuse.

Sexism is true. The three of them combined were not hot enough for males to dismiss their lack of talent and otherwise repugnant excuse for entertainment. Very sexist.

I was going to up vote you but casting Melissa McCarthy in anything is just beyond the pale. So consider this a horrified down vote.

It’s funny she thinks she didn’t make a superhero movie.

Any time you have 95# pixie ninjas beating up 240# men it’s a superhero movie. It’s no less fantastical than Falcon flying or Captain America blocking bullets with his shield.

I’m guessing the real reasons are that it just plain sucks and the public has grown tired of inferior re-makes that are seemingly put out as a cash grab.

The original Charlies Angels came out in the 70’s. The bombshell women stood out back then. But nowadays, one can get more titillation walking past the lingerie section in a Target.

Harvey Weinstein may have been a pig, but he also produced damn good movies. I see the day when Hollywood is really going to regret their PC move to displace ALL competent males.

Men don’t go see movies made by women who think that good story-telling is a patriarchal conspiracy designed to keep women barefoot and pregnant.

I have a dissenting opinion: Elizabeth Banks may be Hollywood’s most talented director evah!

Think about it: she directed a 2019 “Charlie’s Angels” reboot that made the original campy 70s jiggle-fest look like “Masterpiece Theater” by comparison. I don’t think the vulgar cretins on this thread understand that it takes true artistic genius to make something this stupid and unappealing. This movie should be Oscar bait, or the Academy is loaded with womyn-hating male chauvinist pigs.

Consider yourselves properly chastised, peasants! And go see the movie, or I shall taunt you a second time!

I donnewanna talk to you nomo’e, you empty-headed animal food-trough wipe-aire… your mother was a hamster and your father smelt of elderberries!! ??????

I pffffart in your general direction!

Remember how behind the iron curtain, you knew it was a communist hell hole because they had nothing but really awful entertainment that dared to not offend the ones who would come and get you.

It seems now we have nothing but really awful entertainment being produced designed to not offend the ones who would come and get you.

She claims her Charlie’s Angels reboot bombed at the box office because “men don’t go see women do action movies.”

What a strange statement. It’s like she doesn’t actually know any men.

Yeah, but she isn’t wrong. There aren’t a whole lot of female-led action movies in the top gross list; they’re far outnumbered by the male-led ones. Kill Bill and any Alien movie, the Underworld series don’t even make the top 200; Wonder Woman comes in behind Crocodile Dundee. The new Star Wars films are right up there, though.

To normalize the audience, say action movies, since that’s her assertion. Mot many woman led movies in that genre and I’m betting on date night, she gets to choose, so tear jerkers win out.

Now, I’m lazy or I’d normalize all the cited revenue by years earned then convert to today dollars. and include ticket numbers/DVD numbers. Ticket prices keep going up, inflating revenue.

How bad is your movie that you couldn’t even come to some sort of parity the Ghostbusters remake snoozefest opening weekend?

A new variant of the fundamental attribution error .

The only role Banks ever had that was great was when she played the love interest in the Whalburg movie “Invincible”. She was young and fresh-faced with a great attitude. No more. Hollywood has a way of turning nice people into ego-driven monsters!

The really amazing thing is this clown banks goes to Hollywood parties and they stand in a circle believing each other, then they parnter off – usually with people outside their commitments, and have sex. Then they go home stoned.

You have to be a masochist to see ANY Hollywood product, especially netflix/Obama.

Starve them till the current malignant crop retires or dies off. And don’t get suckered in again.

A movie about a trio of PC-approved misandrist she-spies, too busy reciting the writer’s radical feminist talking points to, you know, do much of that she-spy stuff they’re supposed to be good at doing?

Attacking your customers/potential customers is never a good idea, but the woke do it constantly, it’s no mystery why people rejevt wbat tbey are selling

Sexism is the only reason the TV show was a success in the first place.

How then does she explain the success of Michelle Rodriquez, who has been a fixture in action movies for most of her adult life?

Has there ever been a movie with a male hero who likes to beat up women?

Their feminist “heroes” are the female version of incels.

Yup. Generally speaking, they defend women and children to the end.

This is the United States in 2019. It is a religious tenet of the Left that no Leftist is ever responsible for anything that they do that does not work. That lack of responsibility is expanded exponentially for every “PC factor” that can be attributed to the Leftist.

Of course it is the fault of the evil males. They are automatically responsible for anything that goes wrong in the modern theology.

What a crappy excuse for a crappy movie.

She should have came up with something original instead of rehashing a vapid tv series. I haven’t attended but 3 movies in 10 years because in my opinion Hollywood has become stale and irrelevant.

She’s right, sexism is the reason it failed. No one wanted to see her sexist movie.

No Lizzie Banks! Your politics and fascist opinions ensured your film would fail.