Does Anyone Know Why Deval Patrick is Running for President? Does He?

Does Anyone Know Why Deval Patrick is Running for President? Does He? 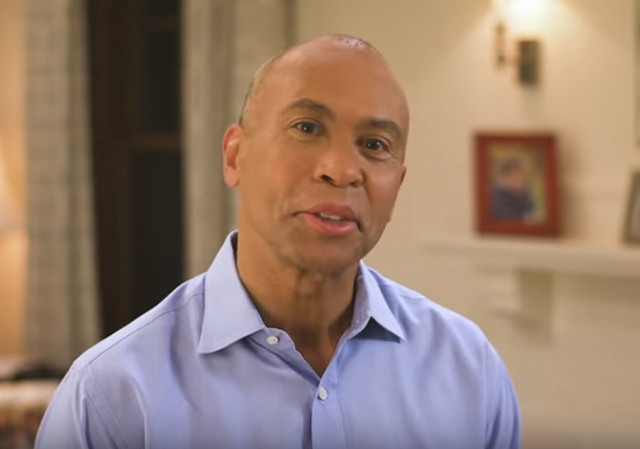 Former Massachusetts Governor Deval Patrick has made it official. He is joining the race for the Democratic nomination in 2020.

The question many people are asking now is: Why?

The field is the largest in history and is in full swing. Democrats have already had multiple debates. Why is he doing this? Just look at Twitter, and you will see thousands of tweets asking this question:

why why why is Deval Patrick running for president. why.

Why is Deval Patrick wasting his and everyone else’s time?

I could go on, but you get the point.

Patrick tried to explain his rationale to CBS News:

“I’ve been waiting for a moment like this my whole life,” he said. “I don’t mean a moment to run for president but a moment when the appetite for big ideas is big enough for the size of the challenges we face in America.”

Patrick said he spoke with former President Barack Obama prior to his announcement and both agree that “we need to reach for the best of America.”

Patrick has spent the last several years working as an executive at Bain Capital. Would you believe Bain has already scrubbed his bio from their website?

Patrick’s announcement has been greeted on the left by a loud, collective groan.

In a Democratic presidential field rich with both centrist pragmatists and progressive warriors alike, former Massachusetts Gov. Deval Patrick stands as the answer to a question no one has thought to ask: what does a former oil company executive and venture capitalist think?…

Like Frito-Lay desperately trying to cram one more flavor of Doritos into America’s snack-swollen stomach, Patrick sees a Democratic presidential primary that has already witnessed the rise and fall of nine other candidates as missing one key ingredient: himself.

Deval Patrick, former governor of Massachusetts and newly-resigned executive of Mitt Romney’s private equity firm Bain Capital, has entered the Democratic primary race, which is shaping up to be the biggest ensemble-disaster comedy since Cannonball Run.

Patrick’s entry comes after news that former New York Mayor Michael Bloomberg put himself on the ballot in Alabama and Arkansas. It also comes amid word from Hillary Clinton that “many, many, many” people are urging her to run in 2020, and whispers in the press that an “anxious Democratic establishment” has been praying for alternate candidacies in a year that had already seen an astonishing 26 different people jump in the race.

Curious just who was blowing smoke up deval Patrick’s butt that convinced him this was a good idea, and what wizard did they intern with.

Here’s my suggestion for his campaign slogan.

Deval Patrick 2020: The answer to a question no one was asking.

Love all the dirt that is coming out in the first week.

Fired a government employee to protect a rapist. All the cool, cool cash he collected for having no other qualification than being a Democratic politician.

The Democratic brand of corruption and #metoo projection is being firmly cemented in voters minds I hope.

“All the cool, cool cash he collected for having no other qualification than being a Democratic politician.”

Ummm… I think you may have missed his one other “qualification.”

Why? Because he didn’t want to miss out on all the fun! Kinda a democrat-for-president ‘MeToo’ movement thing.

I think the biggest takeaway from Patrick’s announcement is his conversation and support from Obama. I imagine Joe is seething.

Joe may be seething but he shouldn’t be surprised. After all, Patrick has one quality Obama prizes that he doesn’t have: he’s black.

He’s also authentically black–something that obongo can’t say, no matter how much he want you to believe it.

The Dem Party isn’t interested in any new voices or ideas. Why does it need someone else who can only agree with the insanity that the others have already laid out? None of the current runners can dare to take a step away from the radical left agenda without being torn to pieces. It’s the message, not the messenger, that’s a turn off for normal, sane Americans.

He can deal the AA race card like no other … except jug ears. Maybe a Patrick-Big Mike ticket is in the offing.

This guy really does have fascistic inclinations, but, for better or worse, isn’t very good at it.

Recall that in the search for Tsarnaev, he basically closed downtown Boston, with the loss of I don’t know how many millions in business, and then as a encore had an entire town searched at gunpoint (so much for “probable cause”). And still couldn’t find the guy. After the gendarmes stopped driving people from their houses with machine guns and let everyone go back to normal, the fugitive was found within twenty minutes. Lesson: The American public is far more effective than the clown-car police state. Lesson learned . . . but not by Deval.

Then just to show he was on top of things, he closed all the public roads after a particularly heavy snowfall in SE Mass., ostensibly so that utility trucks could get around town and restore power lines. Unfortunately the closure made it impossible for people freezing their chitlins off to go to any of the heated shelters which were set up specifically for people who were, well, freezing their chitlins off. A big “oopsie” on that one, Gov; next time spend five minutes thinking it through before unleashing your inner totalitarian.

His response to the Boston bombings was the same as all other Dem mayors or governors. The first thing they do is to nullify the Constitutional rights of the citizens. What that tells me is that, as obama said, the Constitution is only a piece of parchment that is a negative charter telling the states what they can’t do. Can we imagine what our country would be like without our Constitution?

There are exactly 2 possibilities:

1. Someone offered enough financing that he thought it would be worth milking it for a while. And he expects to land an even better empty-suit kind of job after he shuts down his campaign.

2. He is so delusional, he actually thinks he can win. This flirts with “a danger to self and others” level of mental dysfunction.

In neither case is he a serious candidate.

I lean towards consultants who want to make money off a candidates run, but conspiracy theories are way more fun than follow-the-money!

I’d go with #1. His professionals expertise is finding high paying window dressing roles and I suspect Bain was tired of him so he needs a new mark come 2020.

Anyone who can poll over 1% in this race can collect a *lot* of valuable i.o.u.’s. Patrick knows this.

“[Patrick] is joining the race for the Democratic nomination in 2020. The question many people are asking now is: Why?”

Wants to make sure his AA card is still good.

This is another like the Obamas who skated through life on AA, and are wealthy for having done it.

It is being reported that Obama persuaded him to run so as to target Biden’s popularity among black voters. It’s not about Duval winning the nomination but taking out Biden once and for all.

IMHO, this also takes out Hillary whose only chance was a brokered convention with Biden throwing his delegates to her in the first round.

Precisely what I was going to say.

He has a near zero chance of getting the nomination, so the motive is something else.

Does that mean you think Obama wants Warren to be the nominee? I have a hard time believing that.

Obama doesn’t want HILLARY to be the nominee. He doesn’t care a whit about Warren being the nominee. It’s about positioning for 2024. No Dem is going to win in 2020. Warren getting crushed would clear the decks for new blood to come in (the Squad). So who gets crushed by Trump next year is very, very important.

This is not a soap opera. It’s politics. There too many commenters here who simply can’t rise above the Dem vs Rep, lib vs con kabuki. It’s now Trump vs the Uniparty Swamp.

Obama wants to pick the 2024 nominee so as to push ahead with his radical progressive globalist vision. He need to wreck the Democrat wing of the Uniparty just as Trump is doing with the GOP wing.

Why? Because he missed his chance in 2016. He was supposed to be the 0bama machine’s candidate, and the final slap in the face to Hillary. Then he went and got trounced by Charlie Baker in Massachusetts and suddenly a national run didn’t look like such a good idea. Now he sees everyone and his dog going for what should have been his place, and it hurts.

Oops, that I tag should have been closed after “in Massachusetts”.

He never ran against Baker so your post makes no sense.

Actually he did, in 2010, but he won, so your point stands. Still, he did so poorly that he lost his state for the Dems, which wouldn’t have reflected well on him if he’d been put up against Mrs Clinton.

Cadillac deValle, the lightest of lightweights!

Coup deVal: Fake it till you make it.
Meanwhile belly up to the trough and get while the gettin’s good!

He’s pals with the OVerlord what else do you need to know?

I am convinced that many of these leftists who are running are doing it for the title. Any time they get on the news from this point on they get referred to as a candidate to be president which sounds so much cooler than ex- governor or mayor or Congress critter.
There are some who cannot possibly think they have a chance.

Deval Patrick is not a moderate even by today’s standard.

As a Mass resident, trust me, Patrick was a disaster. He’s truly an empty suit (size small), with delusions of adequacy.

Does Anyone Know Why Deval Patrick is Running for President?

Gee whiz, mom! All the other kids are doing it…!

” eyes don’t have the qualifications to be president mommy but
can eyes be ah astronawt ? “

Deval is a FOO (Friend of Obama) which is enough for me to say No Way Ever.

It has been reported that Patrick donated money to LaGuer who is serving life in MA for the violent rape of his neighbor. Patrick denies this but he does admit to providing him with counsel and support.

LaGuer would become a cause celeb amongst the liberal elite in Boston who finally convinced local law enforcement to re-examine the case and run a DNA test. In the end, the test results confirmed that LaGuer was the perpetrator of the crime.

Keep in mind, people do prefer candidates with executive experience. Right now that is Biden, mayor Pete, and Steyer. Biden is mortally wounded, Steyer is a hated billionaire, so Mayor Pete has been sucking up their supporters. Pete has very weak support, so anybody with any executive experience (and no stupid sounding name like Hickenlooper) will get noticed.

Who is angrier at this development, Warren who I assume expected Patrick to be an ally given their MA connection and Patrick’s history of defending Warren in the face of the Native American fiasco or Biden who Obama has clearly decided is not a viable candidate?

He’s running so that he can be Michelle’s pick for Vice Presidential candidate at the brokered convention.