Wang “William” Liqiang defected to Australia, claiming to know how the Chinese meddle in foreign elections. The Chinese government claims that he is a fraud. 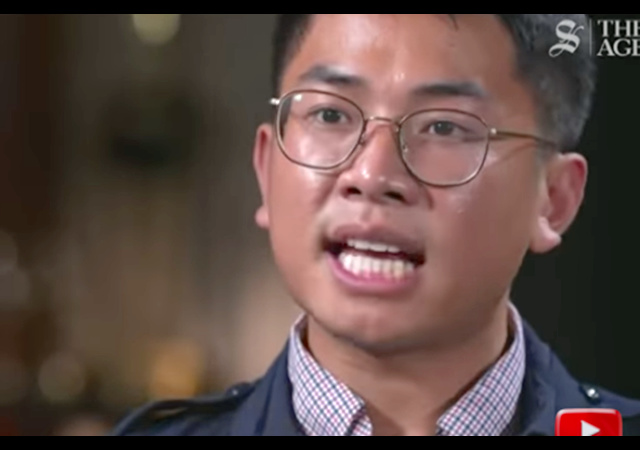 Last week, a man proclaiming to be a Chinese spy defected to Australia and offered a trove of unprecedented inside intelligence on how China conducts its interference operations abroad.

Wang “William” Liqiang is the first Chinese operative to ever blow his cover. He has revealed the identities of China’s senior military intelligence officers in Hong Kong, as well as providing details of how they fund and conduct political interference operations in Hong Kong, Taiwan and Australia.

A sworn statement Mr Wang provided ASIO in October states: “I have personally been involved and participated in a series of espionage activities”. He faces certain detention and possible execution if he returns to China.

…The mainland’s intelligence efforts included creating more than 20 media and internet companies to launch “targeted attacks”, and investing about US$200 million over an unspecified period in television stations in Taiwan, the report quoted Wang as saying.

Move over, Ukraine! Authorities in Taiwan have begun an investigation to determine if there is interference in its upcoming presidential election, as well as illegally influencing past elections.

Officials from the island’s security and investigation agencies are also looking into allegations that Han Kuo-yu, the presidential candidate for the mainland-friendly Kuomintang (KMT) party, accepted a 20 million yuan (US$2.8 million) donation from Beijing in the run-up to his victory in the Kaohsiung mayoral election in November last year.

The government had “taken serious note of the case” and “national security units have set up a committee to follow up” on evidence already collected, the presidential office said in a statement on Saturday.

Some Western diplomatic officials believe the claims by Wang to be reliable, at least in part.

Mr. Wang’s account, a 17-page plea for political asylum in Australia, reads in parts like an espionage thriller. He detailed code names of covert operations, shadowy business ventures and ultimately his dawning disenchantment with what he described as China’s efforts to stifle democracy and human rights around the world.

“I do not want to see Taiwan becoming a second Hong Kong,” he wrote. “And I would not become an accomplice in the conspiracy of turning an originally democratic and free land into autocratic land.”

How are the Chinese responding to Wang’s assertions? Shanghai officials say that the “spy” is a fraud.

Shanghai police said Wang – described as a 26-year-old unemployed worker from Nanping in the southeastern province of ­Fujian – was given an 18-month suspended sentence in October 2016 for fraud by the Guangze county court in Fujian.

According to an online document in the case, Wang “made up fictional facts and concealed the truth” to defraud a father of two children of 120,000 yuan (HK$133,400) after offering to get the children into a special school in 2015. At that time, Wang was a student and it was his first offence.

Wang is currently at an undisclosed location in Sydney on a tourist visa, seeking urgent protection from the Australian government. Wang’s minders have been urged to “double-up” protection duties as experts fear for his safety.

However, in addition to Wang’s claims, an Australian TV news station reported that Beijing tried to install a Chinese spy as a Member of Parliament (MP).

The allegations – first aired by local network Nine – assert that a suspected Chinese espionage ring approached a Chinese-Australian man to run as an MP.

The 32-year-old man has since died in unexplained circumstances.

China has denied the allegations, which Australia’s domestic spy agency has confirmed it is investigating.

In a rare public statement, the agency said it was taking the allegations seriously.

Mr Morrison said he found the reports troubling, but warned against “leaping to conclusions”.

This is kind of funny, he sure is jerking China’s chain, successfully it seems.

Occam’s Razor dude – the simplest and most believable scenario is usually and most likely true. China is totally doing this.

20 mil to influence HK and Australia?

How many BILLIONS are they spending to corrupt our universities and bribe our politicians??????????????

In America the Biden’s sellout the country for a fraction of that. And AOC and squad would pay China for help in destroying America.

Why would it surprise anyone that China has spent money to influence elections? We do it, Russia does it, the UK does it, heck.. private citizens do it. Are there actually people in the world who don’t know that?

Boys will be boys.

Shame on Leslie! Attempting to relate Trump’s version of truth to power by somehow legitimizing his conspiracy that the Ukraine (with help from the lowly Bidens), not Russia, interferred with US elections. There is no mention of the Ukraine in the China spy story and not a single piece of criminal evidence has been offered to prove anything – except the salary paid to Hunter Biden from Burisma.

Yes, this is one of the few areas I diverge from Trump. But it is also where I diverge most violently from the democrats.

Well, of course China is trying to finagle elections in other countries. That’s by far the cheapest and safest way to encourage them to do what China wants. (By “safe” I mean there are no serious repercussions if the attempts fail or are discovered, unlike, say, staging a surprise bombing attack on another country’s fleet.)

However, if this info is believed to be accurate, it’s sheer folly to publicize it. First Rule of Intelligence—you never let your opponent know what you know about him.

Flooding another country with your illegal immigrants establishes a fifth column audience of non-assimilated targets to mobilize against a complacent host population. We have learned that taking the high-road against a corrupt, determined enemy doesn’t work. We might now be relearning where bigotry originated.

Maybe discrimination becomes essential at some point in order for those who understand the frailty of freedom and can keep it? In the blind pursuit of “brotherhood of man”, to many of us have forgotten the “nature of man”.

Freedom may come at a cost but the cost of the alternative is unacceptable. We need to simplify and work on problems we know how to solve and are willing to solve them… before it is too late.

Clearly the Chinese dont need to worry about spending money in the States as the Democrats are only to happy to help them out undermining America.

Look closely at this guy. 26 does seem rather young for a knowledgable operative. On the other hand, China is not above planting a fake news story about someone who’s yanked their chain.