Democrats Claim To Hate Dark Money, But Didn’t Mind Using it in 2018

Democrats Claim To Hate Dark Money, But Didn’t Mind Using it in 2018

“These kinds of totals aren’t unheard of. I do think they’re unheard of on the liberal side. I think that’s what’s so striking about this.” 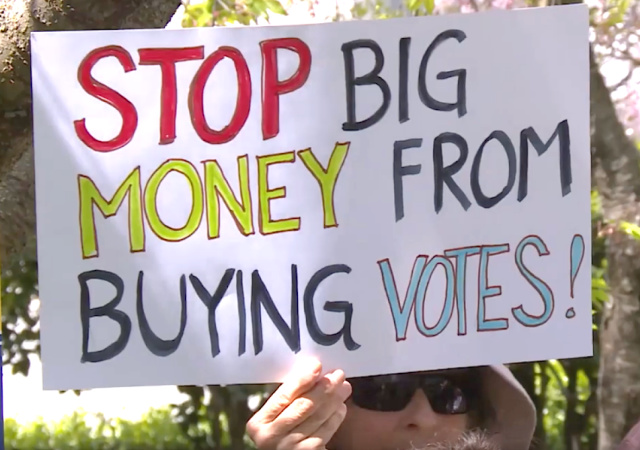 A few reports have emerged about a few little-known groups that have funneled millions into political races and fights to prevent President Donald Trump’s appointments. It looks like a lot of this dark money helped the Democrats take back the House in 2018.

This is dark money because these nonprofit groups do not have to disclose its donors. Sixteen Thirty Fund received $51.7 million from one anonymous donor.

In 2018, Sixteen Thirty Fund “operated under four dozen trade names” like Arizonans United for Health Care and Floridians for a Fair Shake. The groups used money from anonymous donors “to pressure Republican members of Congress on their stances on health care, taxes and the economy through TV ads and grass-roots organizing.”

Sixteen Thirty Fund sent $10 million to Colorado along with $6 million to Michigan and $2.65 million to Florida.

It has puzzled many people:

The Sixteen Thirty Fund’s rise last year is a sign that Democrats and allies have embraced the methods of groups they decried as “dark money” earlier this decade, when they were under attack from the money machines built by conservatives including the Kochs.

“In terms of the size of dark money networks, there are only a few that have gone into the $100 million-plus range,” said Robert Maguire, the research director for the watchdog group Citizens for Responsibility and Ethics in Washington and an expert in political nonprofits.

“These kinds of totals aren’t unheard of,” Maguire added. “I do think they’re unheard of on the liberal side. I think that’s what’s so striking about this.”

Sixteen Thirty Fund executive director Amy Kurtz provided the usual runaround, stating the nonprofit “provides support to advocates and social welfare organizations around the country, and we are pleased with the growth we had in 2018.”

This group is closely connected to Sixteen Thirty Fund because it shares the same founder: Kessler.

Arabella Advisors has other groups beneath it:

A host of liberal advocacy groups sit beneath those two organizations using the tax-exempt status they provide. While a Politico report indicated that the Sixteen Thirty Fund spent $141 million on Democratic causes in 2018, that represents just a fraction of the total sum of money passed through Arabella and its fiscal sponsors to smaller activist groups last year.

According to the latest tax forms from the New Venture Fund, $373 million flowed through the group, making it by far the largest entity operating under Arabella’s auspices. The Hopewell Fund, also managed by Arabella, spent $78 million. Another group devoted to environmental causes, the Windward Fund, spent $13 million. In total, liberal donors combined to pour $622 million into the four Arabella groups in 2018.

But some information about its funding can be gleaned from the tax forms of other organizations, which show a connection to liberal billionaire George Soros’s network of left-leaning groups.

The Washington Free Beacon previously reported that Demand Justice received $2.6 million from Soros’s Open Society Policy Center, for example. Fallon also appeared around the same time at a gathering of the Democracy Alliance, an invite-only club of progressive millionaire and billionaire donors that was cofounded by Soros. Sixteen Thirty previously paid the Democracy Alliance hundreds of thousands in consulting fees. The alliance also lists the fund in confidential documents instructing donors on where to route money for part of its $275 million spending plan for the 2020 election cycle.

The group, like Sixteen Thirty Fund, does not have to disclose its donors:

In addition to housing a plethora of liberal groups, the funds at Arabella also pass hefty amounts in the form of grants to outside progressive organizations.

Some states have not brushed aside the fact that this dark money has influenced some elections and initiatives.

Mlive.com reported that $9 million dark money landed in Michigan. The filings showed the money went to Secure Michigan Elections and Michigan Families for Economic Prosperity along with other projects:

Sixteen Thirty Fund fund was a major donor of Count MI Vote, the affiliated nonprofit for Voters Not Politicians, which led the successful 2018 ballot initiative to create a bipartisan redistricting commission. Sixteen Thirty Fund gave $6 million to the effort in 2018, a sizable chunk of the overall $16.4 million donated to Voters Not Politicians.

Sixteen Thirty Fund also gave $1.76 million to MI Time to Care, a ballot measure committee created to put a paid medical leave proposal on the 2018 ballot. Republicans in the Legislature adopted and amended the proposals instead of letting them go to the ballot.

People in Michigan have expressed concern with this dark money:

Simon Schuster, executive director for the Michigan Campaign Finance Network, said the documents offer a glimpse of the influence dark money groups can have on elections. Sixteen Thirty Fund isn’t required by the IRS to disclose its donors and is exempt from registering as a charity under Michigan law, creating an incomplete picture of where support for candidates and ballot initiatives are coming from.

“One of my major concerns with the structure of organizations like this is that there’s a significant lag in reporting,” Schuster said. “This organization can have a broad influence on an election, but because they don’t have to file the documents that disclose their spending, then we don’t even know the extent of their influence until long after the election.”

Rank-choice voting won in New York City, but it turns out the initiative had support from the hated dark money:

The Committee for Ranked Choice Voting NYC, the good-governance conglomerate responsible for most messaging on the issue, spent $986,017 on digital, television and direct mail advertising — capped in the campaign’s final weeks with TV spots featuring Academy Award-winning actor Michael Douglas.

But none of these spots were required to include “paid for by” information, leaving the moneyed proponents of so-called RCV a mystery to most. Those curious enough to seek further information could learn how much the committee spent — but not where the money came from — using the city government’s “Follow the Money” online portal.

Learning the identity of the donors required navigating the state Board of Elections website. It shows the committee received almost $2 million in contributions — 95 percent of which came from just five donors. The Action Now Initiative gave $1 million, but understanding the names behind that group requires another trip down the disclosure rabbit hole. Another $500,000 came from James and Kathryn Murdoch, a son and daughter-in-law of media mogul Rupert Murdoch who have recently signaled a willingness to invest big in democracy reform.

City Councilman Brad Lander wants to change the laws by expanding “the current disclosure requirements for donations in local elections to include ballot proposals.” The laws only allow donor disclosures “for political messaging related to candidates.”

One consistent hallmark of a socialist democrat/liberal is that they are always trying to count someone else’s money. Greed and congenital thievery.

You mean Democrats are doing exactly what they accuse their political enemies of doing? I’m shocked, I tell you, shocked!

All us “little people” have to disclose our names, addresses, occupations, and employer if we donate more than $200 to a campaign but, as we know, the same rules don’t apply to the elites.

I am certain that when they applied to be recognized as a tax exempt organization that the IRS rubber stamped them unlike the tea party which was completely open about their activities.

Eric Holder was a big push behind the Voters Not Politicians redistricting lie in Michigan.
Voters here aren’t real bright and when I’d point it out in other forums no one cared or understood.

Virtually all of the biggest donors are Democrats now.

Wall Street donates to D’s over R’s at about a 9:1 ratio.

And, of course, the biggest money of all is the government employees union. In Presidential election years, they alone account for at least half a billion in political spending.

To them, its an investment – with very tangible returns. They get 10x back in taxpayer $$ for whatever they “donate”.

Nothing comparable on the R side.

R’s, if they weren’t the “stupid Party” would systematically go about defunding the Democrat Party whenever they hold power – simply by terminating the transfer of taxpayer $$ to Democrat vested interests that kick back part of it to keep the gravy flowing.

Democrat tax rhetoric claims to hate the rich, yet the rich are overwhelmingly Democrat, especially the billionaires.