“The Midlands Beer Garden will open its doors at 9:30 a.m. Wednesday to show the hearings on two 100-inch projectors.” 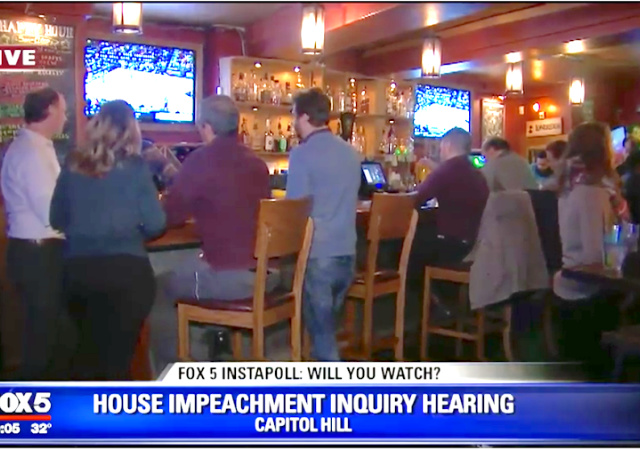 Oh, how I love capitalism!

Washington, DC, bars will open early on Wednesday and offer drink specials due to the first public impeachment hearing. From NBC Washington:

[Union Pub] Attendees will be able to choose from a variety of themed specials, such as Union Pub’s “ImPEACHment Please” and The Partisan’s combo that features Colonel E. H. Taylor whiskey. The whiskey was chosen for Ukraine Ambassador William Taylor, who’s set to testify Wednesday along with George Kent, the deputy assistant secretary in Washington.

Bars in DC tend to do this when something huge happens. A lot of them took this route when Robert Mueller and Michael Cohen testified before Congress.

Shaw’s Tavern had a line down the block before James Comey’s testimony.

The Hill published even more specials:

Duffy’s Irish Pub, in the District’s H Street NE neighborhood, will feature what it’s dubbing “happy hearing hours,” with $5 rail drinks and $2 off all drafts and wine during all impeachment hearings. The watering hole — which boasts eight large, flat-screen TVs with a “stadium sound” system — says it’s also whipping up a pair of impeachment beverages to mark the occasion. Bartenders will be serving a “Subpoena Colada” and a drink called “James and the Giant Impeachment.”

The Midlands Beer Garden will open its doors at 9:30 a.m. Wednesday to show the hearings on two 100-inch projectors. The Georgia Ave. spot will be offering $6 Irish coffee and mulled ciders. Co-owner Robin Webb also noted that the establishment has a large bottle of champagne behind an enclosure with the message “In case of President Pelosi, break glass.”

Hawk ‘n’ Dove, one of Capitol Hill’s oldest dining and drinking destinations, will open at 10 a.m. on Wednesday and serve up its happy hour menu all day. TVs will be tuned to the impeachment hearings, a general manager tells ITK, for patrons to watch the goings-ons on just blocks away from the proceedings “live with audio.”

Only DC gives a hoot.

Rest of the country shrugs. No one cares where I live except for hyper partisan Democrats.

So the question is whether the Republicans are smart and seek every opportunity to drag this out as long as possible? Same in the Senate. Hopefully we know the final outcome (freakin RINO’s you never know), why not make them pay all the way to summer?

Every time they say Russia you have to take a shot!!!

Make up some bingo cards with terms as Russia, Ukraine, Collusion and Quid Pro Quo. First Bingo gets showered with a subpoenas to be the next witness.

Add in a card for Emolument Clause.

Adam Schiff is now talking about bribary. You could indict all of Congress on that charge.

Knowing Schiff, he might be referring to the Bribary Coast.

as unhinged as they are over all this, i think we’re already past “cut off time” and into 86 territory.

someone call them a cab.

Someone with my sense of humor.

Great minds…. and a touch of insanity helps.

Are they trying to put their customers to sleep?

Even if I lived in D.C. (and I don’t) these bars would have to be giving out free beer to get me to come in and watch this Schiff Show.

Just waiting for a hand to appear in the Democrat House chambers and start writing on the wall “you have been weighed in the balance…..”

Let the DC crowd enjoy their time left before the reckoning.

This is a great opportunity for AOC to make a little extra cash moonlighting as a bartender.