CNN’s Jeffrey Toobin: Witnesses Having No Contact With Trump is ‘a Problem’ for Impeachment

CNN’s Jeffrey Toobin: Witnesses Having No Contact With Trump is ‘a Problem’ for Impeachment 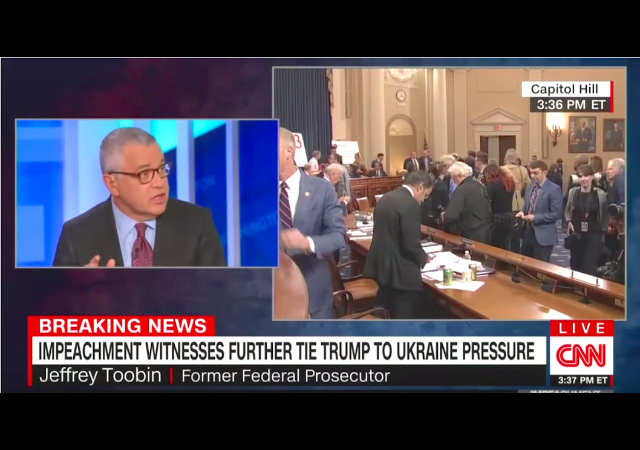 CNN legal analyst Jeffrey Toobin admitted that the witnesses in today’s impeachment hearing not having contact with President Donald Trump could cause problems for the Democrats.

However, the Republicans on the committee “specifically questioned” the two men “about their previous testimony which relied heavily on second- and third-hand knowledge.”

Then Taylor brought up an unknown phone call between Trump and EU Ambassador Gordon Sondland, which happened a day after the president spoke to Ukrainian President Volodymyr Zelensky.

Sondland allegedly told Trump the Ukrainian government was “ready to move forward with an investigation of the Bidens.”

Taylor found out about the phone call because Sondland made that phone call in front of an associate of Taylor.

But despite that new evidence, Toobin pointed out a problem:

“[That call is] important, because the one criticism of these two witnesses, which I think is very much legitimate, it’s not really a criticism, it’s just a factual statement is that neither of them had direct contact with the president. Ever, and that’s a problem if you’re going to impeach the president,” he added.

Ya think?
Everyone knows this is going nowhere.

notamemberofanyorganizedpolicital in reply to Colonel Travis. | November 14, 2019 at 9:49 am

This is how you get more Trump even beyond 2024.

“Sondland allegedly told Trump the Ukrainian government was “ready to move forward with an investigation of the Bidens.”

So what? The transcript has POTUS asking for investigations into corruption. Do democrats believe this supposed to be a “bombshell”…. second-hand info of the President doing his job and following up on investigations?

““Sondland allegedly told Trump the Ukrainian government was “ready to move forward with an investigation of the Bidens.””

Schiff for brains is the one who added Bidens name in his so-called clarification, even though Taylor never said it.

This whole thing is BS. I’ve heard it described as “A cold civil war.’ If they impeach Trump over this, I predict it heats up pretty quick.

This sham is never meant to go to the Senate. They are going to trot out their witnesses, then when Barr brings out the IG report, and Durham starts indicting FBI officals past and present, they fold up their tent and go home. They know if the Senate gets hold of this, the first witness called is Schiff, who will not take a chance on testifying under oath, because he is a bigger liar than he claims Trump is. Schiff makes the rules in his star chamber, but McConnell will have a field day ripping him limb from limb, slowly, for all America to see. Not to mention the fact that a trial will take 6-8 weeks, right in the middle of the primaries. Trump being exonerated while the country is watching will rule the airwaves and suck what little oxygen there is remaining from the Dems POTUS hopes.

Why can’t the Senate start holding hearings now? The could investigate the origins of the House impeachment move and have Shitt and the whistle blower testify along with lawyers explaining why there’s nothing wrong with using a special envoy or investigating corruption that occurred during Obama’s reign. Why does Biden get immunity from investigation of possible crimes just because he might run for office?

This goes straight to the “No Shit Sherlock” file.

If at least 218 Democrats are hell-bent on impeaching DJT, they will do so regardless of what these hearings reveal. There’s no limiting principle when it comes to the vote. Loons like Maxine Waters or Al Green said they’d have voted for impeachment the day after the 2016 election. These are irrational people of course, but if there are at least 218 of them, then . . .

The weird thing is they somehow thing this will enhance their chances in 2020, when the opposite is more likely to be the case, even with a full court lying media press.

The dems know they don’t have a REAL contender and the only way they can beat Trump in 2020 is to have him out of the picture.

Unscrupulous yes, but we’re talking about the dems here.

This has been my opinion ever since that clown car drove into the big tent. Even before Biden was talked into getting involved. In fact, bringing him in was a clear indication that the original bunch didn’t pack the gear.

The only way to get rid of Trump is to successfully impeach him; they cannot rely on the election, and they know it.

Of all the Dem contenders Sleepy Quid Pro Joe was about the least crazy of the lot.

He really is the Dems only real hope. All the others are either mired in hate police groups, life long lies, privilege and racism.

The Dems stand no chance either way. No way do they get 67 votes to convict in the Senate now that this farce is slowly unraveling. Watching that sanctimonious ass Taylor talk yesterday, then having to admit he has never even met Trump was worth the price of admission alone. Any GOP Senator who wants to be reelected will never vote to convict, and I don’t think the Dems even want this to go to the Senate, because it’s too late in the process to help them. They are going to try to smear Trump as much as possible, then as soon as Barr and Durhsm start naming Dem names, they’ll make some BS excuse and fold this sham “investigation” up.

There are Congress critters from commie districts like SF who face no consequences for acting like Nazis.

And then they’ll go before voters arguing that they’re not crazy — many of them in districts Trump carried in 2016 and will carry again in 2020.

Has a transcript of this call come out yet?

As for the aide saying that Trump cares more about the Biden’s than the Ukraine, Taylor was an ambassador to the Ukraine and he’s willing to completely trash US relations with them over a snotty comment from an aide? Wow. A sad way to be remembered.

Trump’s superpower is that he somehow gets individuals who appear to be virtuous to gleefully rip off their mask and expose their lack of morality for all to see.

The left is utterly clueless.

Their real problem is that they can no longer control the messaging through their Democrat media (I repeat myself).

Trump has truly broken them.

Folks, this charade in the House is already backfiring. The portion of D Hell bent on conducting an impeachment inquiry over what at best is a policy disagreement between career State Dept and the President, who is the person responsible for setting the policies, has demonstrated that:
1. the Never Trump types won’t miss an opportunity to oppose
2. the ‘deep state’ career bureaucrats truly exist and are on display for all to see live and in colour
3. The procedure followed to date in the HoR is a farce

Assuming that the HoR actually votes for impeachment vs stepping back from the precipice and simply voting to censure once this arrives in the Senate then the Senate creates the rules it will follow. Personally I would recommend they adopt the Federal rules of Procedure. Then conduct evidentiary hearings before the entire Senate calling each witness plus the disallowed witnesses; Adam Schief. Then disallow the hearsay testimony.

That serves two purposes, first it requires the presence of all Senators, including those running for President. Secondly, it would force all these witnesses to answer questions from an appointed counsel following Federal court rules. What could be more fair than that is the PR message to the voters. All live and in colour. Draw every ounce of blood out of the D for wasting time on this farce and preventing the people’s business from getting done; USMCA.

Make the vulnerable D in red states explain the voters why they choose to follow this farce.

The Senate shouldn’t wait for the House to convict as that would allow them to drag out the impeachment farce till after the election. The Senate could hold hearings and have the witnesses Schit disallowed including Shit, Biden and son, the whistle blower and those with non-hearsay evidence testify.

What I don’t understand is what’s wrong with Trump having an investigation of corruption and even encouraging the Ukrainians to cooperate? Biden’s involvement with Burisma and Ukraine cry’s out for an investigation to see if prosecution is warranted. That is exactly what Trump was doing.

I don’t understand why the Dims want to overlook possible corruption in their candidates for President. It didn’t work out well for them in 2016. It would be just as bad in 2020. Trump is doing them a favor by making sure that Biden isn’t a crook.

For that matter, what would have been wrong if he had asked Putin to send the DNC emails to Wikileaks? That is why I never paid much attention to that whole “scandal”; I started with “let’s assume the Dems are right, so what?”

I have it on good authority that both Harvard and Yale have asked their respective book stores to order Quigley On Evidence as the preferred horn book for case preparation.

The witnesses not having contact with the president can also be a problem with them being called witnesses.

THat’s a point Lindsey Graham made in his interview last night. He said that if it comes to a Senate trial, he will allow NO hearsay evidence, only direct testimony. And if they have none – well, that won’t be hard to decide, will it?

Why are the allowing hearsay testimony?

The progressive fascists won’t hold the impeachment vote until after the election. The point is to smear Trump with lies in the hope that he will lose the election.

“The only way to get rid of Trump is to successfully impeach him; they cannot rely on the election, and they know it.”

A Democratic Senator or Representative whose name is Green has said that Trump must be impeached to prevent his winning the 2020 election.