When are they going to check to see if Trump correctly uses the word “the?” 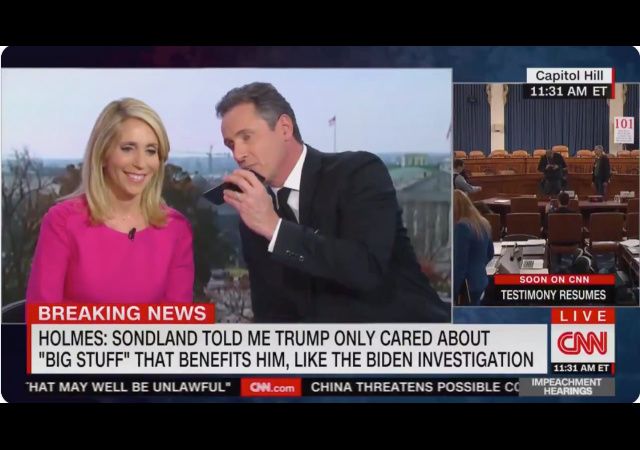 The media has to fact check President Donald Trump over every little thing he says or tweets.

Political counsel at the US Embassy in Ukraine David Holmes claimed he heard Trump speaking to US Ambassador to the European Union Gordon Sondland “through the earpiece” of the latter’s phone.

I have been watching people making phone calls my entire life. My hearing is, and has been, great. Never have I been watching a person making a call, which was not on speakerphone, and been able to hear or understand a conversation. I’ve even tried, but to no avail. Try it live!

Have you been able to eavesdrop on a conversation taking place on an earpiece? Sometimes you can hear the voice, but have you ever clearly made out the conversation?

High and mighty Cuomo had the determination to prove ORANGE MAN BAD.

You guys. Watch this. I cannot stop laughing.

Because we are in the absolute dumbest timeline, Chris Cuomo calls his mom on live TV to disprove Trump’s claim and demonstrate to viewers that bystanders can hear a caller on the other line…and we only hear his mother when he puts her on speaker. pic.twitter.com/Bif8QsmPHb

From The Daily Beast:

“Very interesting theory from our president that he has really good hearing, some would say, the best hearing ever, and he has never been able to hear a phone call when it wasn’t on speakerphone from anybody,” the CNN anchor declared. “So, let’s just play with that for a second.”

Cuomo went on to dial-up his mother on his cell phone, asking her: “Mom, can you hear me?” CNN viewers, however, heard nothing in response.

Holding the phone up next to his colleague Dana Bash, Cuomo then requested that his mother say hello to the CNN correspondent. While there was once again silence, Bash awkwardly glanced at the camera as Cuomo fumbled with his phone.

After eventually switching it to speakerphone, Cuomo once again asked his mother if she could hear him, finally prompting a response the audience could hear. Changing the phone back to normal mode, he then wanted his mom to say hello to Bash. As Bash attempted to hold a conversation with Mrs. Cuomo, CNN viewers again heard nothing on the other end of the call.

The Hill’s Joe Concha tweeted Cuomo’s stunt “is the most ill-advised thing we’ve witnessed on live TV since Marcia Clark had OJ try the gloves on.”

These are not serious people. https://t.co/w6kPiQtjaN

He ended up proving that the president was right.

If there were a fourth Corleone brother who was developmentally disabled, that would be Chris’s nickname instead

Hard to find a TV news clip that more perfectly encapsulates the problem with the media in 2019 than this from CNN today – from Chris Cuomo calling his mom and proving the exact opposite point he’s trying to make, to John Dean’s conspiracy theory, to everything in between. pic.twitter.com/CDtRYsiS6O

My quibble is with the headline. Shouldn’t there be a comma after the fourth word, himself, followed by either “again” or “as always”?

Any RATIONAL person would test a hypothesis in private BEFORE risking making a fool of himself on TV.

Not if you’re an arrogant prick with total (misplaced) confidence in yourself.
Fredo just keeps proving that he’s not the smartest brother in the family.

That’s a rather low bar.

Worse, anyone with half a brain cell would make sure the phone prop to be used is cranked up to be clearly audible. I’ve known a few people who’ve had phones like that. It wouldn’t be that hard to stage correctly.

well, it happened to that jewish guy with the mexican name something about a vault or something…one hour live tv special…so there’s that…

well, it happened to that jewish guy with the mexican sounding name something about a vault or something…one hour live tv special…so there’s that…

Chrissy Fredo does it again.
Proof that you don’t have to have any brains to be a CNN talking head… just need a “correct” last name.
Wouldn’t you think at some point they would put him out of his misery and have him covering cat shows or some other high value job like that?

What a great moment it will be when the President’s defenders in the Senate impeachment trial roll that clip during their closing argument, and argue to the assembled Senators:

OMG. Best comment of the day. I can’t stop laughing!
Please, can we repeat this over and over every time we hear an anti-President Trump propaganda piece?!!!

Can I get an amen?

Have a great day everyone.

Unreal…..Fredo still goes on to say that bash and him heard his mother…..BS their mics were no more than a foot from the phone

Let’s be fair to Marsha Clark. It wasn’t her stupidity. It was Darden’s.

I would be surprised if any modern phone maker would be happy to show that their phone calls can be overheard.

What’s the polling that they lose the house in 2020?

The polling will show rhem.keeping the House. The election, as shown in 2016, will be another matter entirely. I’m not a betting man, but I’d bet the GOP takes the House back in a romp.

Time for Cuomo to get triggered again…Fredo is his new permanent name.

The best moment was when his mother said:

“I know it was you, Fredo! You broke my heart.”