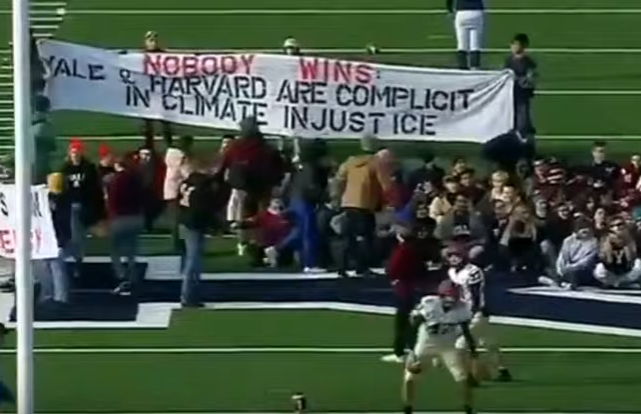 It would be hard to imagine climate change hijinks more hilarious than the protest at Saturday’s Harvard vs Yale football game.

Both institutions are deep blue and filled with virtue-signalling administrators and professors. However, according to green justice warriors, both universities are “complicit in climate injustice.”

“Harvard and Yale claim their goal is to create student leaders who can strive toward a more ‘just, fair, and promising world’ by ‘improving the world today and for future generations.’ Yet by continuing to invest in industries that mislead the public, smear academics, and deny reality, Harvard and Yale are complicit in tearing down that future,” the student groups, Fossil Fuel Divest Harvard, Fossil Free Yale and Yale Endowment Justice Coalition, said in a statement following the protest.

“We demand that our universities take responsibility for their role in perpetuating the climate crisis and global climate injustice — we call on Harvard and Yale to fully disclose, divest, and reinvest their holdings in the fossil fuel industry, putting an end to business as usual and taking meaningful action towards building a more just and stable future,” the groups added.

About 150 protesters delayed the game for 48 minutes.

Harvard led 15-3 at halftime. The delayed might have woken up the offenses. Yale (9-1, 6-1) rallied to win 50-43 in double-overtime and clinched a share of the Ivy League title with Dartmouth. Harvard and Yale play every year in one of college football’s most storied rivalries.

Perhaps the best moment came when some of the protesters were arrested.

After about an hour, police formed a line and moved forward, from the Yale sideline toward the Harvard sideline. A protest leader encouraged all ‘internationals’ to leave. An agreement was reached to escort the remainders off, with one police officer to every two protesters.

Those who did not leave then were informed by Higgins that they would be arrested. Asked how many people were taken into custody, Higgins referred questions to the police public information officer. Messages left with Yale and New Haven police were not immediately returned.

Between 20 and 30 protesters were arrested, according to organizers of the event. Rachel Sadoff, a junior at Harvard, said about 150 students from the two universities planned to participate in the protest. She said about 100 more students who had been sitting in the stands joined in.

‘Our goal was to spread the word,’ Sadoff said. ‘If more people speak up, our colleges will have to listen.’

She said those arrested were released and given a court date.

Despite the social media support from other climate crisis believers, many were put off by stupid eco-tricks.

Well they just lost thousands of potential supporters there.

It’s neither @minakimes. It’s the fact that the Yale Bowl was half empty for the Harvard game, and a bunch of smart, privileged kids who don’t care about sports or football, disrupt sports and football for a cause many of them will stop caring about after they are on Wall Street.

I thought Yale and Harvard kids where intelligent. These people come across as indoctrinated sheep.

exactly how I thought a game between Harvard & Yale would go. https://t.co/uqHidkHrmo

Also yale and harvard students: “tuition is too high!”

Who knew Harvard and Yale finally have useful idiot teams?

notamemberofanyorganizedpolicital in reply to TheFineReport.com. | November 25, 2019 at 10:57 am

They are majoring in “Dung Beetle.”

Ever see the movie “Harvard Beats Yale 29-29“? It’s the story of their 1968 football game and it’s really quite good.

So selfish and immature. Really 300 useful idiots needing attention inconvenienced thousands and then were arrested. I’m thinking couple hours locked in stocks near a public place would be fitting punishment. Along with a healthy fine. When their parents have to pony up…maybe pajama boys will have to behave.

Am I the only one putting together the “do not hire” list?

Because having a college education is looking like a non-starter.

The game should have been called on account of snowflakes.

How low do you have to score, again, on the SAT/GRE?

notamemberofanyorganizedpolicital in reply to Arminius. | November 24, 2019 at 4:50 pm

I, seriously, had a fire axe scoring higher than this.

You want me to post a picture of it?

Back when I was a younger man, I took the ASVAB. I finished about 10 minutes early. I wasn’t told my score, but I was told I had answered all the questions, and gotten only one wrong. And this post is the only result.

Just let the game proceed, if they are in the way it’s their own fault.

Here’s an idea, since these folks also probably believe there shouldn’t be any billionaires, let’s confiscate, I mean tax, all these schools with massive endowments.

According to US News and World Report, Harvard’s endowment is over $39B and Yale’s is over $29B. Just think of all the student loans that could be written off with all that evil wealth. Or we could buy every DREAMER a pony, I mean an emotional support animal. Your choice.

What makes me laugh about this is every one of these schools have kids who drive BMW’s, Mercedes Benz, Range Rovers, in huge numbers. These are fine cars, but they aren’t exactly known for fuel efficiency. And many aren’t even cars but SUVs.
These kids will work at high paying jobs that their parents hand them and they will ruin those companies through their “woke” addled fantasy that being climate experts is far more important than the bottom line.

Exactly … more hypocritical bullshit like Al Gore flying a private jet to some eco conference. How did the Hah-vahd students travel from Cambridge to New Haven? Did they pedal their bicycles?

LOL. I wish they would try that at an SEC game. The hospital would run out of bandages.

You win the internet today^

Such a pretty sign. I wonder if there is any “fossil fuel” material in it (e.g., ink, coloring, fabric) or if any non-renewable energy was used to manufacture the sign (e.g., energy to make the machines, run the machines, design the sign) or to make breakfast for these jerks or transport them to the stadium or…

The protesters were probably from Princeton.

I would give them a little respect if they really used their brains to demand an action that would actually benefit the environment immediately. For example, they could demand that a major investment be made into ending storm and farm runoff which is a major polluter of our waters; or an investment into upgrading every pollution plant to the highest levels. But no, they are bunch of morons demanding something that will happen naturally with future innovation. I have absolutely no respect for these children who are nothing but chicken littles.

Apparently our “brightest and best” as defined by the elites are full stop idiots….note to hiring managers…hire a community college kid over any ivy league grad if you want common sense, decent work ethic and some intelligence and critical thinking ability as these features are woefully absent in ivy league students from all evidence I’ve seen.

But they are in leadership positions.

First of all, I want to thank all of you. I was in a pretty dark place last week. When my dog, Romeo, died. But as I told my mom the 14 plus years he shared with me was a gift.

Still, losing him was hard.

The Yalies et al are what your future leaders when your sons and daughters go into combat.

What you need, not to brag, are people officers like me. I would waste my time pretending. I spent years at Camp Casey (2nd ID, Second to None). Even now, at my advanced age, I would throw down and …

If they were really serious about their concerns, they would major in science/engineering and try to find alternative energy sources, more clean energy, etc.
As it is, they are nothing but empty bells. Sad when a supposed bright mind goes to waste.

Field fence should be sturdy enough to electrify and be used to crowd the “herd of ignorance” into a manageable collection processing system.

Hehe, you made me laugh! “whiney foot stomping fit” too funny.

I first read it as whiney-foot, stomping fit but you probably intended whiney, foot-stomping fit.

adjective
having a drawn-out, high-pitched, unpleasant sound.
“he speaks in a whiny, childish voice”
having a complaining tone.
“without wanting to sound whiny, it’s quite hard work”

What a bunch of self-centered losers.

Activists storm a football is a first order forcing of catastrophic anthropogenic climate change. Technically, it’s more weather, a significant divergence in the local atmosphere, that lasted through the game, and perhaps lingered for several hours, a day at most.

The biggest joke since the MIT hack!