“The ‘remove you from your livelihood’ part of the culture we’re in now scares me.” 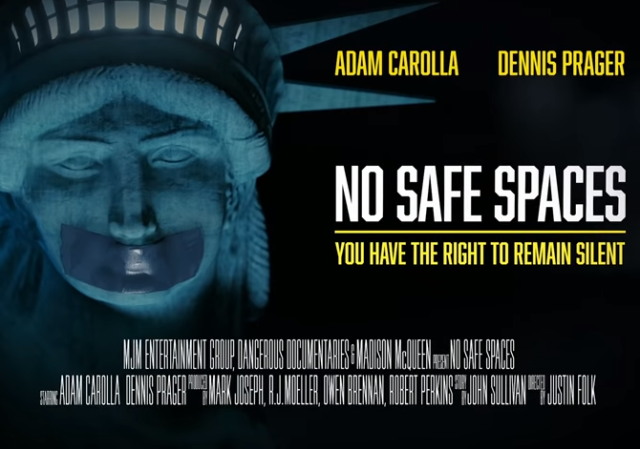 In light of all the campus speech shut-downs in recent days, I’m inclined to agree.

He’s known for his comedic chops and his super-popular podcast, but Adam Carolla says his new documentary isn’t about laughs, but making audiences think about what he describes as censorship on college campuses.

“No Safe Spaces,” which recently opened in theaters, exposes “the attack on free speech and free thought” against conservative speakers at universities across the country, according to its promotional material. Carolla says he and conservative radio host Dennis Prager have been working on the documentary for more than two years.

“I see where we’re heading as a culture, and it’s the sort of ‘cancel culture’ kind of thing, a lot of people being removed from their jobs or having to step down, or you know, everyone has to apologize for everything otherwise they’re going to lose their job,” Carolla says. “The ‘remove you from your livelihood’ part of the culture we’re in now scares me.”

The film is poised to premiere in Washington on Wednesday, with a Q&A featuring Prager at the AMC Uptown Theater.

“Not being able to speak on college campuses, all that does is hurt the students who protest against the ideas that they think they don’t want to hear but need to hear,” Carolla says.

Hopefully there’ll be a link to that sometime. Couldn’t Google the whole doc.