Zaid in 2017: “#coup has started. First of many steps. #rebellion. #impeachment will follow ultimately. #lawyers “ 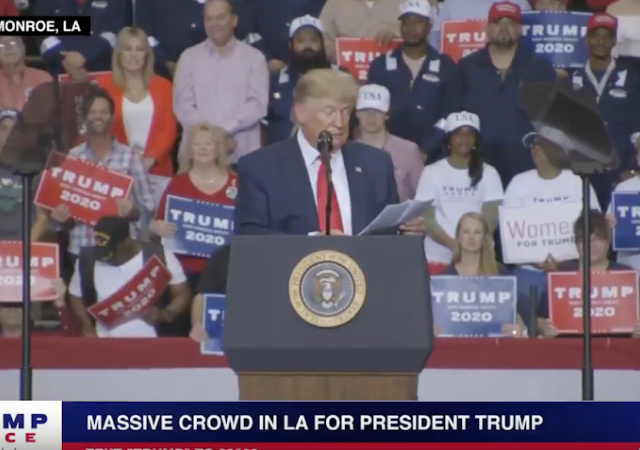 President Donald Trump read aloud some old tweets by Mark Zaid, a lawyer representing the whistleblower in the Ukrainian fiasco, at a rally in Louisiana.

These tweets from 2017 warned Trump of a coup in the near future.

Trump pulled out a printed version of the story from Fox News to read to the audience. From The Washington Examiner:

During his rally in Louisiana on Wednesday night, Trump bashed Zaid as a “sleazeball.”

“It’s all a hoax,” said Trump. “It’s a scam. And you know who helps them? These people right back here, the media.”

Trump pointed to Zaid’s tweet claiming that CNN could “play a key role” in his impeachment.

“Can you believe this?” Trump asked. “And this was done a long time ago!”

Trump reminded the people that The Washington Post published an article about a campaign to impeach him right after his inauguration. 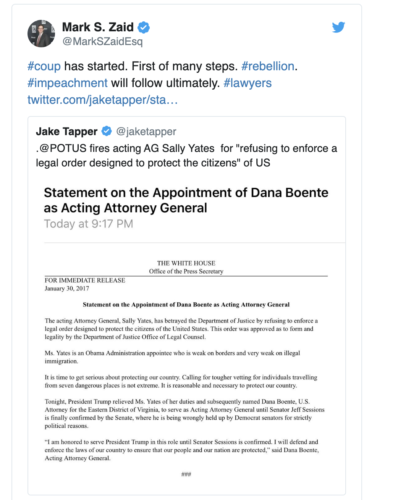 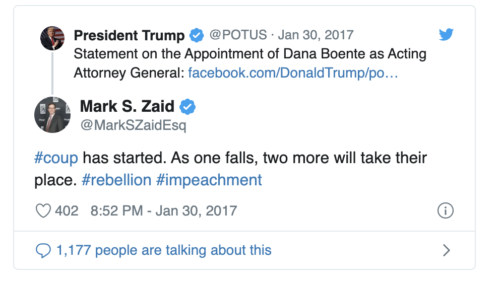 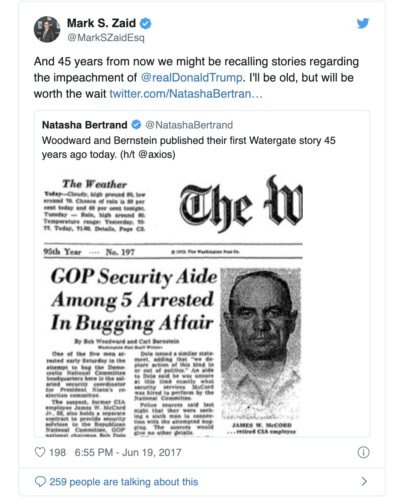 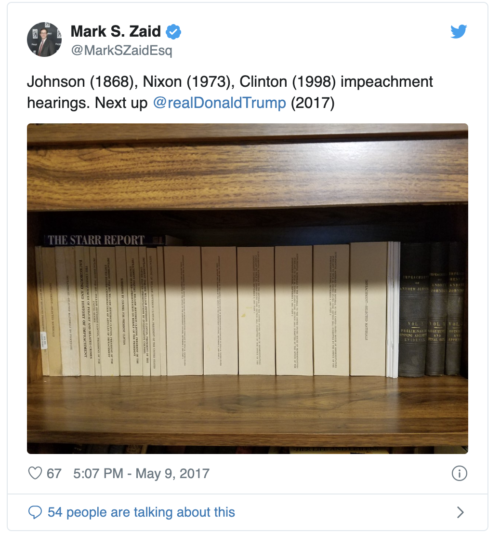 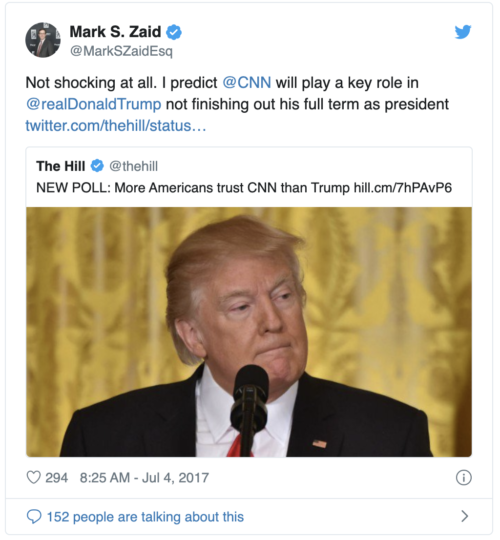 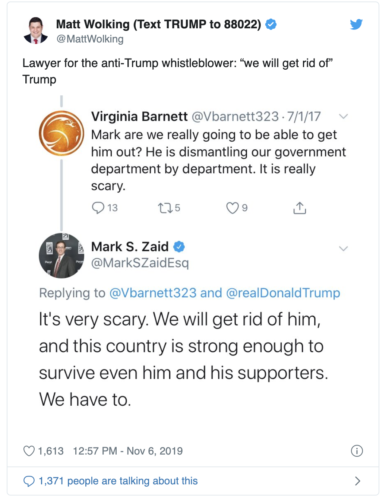 Another impeachable crime by Trump. This was “classified” information. Maybe not then but it is now after this Trump disclosure.

I’m so old, I can remember when the Dems were 100% sure ace lawyer Avenneti and Stormy Daniels were going to take down Trump.

notamemberofanyorganizedpolicital in reply to Andy. | November 7, 2019 at 4:58 pm

So was the Democrat Party owned MSM/Media.

‘We Are Not The Enemy Of The People,’ Say Press Who Intentionally Deceive The People To Protect The Political Elite

But don’t fret as the Democrat media (I repeat myself) machine will ensure this gets zero air time because remember…its illegal to name names now. Just like it was illegal to look at all them leaked Democrat emails…funny though how its NOT illegal to masterbate all over the stuff being leaked from Obama spies though.

He’s not likeable. He is an obstacle. Cancellation was the logical progression. #HateLovesAbortion

Excellent article including the embedded link to a 2006 article.

Mark Zaid, lawyer for Ciaramella tweeted on July, 2017…”The coup has started.”

This is a good, informative read.

18 U.S.C. § 2384 Sedition:… it is a crime for two or more people within the jurisdiction of the United States:

You might object that Ciarmella and Zaid and all the others didn’t use force but, let me remind you that fraud is a version of force.

I think that the use of governmental institutions for sedition is the use of force.

Force can be any action (including threats) to bring about an involuntary state in another person or persons. The use of force can be legal or illegal.

wonder how they keep their clearances, they cannot answer all the questions on the SF86 truthfully

Nice, but what is Barr doing, except his usual nothing?

About 12 years ago I had a phone conversation with this Zaid character pertaining to a case he was pushing against then Rep. John Murtha (who himself was a nogoodnik in his own right). Found Zaid to be a basic know-it-all, not at all receptive to any suggestions.

I believe the billboard trucks weren’t directly advertising for Zaid’s law firm. I doubt that would be legal. But Zaid co-founded something call “Whistleblower Aid” after Trump was elected. It looks like it provides financial incentives for turn-coats to come forward so these shysters can dress them up as whistleblowers.

“The GoFundMe is signed off by lawyers representing the whistleblower: Andrew Bakaj, Chuck McCullough, and Mark Zaid.

Zaid confirmed its veracity in a Wednesday tweet, writing that he can confirm that the effort is “completely legit,” and that the team “would appreciate any and all support US citizens can give.”

The whole thing struck me as real ambulance-chaser stuff.

You may find this article interesting.

““That [Mark] Zaid is involved in this case leads me to believe that the CIA whistleblower is either an idiot who has no idea what he’s gotten himself into or he’s been directed to make his ‘disclosure’.”— Former CIA officer and whistleblower John Kiriakou

‘The second thing that interests me is the officer’s hiring of Mark Zaid to represent him, rather than one of more than a dozen A-list national security attorneys at three or four major law firms in Washington.

Zaid is literally the worst possible choice for any whistleblower in national security.

… But while the FBI was looking at three different people as Risen’s possible source, Zaid sent a letter to the FBI saying, ‘I think my client is guilty.’

The FBI dropped the other two investigations and focused only on Sterling, who went to trial, consistently protested his innocence, was convicted, and spent three-and-a-half years in prison.’

… ‘Zaid briefly represented me in 2007, immediately after I blew the whistle.

But I fired him after two weeks because he was impulsive, unnecessarily confrontational and untrustworthy.'”

I’ve never met Zaid, but just what I know of his actions, those tweets, and now your comments, it confirms my long-distance assessment. And now just imagine how stupid Clapper, or Brennan, must be if they brought him into the #resist #coup fold.

BTW, Obama had the DoN name a ship after Murtha. His reputation as a POS proceeded him into the fleet. Sailors were already PO’d that they were given orders to the San Antonio-class Dock Landing Platforms (LPD), which were being sent underway, as the Navy admitted, in “unfinished” conditions. Tens of thousands of faulty welds, engines that tended to misalign, leaking pipes; these are the kind of problems you expect on 20 year old ships, not brand new ones. The fact that some of them were going to the Murtha was like putting salt on the wound.

Nobody calls the USS John P. Murtha by its full name. Instead they go with the nickname the Sailors gave it. The Fat Bastard.

Well so far Trump’s record on decimating lawyers who want to take him down is pretty good.

So, CNN is supposed to be media-central for the coup. Well CNN is fulfilling its role. Maybe we should call it: Coup Network News?

Merely confirms the widely held suspicion that Schiff, Warner, CNN, the DOJ/FBI crew were all part of a cabal to frame Trump.

Does this joker have an Epstein problem?

I wonder if U.S. Attorney Durham, who has apparently already convened a grand jury, will like to have a chat with Mr. Zaid. He was pretty sure of himself and his predictions. Particularly the role CNN was going to play.

It seems he may have been talking to a high ranking current or former member of the deep state.

“45 years from now we might be recalling stories regarding the impeachment of @realDonaldTrump.”

Perhaps he’ll even be out of prison by then.

Durham, as Barr, will never go after any deep staters

I said U.S. Attorney Durham in the first sentence.

What Obama-era intel/NatSec types did CNN hire as analysts, again?

Mark S. Zaid is such an amateur. I can say that as I was a Naval Intelligence Officer for 20 years. Sometimes ordinary people used to ask me about things (less so now since I retired in 2008). So I’d lean forward and whisper, “Can you keep a secret?”

And they’ll nod, with a look of anticipation on their faces.

“So can I,” I’d say, “leaning back in my chair and returning to my whiskey.”

“Obama’s former Director of National Intelligence James Clapper seemed to struggle with his poker face as he reacted to news of a DOJ criminal inquiry.

The current CNN contributor spoke with Anderson Cooper about reports of the transition of U.S. Attorney John Durham’s review into the origins of the Russia probe into a criminal investigation. And his body language spoke louder than his words…”

Maybe Clapper should have done the same. If I’m right about things and Clapper did bring Zaid in on the plan then he’s a rank amateur, too. If you WERE going to conspire to overthrow a President why the hell would you bring a guy like Zaid in on it. A guy who hired one of those billboard trucks to drive around D.C. advertising for anti-Trump “whistleblowers” (deep state “resisters,” really).

I could have the wrong target. I also hear Brennan has the tactical, strategic, and security instincts of an earthworm. That’s what Obama gets for hiring people for two qualities. Loyalty and mediocrity. Loyalty is fine, but the former narcissist-in-chief liked to surround himself with mediocrities because he always had to be the bride at every wedding, the corpse at every funeral.

There are two businesses you should never go into if you can’t keep your mouth shut. Intel and the Mafia. And never bring in anyone who can’t keep their mouth shut because they’re going to be the weak link in any organization.

Russiagate was the game plan. It failed miserably. Ukraine quid-pro-quo is the hail mary.

Mixing sports metaphors – I’m hopeful Trump and Co have been playing “rope-a-dope” with the Dems and all their damnable plots and traps … they’re gassed – and Trump still has lots of fight left to drop them for the count next November.

What concerns me is the seeming apathy of the Republicans in the House and Senate. The House Republicans should be demanding that the intelligence committee headed by Representative Schiff call particular individuals as witnesses. For example, Joe Biden and Hunter Biden should be subpoenaed to testify about their Ukrainian and Chinese corruption. And, witnesses should be subpoenaed to testify about President Trump’s efforts to get the Ukrainian government to investigate that corruption. There was legitimate fear that American funds sent to the Ukrainian government for armaments would be pilfered (maybe, diverted to Hunter Biden). Schiff may refuse the subpoenas, but that will evidence the partisan nature of the proceedings. Moreover, the Republican controlled Senate should commence hearings on this subject.