After backlash, WaPo changed it 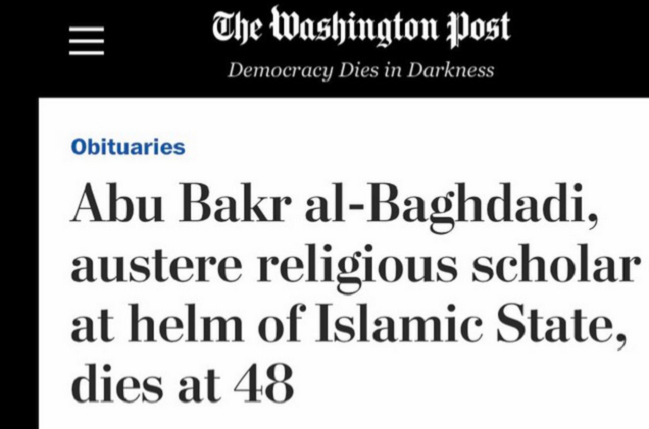 Then, for some unknown reason, the obit suddenly had the following jaw-dropping headline:  “Abu Bakr al-Baghdadi, austere religious scholar at helm of Islamic State, dies at 48.”

They had it right the first time.

The Washington Post changed the headline on its Al-Baghdadi obituary from “Islamic State’s terrorist-in-Chief” to “austere religious scholar at helm of Islamic State.” pic.twitter.com/cs243EVz7W

And WaPo again changed its headline.  It is (currently):  “”Abu Bakr al-Baghdadi, extremist leader of Islamic State, dies at 48.”

The “austere religious scholar at helm” of ISIS headline still appears in Memorandum: 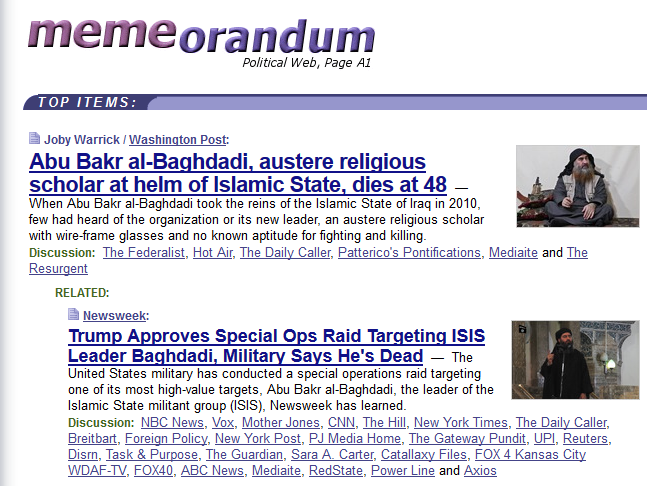 Mao Zedong, who saved 20-45 million of his own people from having to suffer through the struggle of existence, dies at 82.#WaPoDeathNotices pic.twitter.com/4wwJqQqXp3

Jeffrey Dahmer, amateur chef with a flair for exotic cuisine, dies at 34. #WaPoObits

Vlad the Impaler, inspiration for the Twilight Series, connoisseur of warm beverages and amateur landscaper, dies at 70. #WaPoObits #WaPoDeathNotices

The Washington Post….historically once a newspaper but in more recent years known as moving packing paper and birdcage liner after a long fight with unhinged leftism and blatent anti American activism finally succeeded in one of it’s many attempts to end any relevance it might have had.

WAPO never gets tired of being a sorry rag.

I do wish we could ship the writers of the WP to the arms of ISIS. They deserve it, along with some others.

Let’s be clear: The WP along with most of the other media is a true enemy. They support these killers.

What does Jeff Bezos have to say about this shit?

He agrees with every word. He is a crackpot. A Soros type.

The Trump-hating, Dhimmi-crat prostitute-lackeys of the MSM are becoming entirely too predictable.

Just before I saw this post, I thought to myself that the dhimmis will surely mourn the death of any prominent Muslim terrorist killed under Trump’s leadership by characterizing him as a “noted Islamic ‘scholar.’ “

I think both headlines are damning of al-Baghdadi. On the one hand, he was a murderer of innocents, a rapist and terrorist. On the other hand, he was an austere scholar of Islam. It was the Washington Post that did everyone a favor by connecting the dots.

Bezos should rot in hell for being so willfully stupid.

Then again, he is romantically involved with home-wrecking nut job lauren sanchez. It’ll be that nerds’ turn, shortly.

The Lord works in mysterious ways….

This afternoon at the gym, Fox News tagline was (paraphrasing) ‘report: al-bagdhadi killed in military strike’

They just can’t help themselves!

I know this is going to sound like big empty talk. But I insisted on driving through San Francisco with the tail gate down on the pick-up. After my bud and me killed a couple of pigs

I can explain part of it to you, but as on a recent thread on which I imposed my anniversary remembrance of the Battle of Leyte Gulf (you did set up your tree and hang the lights, right) I get accused of highjacking the thread. And rightfully so. You think your poltergeist is one som’b***h? Howzabout mine, which I lived with liberalism until I moved to Texas.

I have too much respect for the animals I hunt to make a display of them. But I was making a point. My meat doesn’t come wrapped in plastic.

The Chinese guys I dropped the pigs off with, to turn into Italian sausage, and the Mexicans at the muffler shop next door were in awe of the amount of pork I and my friend had killed. It was truly a multicultural moment.

And with one rifle shot I had discombobulated the leftist multi culti narrative.

Austere in the sense that he strictly adhered to the practices of lying, rape and pillage in the tradition of Islam. He not only wore stolen clothes and jewelry, but he personally tortured and raped young women, the most famous being Kayla Mueller, who was repeatedly physically humiliated in front of other captives, sexually abused and raped by Al Baghdadi himself, according to 2 former captives, one of which Kayla assisted in escaping. He never did break her spirit and she continued to attempt to convert captive women to Christianity and arrange for their escape until she was murdered.
Operation Kayla Mueller was America’s payback for this austere pig, so suddenly respected by the American media.

And here I was, thinking I was the only sane American who could grasp the essence of Islam. That I had to spell it out sl-o-o-o-wly. And then you come along and throw a cinder block through the glass window of the bull s***.

The original Al Baghdadi waged the wars of apostacy.

Past performance is not necessarily a decent prediction of the future. But in certain cases it can be a damn good bet. Pour encourager les autres.

The guy has a PhD in Islamic history. On the other hand I have democrRats who never heard of Islam until twenty years ago.

Yeah. Right. OK, fellow Texicans to make room at the wall for me? This time we’ll win.

Agreed. This time, no”13 days of glory.” We win, and live to tell our grandchildren about it.

Again, I know this is going to sound like big, empty talk. But right now the armed forces are recruiting boys who weren’t raised to become men.

The best officer I ever served with was the food services officer in Carl Vinson. We had a problem child, and without question he would turn that problem child around. the guy (it was invariably a guy) wouldn’t turn into Sailor Of The Month. But he would get turned around.

I just sat down, shut up, and learned from him.

The New York Times, once known as the newspaper of record, dead at the age of 168 due to complications arising from metastatic mendacity.

(Perhaps I don’t understand this game?!?)

1. Select notorious villain
2. Describe a couple well-known crimes… but spin them in the most flattering possible light
3. Confirm death of same (or other life-changing event).

We could use this to ridicule a wide range of looney leftists. Imagine the fun!

“spin them in the most flattering possible light”

Oh. So I did understand the game! 😀

Inadvertently they may have done a good thing by reminding his followers that allah has forsaken him.

I don’t know if I can hold up to this kind of pressure.My best friend from college, who was the best man at my wedding, is an excellenent shot on paper targets. On game not so much.
His wife Gina used to hate hunting and hunters. Then we turned pigs into Italian sausage. Then suddenly she became a fan. So much so she wants her daughter to become a huntress.

But I am not magic. I worked on my tracking skills for reason. i am pretty sure i can let the kid in on the secret I am not immortal. I don’t take a shot unless I am convinced I can make it. I am not perfect though. Now I have a child who is convinced I don’t miss.

If it is not clear, they have never witnessed me missing a shot. They think it’s easy. Holy Mother of All we Hold Holy, it took decades until I could put a rifle to my shoulder and get shot off within a second.