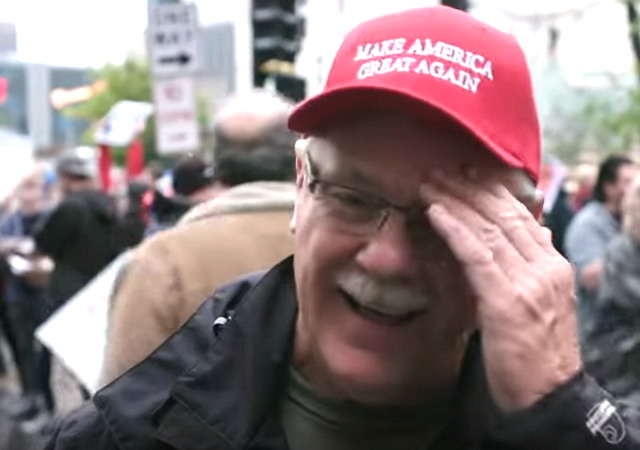 You may have seen the unhinged antics of left-wing Trump haters in Minneapolis after the Trump rally there this week, but this actually happened before the event. A man in a ‘Make America Great Again’ hat was being interviewed by a reporter for Vice when a random protester spit on his face.

Okay—we all know the Left hates Trump, but they may hate his supporters even more. The president’s rally in Minneapolis was dotted with left-wing thugs who harassed and assaulted Trump supporters because having a view that isn’t to the left of Lenin is intolerable to these clowns. We’re all Nazis in the eyes of these people.

They’ve become totally unhinged by the 2016 election and this incident last night toward one Trump supporter, who was being interviewed by Vice News, perfectly captures how extreme liberals have become: he was spat on.

The supporter, Dave Carlson, wasn’t angry. He took it in stride. The host was visibly shocked by the action. Another man is seen apologizing for the incident. Another individual, while not a supporter of the president, also came up to Carlson to say what happened to him was not appropriate, but added that his MAGA hat was also “disrespectful as f**k.”

Watch the video below, and note the shock on the reporter’s face when it happens:

That moment demonstrates quite a contrast in behavior, doesn’t it?

This is the perfect contrast between political left & right.

An leftist coward spit in this man’s face because of politics.

The man doesn’t retaliate, get mad or become a victim.
He wipes his brow & keeps defending our President.
pic.twitter.com/m7KAzzSeWz

Is anyone else surprised by the reporter’s shock in the video? Has she been paying attention for the last three years? Many Democrats and some of their allies in the media have encouraged this sort of thing and it’s certainly not the first time it has happened.

What do people expect to happen when Democratic presidential candidates go on national television and call Trump a criminal, traitor, fascist, Nazi, illegitimate president, who puts children in concentration camps with little to no push back from the media?

John Nolte of Breitbart News has compiled a list of 639 acts of violence and harassment against Trump supporters, which stopped updating in November of last year.

This man in Minneapolis handled the situation perfectly but sooner or later, someone is not going to respond in a very different way.

Vote Democrat so the thugs can rule. It is a simple message.

That act in many places is now listed as assault with intent.

notamemberofanyorganizedpolicital in reply to 2smartforlibs. | October 12, 2019 at 11:22 am

The Communist-Democrat Party Leftists were never so nasty and upset before President Trump and WINNING!!!!!!!!!

We are Winning Folks!

“Is anyone else surprised by the reporter’s shock in the video? Has she been paying attention for the last three years? ”

No. I’m not surprised by her shock.

She also has not been paying attention for the last three years. That I believe 100%.

A lot of people in this country really do not pay as much attention to the actions of the left as they should. The actions of leftists like this the person who spit are usually suppressed by the media. You don’t see it unless you go to those “other sites” like Legal Insurrection. And those sites are bad in leftist orthodoxy so she probably never visits here or even knows it exists. 😉

So large parts of this country don’t get a chance to see just how violent the left can be towards those the left doesn’t like. They live in a fantasy land that only the right is violent.

Cowards and Hypocrites….A testimony to the left’s moral high road they embrace by always taking the low road and then playing victim as seen here in “that was wrong, put your worse” as justification and for which only proves the point of the fools they are.

The police chief wanted a huge security fee for this rally, claiming that the Trump events were violent… so much more violent than most that his fee was some 20-times that usually set for such events. Yes, the rallies sometimes become violent but not due to the attendees; it is from the rabid leftist protesters. And the police coddle them. Sickening.

I’m a city boy who married a proper country girl (lucky me!) – so when I first met her farmer friends and extended my delicate guitar-player hand in greeting, several of them about tore my arm off with their rough sand-paper like hands, vice like grip and firm shake. I’m large and thought myself strong until I met those guys. That good ‘ol Minnesota boy looks to be cut from that same cloth. Had he decided to (ahem) respond to the pajama boy spitter, there’d have been little left but a splat mark.

If any protestor does that to me, he’ll spend a week in the hospital. Guaranteed. Take that to the bank.

Because of Trump, the ‘great reveal’ continues. The Left never looks good on camera.

The Khmer Rouge’s and Mao’s young murderers started out spitting, too.

[email protected] and her lover Tim Mynett were part of the violent Antifa mobs outside @realDonaldTrump’s Minnesota rally. Both covering their faces. See below video too.

The proper response to the spitter is to break his nose and teeth.