“was set to be the keynote speaker for Georgetown’s 16th annual Immigration, Law, and Policy Conference” 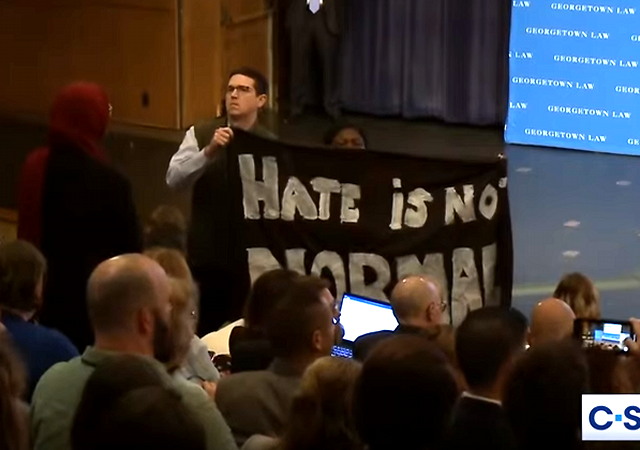 There’s a very simple way to stop this from happening. Schools should expel students who do it.

Protesters shut down a speech by the Acting Secretary of Homeland Security at Georgetown University Monday morning during an event meant to address U.S. immigration policy.

Acting Homeland Security Secretary Kevin McAleenan was set to be the keynote speaker for Georgetown’s 16th annual Immigration, Law, and Policy Conference, but was quickly shouted off stage by protesters, as reported by National Review. The event was advertised as an “excellent opportunity to go beyond the headlines with thoughtful analysis from leading experts” organized by the Georgetown University Law Center, the Catholic Legal Immigration Network, Inc., and the Migration Policy Institute.

McAleenan reportedly eventually left the stage after trying several times to begin to speak, only to be shouted down by protesters, some of whom can be seen on video, standing in front of the stage, facing the audience and shouting messages like “stand up fight back,” while holding signs that read “STAND WITH IMMIGRANTS” and “Hate is not NORMAL.”

That’s funny. The guy in the front is holding a banner that says, “Hate is not normal.” How do we protest this alleged hate? With screams of hate.

Which is utterly normal.

People physically preventing the freedoms of speech and assembly need to pay a physical price, imposed by the audience on the spot, if the organizers fail to maintain order.

Sign guy, of course, has the obligatory, self-important jackass expression on his punchable face.