When will the DC elite understand regular Americans view Trump in a different light? 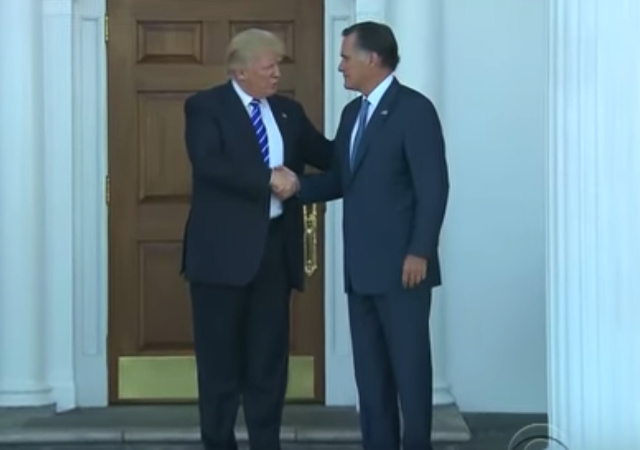 Sen. Mitt Romney (R-UT) has become one of the loudest voices against President Donald Trump.

During town halls in Utah, Romney has asked voters if he’s too tough on Trump. About half of them say yes.

Romney told USA TODAY that during a series of town halls in heavily Republican Utah, he asked constituents for their own views on his criticisms of Trump over Ukraine, Syria and other matters.

“How many of you in the room think I’m being too tough on the president?” he asked as about half of those in the audience raised their hands. “And how many think I’m not being tough enough?” leading the other half to do so.

Romney said he didn’t conduct the impromptu poll because he was having second thoughts about voicing his opinions, but, instead, to show constituents that they can respectfully disagree with one another.

“People tend to associate with people of like mind, and they assume everyone thinks the way they do,” he said. “And so, our town hall meetings have been quite civil.”

Trump won the state 45% to Clinton’s 27.2%. She only won Salt Lake and Summit counties.

But there is more to this. NBC News wrote that Romney’s harsh criticisms of Trump has not inspired his colleagues to join him, which has caused some to wonder if he has other motives:

Rather, it has renewed speculation among GOP critics in Washington and in Utah that Romney has ulterior motives — jealousy, retribution, Oval Office ambition or some potent mix of all three. After all, Romney ran for president twice and lost before Trump won the job, and then Trump made him publicly audition for secretary of state before passing him over.

And there’s reason for speculation that Romney might still have designs on a job his father ran for more than half a century ago. Even as he has angered Republican senators in Washington and activists at home, he is one of the few in the GOP with the national name-ID and fundraising prowess to mount a serious campaign for the presidency on an abbreviated timeline.

Romney’s attitude has won him admirers in the media who once took every opportunity to bash him in 2012 during his presidential run.

It’s a little different with Democratic lawmakers. They view him “as ineffectual because he has stopped short of calling for Trump’s impeachment and removal from office.”

I doubt Romney’s comments on Trump will harm his chances at re-election, but it is an eye-opener to how everyday Americans view Trump.

Yet, he has that office as long as he wants it.

wouldn’t bet the farm on that, most Utah residents only know him as the savior of the 2010 Olympic games the have zero experience of his politics, if his reelect were to occur in 2020 he would not be reelected. He has not reason to feel anything against Trump, he would have been president in 2011 if he did not take a dive.

I call him “The Submarine Candidate”.

Amazing that Romney harbors greater ill will toward Trump for a few tough words than toward fellow Mormon Harry Reid for his devastating statements about Romney’s tax returns.

Romney was taking one for the team with Reid.

Blinking red light for Romney here. A typical town hall attendee is there because they want to listen to the speaker, much like a rally. Any pol who shows up at a town hall and says some variant of “Do you like what I’m doing?” should get an overwhelming positive response. To have *half* the attendees not like what you’re doing is a good indication that perhaps you’re not doing what your constituents want…?

He’s trying to be McCain so the press will love him.

Exactly this. People generally don’t go to so-called town hall meetings with politicians for the entertainment value and most do not go to complain to the pol. So there was a great degree of self selection going on with this “poll” and a 50-50 mix (if we can believe the MSM or Mitten’s team on the result) is, as you say, more likely a gross defeat in the real world.

Most politicians really don’t give a damn about how their constituents feel – it’s their big doners that are driving the cart. Politicians figure that peoples’ memories are so short that a few catchy campaign ads will make them forget all the previous crap.

If Fauxahuntas was holding a town hall would any of you go? Most of us would not go. This means that the people in Utah who went to see Romney already like him to some degree yet half of those who like him disagreed with him. Since he was talking to people who favor him, imagine how many more that don’t like him would have raised their hands on that same question. I am not sure he can get re-elected or that he wants to be.

If Fauxahuntas was holding a town hall would any of you go?

I’d go in full Native American regalia … of course, they’d probably block the entrance to me. Hopefully some cameras would be there to record it.

Not only is romney a simple rat, but he’s actively working for the left as its ultimate useful idiot.

Fewer people in politics are as cloddish as romney. (He lost reelection in Mass. after one term, and he lost a shoe-in election to obama/candy crowley.

As Newt Gingrich said, romney is a dinosaur of the old GOP. At least Newt acknowledges the corruption of the ‘old’ GOP.

If you’re a Utah voter and you didn’t see this coming what di you see? Mitt believes he’s a kingmaker and Trump did need a kingmaker so little Mitt got his feelings hurt. It that wasn’t obvious you need to rethink your ability to cast an informed vote.

What a fallacy … what Romney has to say about Trump affects all 50 states, not just Utah. So Mitt, you wanna show a spine? Hold town halls in Texas, Wyoming – you know – reliable red fly-over states – where people ain’t gonna be nice and polite on account of being devoutly Mormon.

This restores my faith in Mormons.

Not mine. When you have Romney and Reid as examples of leaders of their church and communities, there is a serious issue going on with them. Neither are honorable men, and like it or not, they represent their faith when they do highly unethical things.
Romney has turned out to be showing himself as a very small and petty man.

Not mine. I had a Mormon neighbor. His understanding of property rights was, at best, cloudy.

I’m Catholic. We all have something to be ashamed of, don’t we?

What is with politicians and delusions of grandeur? Romney has run for president twice and lost both times. He has less chance than Hillary of attaining the Oval Office. People are sick of politics as usual, and he is on the poster.

It was like, “Oh, you’re Mormon. Let me partner in a business relation with you.”

And along came Reid and Romney.

I count an M too many.

During town halls in Utah, Romney has asked voters if he’s too tough on Trump.

That’s what’s technically called a “bullshit question.” Romney’s not being tough, he’s being annoying. Not Socrates-annoying, but more like ants-at-a-picnic annoying.

Ok, Mormons. I will forget about Reid and Romney if you forget about the inquisition. And the child molesting priests.

Jews, shut up. You have Don Rickles.

Utah voters: you made up your mind 12 months ago. You now have 5 more years minimum to live your your poor choices. The rest of us also have to live with them.

Too stupid to ask Candy Crowley for the transcript of the Obama-Benghazi disaster which would prove him right. But knows all about the things Trump has done wrong.

Romney’s like that one little dog in every neighborhood that all the other dogs hate.

Pierre Delecto…he’s all yours! I’m glad he’s no longer in Massachsetts.

Too bad he didn’t take the rest of the politicians of your state with him, but then you would lose too much population.

When will the DC elite understand regular Americans view Trump in a different light?

About the times pitchforks and rope become popular again.