The secretary-general needs to answer a lot of questions before whining about a lack of money. 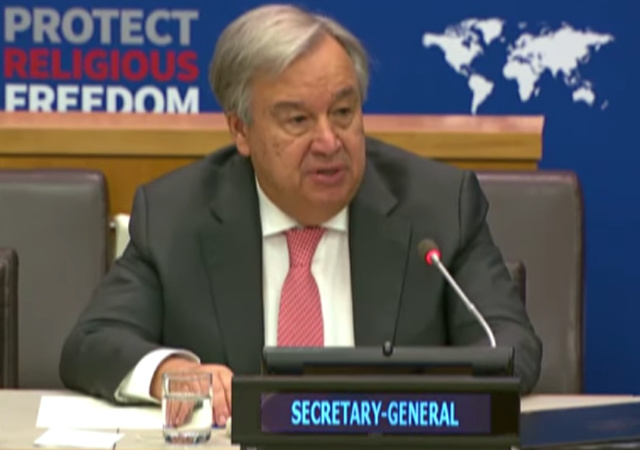 United Nations Secretary-General Antonio Guterres warned UN employees the entity could run out of money by the end of the month.

CBS News reported Guterres wrote in a letter that they may have to postpone “conferences and meetings and reducing services.” They may have to restrict “official travel to only essential activities and taking measures to save energy.”

Guterres said member states of the UN have paid “70 percent of the total amount needed” to meet the 2019 budget. Therefore the UN has a shortage of $230 million. From The Washington Examiner:

Out of the 193 member states, 129 have paid their annual dues. U.N. spokesman Stéphane Dujarric said at a briefing in New York that the member states who haven’t paid need to do so “urgently and in full.”

“This is the only way to avoid a default that could risk disrupting operations globally,” he said.

The total U.N. operating budget is about $5.4 billion. The United States shoulders the largest burden of that, contributing about 22%.

This is not the first time the UN has begged for money. Back in March, Michael Rubin wrote in an op-ed at The Washington Examiner that Guterres should first answer questions.

In the 1990s, the UN gave the late Kofi Annan the position of peacekeeping operations. They completely ignored the fact that “his craveness directly contributed to the 1994 genocide in Rawanda.” Then Annan became secretary-general!

The UN had the Oil-for-Food scandal in Iraq in the early 2000s. The UN ultimately fired the man who tried to blow the whistle on the scandal. He tried to tell them that Saddam Hussein “infiltrated and manipulated the $65 billion” program with help from the UN staff. This included the head of the program Benon Sevan, who allegedly took bribes to help friends secure oil deals. Overall, the program helped Hussein sidestep sanctions and bring in billions of dollars.

Also, why does the UN allow countries who obviously do not respect basic human rights to sit on important panels? Iran joined a UN group specifically to fight for female equality. A female cannot enjoy the outside in Iran without wearing a scarf. Iran just recently allowed females into soccer stadiums to watch games. But even then they sit away from males.

We must not forget the UN peacekeepers accused of child sex abuse around the world.

So excuse me if I do not feel sorry for the United Nations.

notamemberofanyorganizedpolicital in reply to ghost dog. | October 10, 2019 at 4:32 pm

Good! Let it die on the vine!

They can’t be on the vine since they are actually on a big teat drinking blue milk.

I just think it is high time we weaned the mother suckers.

I say offer them this deal.

They give up that prime manhattan real estate they occupy and relocate to…well hell anywhere not in the US and we will give them enough money to GTFO.

Then let Trump redevelop the land, grab your favorite beverage and some popcorn and enjoy.

How many countries are not up to date in their contributions? Lots, I bet.

Tell the last one out to turn off the lights.

The UN began as an admirable idea. It has since degenerated into irrelevance, or worse, causing actual damages.

The UN began as an admirable idea.
No, it began as a dumb idea, supported only because of the progressive idea that a bunch of smart people with the right thoughts could stop human nature (violence, greed, lust) and make us all live Happily Ever After in world peace and love.

It was dumb not just because it was possible, but because it had already failed in the League of Nations. Yet another case of progressives saying “Well, that time it didn’t work because it wasn’t done properly! This time it’s sure to be different!”

It didn’t fail at some later point. The failure was baked into the cake right at the beginning.

It was dumb not just because it was impossible,
FIFM

For the same reason the rich pay more than the poor here. It goes by GDP, not numbers.

And, just like here, the people/entities who are paying the most are the primary targets of those who pay little or nothing but continue to demand more.

What percentage does China pay?

How about this – They turn off the lights, close the doors, and go home.

The effectiveness of the organization will be unchanged, but there will be less wasted money.

I disagree greatly. The effectiveness of the organization will decrease enormously. But, since they’re only efficient at graft, corruption, violent crime, and prostitution rings, the net effect will be positive.

What this really means is that the U.N. Thugocracy needs more bribes to keep them in the manner in which they have become accustomed. No more 6-star hotels, no more caviar and brie cheese dinner parties with other people who think they are important.

Close the building, return Turtle Bay to New York City and let the Thugs go beg on the streets.

See the advertisement on this site of the toilet flushing? That’s the UN.

they may have to postpone “conferences and meetings and reducing services.” They may have to restrict “official travel to only essential activities and taking measures to save energy.”

Unfortunately . . . that doesn’t sound like much of a disaster. It wouldn’t kill them to cut that stuff even if they’re rolling in money.

In other words, we’re a loooonnng way from getting rid of them.

Gee I missed the part where this doofus claimed that the USA had not paid its dues. And since we paid our dues, when this guy asks for more money, the appropriate reply is, “I already paid at the office.”

If he can’t manage his budget (or collect his dues from the bunch of third world yappers at Turtle Bay) t.s. We paid at the office and won’t bail him out.

Gee I missed the part where this doofus claimed that the USA had not paid its dues. And since we paid our dues

Really? When did that happen? Last I heard we were still way behind (which I think is a good thing, but it is a thing).

Our share of the UN budget should be netted against the parking tickets that are clogging up the NYC system. And I’m sure they aren’t paying any property taxes on that real estate. So I think we’re even.

Have they considered holding a yard sale?

notamemberofanyorganizedpolicital in reply to joscefi. | October 10, 2019 at 4:34 pm

I know what the U.N. will do instead of that Joe.

The U.N. will hold a “Slave Auction!”

Good, let them move over to the EU

Let them move to Tehran. The rent is cheaper.

They could drive to work!

the good news fairy has sent us a gift!
yay!

Can Israel throw them into Debtor Prison and sell all their SUVs?

Nice to know it takes running out of money to get the U.N. to restrict travel expenditure to ‘essential travel.’

How soon will a Steve Cohen or Adam Schiff submit a bill to rescue the UN? How many Republicans will vote yes?

Doze that UN building into the East River. Give them an hour to evacuate, we can be humanitarian here.

And the problem with them going broke would be precisely what?

The US out of the UN and the UN the hell out of the US.
So much for a early Regressive’s, Woodrow Effing Wilson’s League of Nations scheme.

The do such vital work that the UN bureaucrats should kick I bbn a few billion of their stolen loot. BWAAAAHAHAHA

Great news. Use what they have left to get the hell out of America. The building would make some nice condos.