“I will not negotiate a delay with the EU and neither does the law compel me to do so,” Johnson tells Parliament 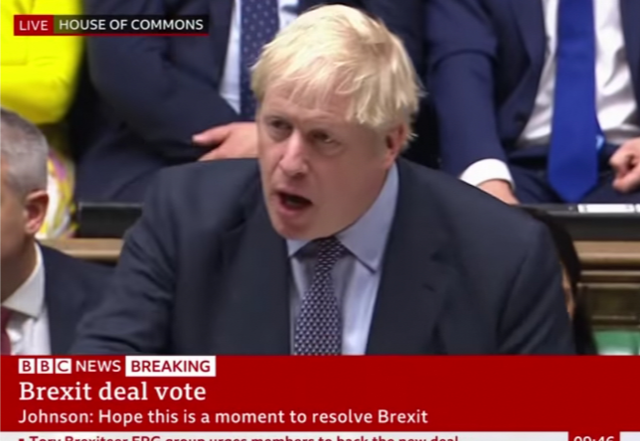 British Prime Minister Boris Johnson suffered a major setback on Saturday as the country’s parliament voted to delay the Brexit ahead of the October 31 deadline. Lawmakers voted by 322 to 306 in favor of an amendment that obliges the British government to request an extension from Brussels .

Prime Minister Johnson remained defiant in face of the vote, vowing to take the United Kingdom out of the European Union when the deadline expire on October 31. “I will not negotiate a delay with the EU and neither does the law compel me to do so,” Johnson told the House.

Following today’s vote, the government moved the vote on Prime Minister’s Brexit deal to Monday, rather than Saturday as planned. On Thursday, Johnson had announced the details of an agreement he reached with EU Commission President Jean-Claude Juncker ahead of a summit in Brussels.

MPs have voted to withhold approval for Boris Johnson’s Brexit deal in a spectacular setback to his plans to take the UK out of the European Union.

But the prime minister immediately told the House of Commons that he will not negotiate an extension of Brexit negotiations beyond his 31 October deadline, despite a law requiring him to do so.

His defiant message sparked warnings that he will face court action on Monday.

In dramatic scenes in the House of Commons, an amendment delaying a meaningful vote on the prime minister’s EU withdrawal deal was passed by a margin of 322 votes to 306, to deafening cheers from thousands of second referendum supporters at the Together for the Final Say rally outside in Parliament Square. (…)

The vote means Mr Johnson cannot secure parliamentary approval his deal by the end of 19 October and is required by the terms of the so-called Benn Act to write to Brussels to ask for an extension to the end of January 2020.

UK opposition Labour leader Jeremy Corbyn used the parliament’s proceedings to call for a second referendum on the country’s membership in the EU. “Voting for a deal today won’t end Brexit. It won’t deliver certainty and the people should have the final say,” Corbyn told the Lower House.

Corbyn’s sentiments were echoed by the pro-EU activists outside the parliament. Thousands of Remain supporters took to the streets of London on Saturday to demand a fresh EU referendum. EU supporters, backed by the mainstream media, have been calling for a second vote ever since they lost the referendum three years ago.

Following today’s vote, chief Brexit campaigner Nigel Farage called for the parliament to be dismissed and country to hold a new election. “A Remain Parliament and a Leave country and it’s just the most awful situation. I feel in the absence of a general election, nothing is going to improve.” Farage said on a radio show.

‘I will not negotiate delay with EU’: Johnson tells lawmakers

Today’s vote, however, comes with a silver lining. If the deadlock between the Prime Minister and lawmakers continues, the UK will effectively leave the EU on October 31 without a deal. Many Brexit supporters, including Farage, have welcomed the prospect of a no-deal Brexit. A no-deal Brexit is “the only acceptable deal,” Farage has repeatedly said. Earlier this month, Johnson assured that the UK government was ‘ready’ for a no-deal Brexit on October 31, if the negotiations with Brussels were to fail.

Londoners, like our DC and California, want the rest of the nation to shut up and do as they are told!

And, in California it’s the Bay Area and the Los Angeles Basin telling them rest of the state to shut up and do as they are told.

notamemberofanyorganizedpolicital in reply to Tiki. | October 19, 2019 at 4:38 pm

Who needs enemies when we’ve got those….

A film about the people who had long been forgotten, but now cannot be ignored — from the Rust Belt to the Essex coast. Featuring: Salena Zito, Matthew Goodwin, Glenn Loury, Munira Mirza, Paul Embery, Brian Denny and more.

“It’s all about the economics.

Without money to finance their ideology, everything stops.”

I guess a ready supply of duty-free German cars, and the Airbus contracts mean more than sovereignty.

Seems to me The Queen said October 31.

notamemberofanyorganizedpolicital in reply to gospace. | October 19, 2019 at 4:39 pm

Maybe the Queen needs to start practicing one of King Henry the 8th’s favorite phrases: “Off with their Heads!”

“… the people should have the final say,” Corbyn told the Lower House.

17.4M had their final say 3-years ago. Corbyn is a pompous ass … emphasis on pompous, and emphasis on ass!

I suspect the Remoaners have calculated that while they might win a “majority rules” re-do referendum, they would almost certainly lose district-by-district general election. Hence the insistence on a re-do and an avoid-at-all-cost attitude towards a general election.

Across the nation. Across the pond. An anti-native progression. Deja vu.

How long can a game of ‘kick the can’ go on?

Looks like a couple of weeks. At which point there may well not be even a pretense of consent of the governed left in Britain.

Another referendum until you peasants vote correctly? Britain may be approaching ‘lampposts and ropes’ time.

notamemberofanyorganizedpolicital in reply to Whitewall. | October 19, 2019 at 4:46 pm

The peasants are revolting.

Edward in reply to notamemberofanyorganizedpolicital. | October 19, 2019 at 5:12 pm

Yes, but they don’t mean in the “revolution” type of basis for the word.

notamemberofanyorganizedpolicital in reply to Edward. | October 19, 2019 at 5:23 pm

Yes, in the cartoon the “King” is using the word revolting in the other sense of the word.

DaveGinOly in reply to notamemberofanyorganizedpolicital. | October 20, 2019 at 1:38 pm

As in “The peasants are deplorable.”

Yes, vote over and over again until the EU gets the results that it desires. The EU has pulled such shenanigans before and along with traitors such as Corbyn are trying to do it again with the Brexit issue.

Seems like Parliament has forgotten who they work for. Perhaps an instructional revolution would be in order to reacquaint members of Parliament who they actually work for. Just saying

notamemberofanyorganizedpolicital in reply to Lucifer Morningstar. | October 19, 2019 at 5:24 pm

See this 30 minute video on this subject.

A film about the people who had long been forgotten, but now cannot be ignored — from the Rust Belt to the Essex coast. Featuring: Salena Zito, Matthew Goodwin, Glenn Loury, Munira Mirza, Paul Embery, Brian Denny and more.

RodFC in reply to notamemberofanyorganizedpolicital. | October 19, 2019 at 9:59 pm

The channel that is on., the spiked channel holds a regular podcast worth listening to.

BBC world news was at it again last night claiming that there was a new and overwhelming wave of voters demanding a fresh Brexit vote – and to pad that claim they interviewed a horde of anti-democracy “experts.”

We’re on the cusp of it – both in the UK and US. Will the self appointed neo-aristocracts succeed in yoking us like so many medieval serfs?

I would hope that there would be a violent reaction to that sort of thing in the US, though I’m sure there are many citizens who would just go along to get along. The UK – not so sure there would be much, if any, active opposition (beyond mild demonstrations and speechifying – they have laid down for so much thus far).

It has been a bit over 350 years since the last English Civil War over the prerogatives of Parliament [which really did involve all of Britain]. Sounds like it is time for another one. I am telling acquaintances I like in Britain who are dual US/UK nationals to have a path home ready for them and theirs.

Doesn’t sound like all that big a deal. Parliament even at its best is just an arena for fakeouts, bluffs, and posturing, all buried under speeches carefully crafted to be mellifluous but forgettable.

It looks to me like Brexit is right on schedule.

I’m oddly reminded of Sara Hoyt’s Vampire Musketeer novels (http://a.co/aMxkoZX) what with the propensity of people to become Judas goats, the sticky corruption they leave in their wake, and the sheer superhuman efforts ordinary people must go through to even slow then down.

They caught me at a different time, and I didn’t get to into them, but I’ll be toad if this whole EU/Brexit thing doesn’t just so remind me of them.

The real issue is that Great Britain is the second largest contributor to the EU and should GB leave, then the EU becomes essentially bankrupt. Additionally, without GB, exports from Germany to GB dry up pushing Germany into a deep recession which could easily turn into the dreaded and feared black swan. These actions taken in GB are nothing more than sycophants of the EU attempting to force the EU’s will on to the unwilling English in an attempt to reserve a dysfunctional union that is going to fail sometime soon anyway. Instead of income inequality it is power inequality where the people demand one thing and those in power are refusing to listen to and do the bidding of those who elected them.As with the Democrats in America, the arrogance of those in power is overwhelming.

It seems to me that they have Boris right where he wants to be.

“Oh please Brer Fox, whatever you do, please don’t throw me into the briar patch.”