“This victory paves the way for college students who may have been too fearful or intimidated to express their opinions to finally embrace their free speech rights and engage in true academic discourse.” 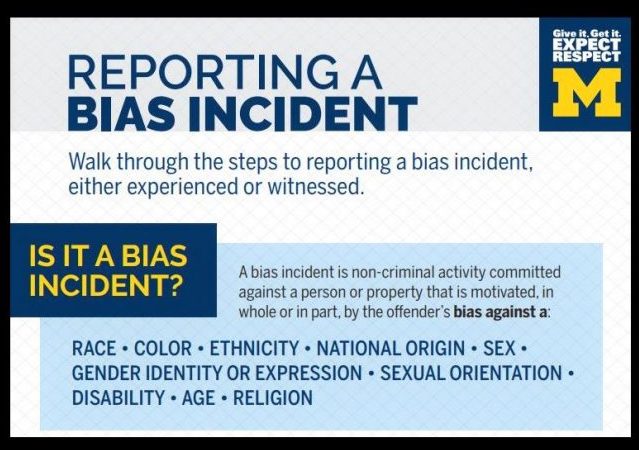 A group called Speech First has been engaged in a legal battle with the University of Michigan for months. Speech First went after the school over their speech codes and use of a so-called bias response team.

Now it appears they have reached a settlement.

In May of 2018, Professor Jacobson wrote:

If you have not heard of Bias Response Teams, then you haven’t been around campus in the last decade.

These teams, often referred to at BRTs, are the equivalent of SWAT teams standing by to enforce campus speech and conduct codes. All of the problems we have documented with campus sexual assault kangaroo courts apply equally to BRTs – the teams enforce often vague standards highly dependent on how a complainant feels, there is an opaque process with little due process, and the results often track accepted campus political correctness rather than a search for the truth. Yet the punishments can cause lasting damage…

You can view U. Michigan’s bias reporting website here, and reporting form here. U. Michigan also has an infographic describing the process.

The Michigan Daily has details on how the standoff ended:

The University of Michigan and Speech First, an organization dedicated to promoting and upholding freedom of speech on college campuses, agreed to settle an ongoing lawsuit related to freedom of speech and the University’s Bias Response Team. The agreement to settle, which effectively dismissed the lawsuit, was reached between Oct. 24 and 25.

Since May 8, 2018, the University and Speech First have been engaged in a dispute over whether the University’s Bias Response Team stifled freedom of speech on campus and violated the First Amendment. The University created the Bias Response Team during the 2010-2011 academic year to investigate claims of racism, sexism and other forms of discrimination put forth anonymously by students, faculty and staff. Speech First declared the team unconstitutional.

According to the settlement agreement, the University replaced the Bias Response Team with Campus Climate Support beginning in the 2019-2020 school year with no plans to reinstate the Bias Response Team in the future. The CCS serves a similar purpose, but does not reach out to the subjects of the anonymous reports directly.

Nicole Neily, the president of Speech First, released this statement:

The settlement gives us the relief we initially requested: the University agrees to never return to the unconstitutional definitions of “bullying” and “harassing,” and to never return to the Bias Response Team. In addition, we have reserved our rights to challenge the Campus Climate Support program in the future should the program ever be used to chill students’ speech. This victory paves the way for college students who may have been too fearful or intimidated to express their opinions to finally embrace their free speech rights and engage in true academic discourse.

You can read the full settlement agreement here.

Sadly, there is so much more work to be done to free up free speech. But, at least this is a solid step in the right direction.

So they’ll change the name of the BRT to something warm and fuzzy and continue as if the lawsuit never happened.

No. Read the article. “The CCS serves a similar purpose, but does not reach out to the subjects of the anonymous reports directly.” That is key. Without reaching out directly to the subject of an anonymous report, it cannot bully the subject or chill his speech. The subject need never even be aware that someone has complained of him to the CCS. And if it is ever used, somehow, to chill students’ speech the suit can resume.

Your faith is touching.

“For the rod of the wicked shall not rest upon the lot of the righteous; lest the righteous put forth their hands unto iniquity.”
Psalms 125:3