“edited music video Wednesday featuring a photograph of former Vice President Joe and his son, Hunter Biden, alongside an executive from a Ukrainian gas company” 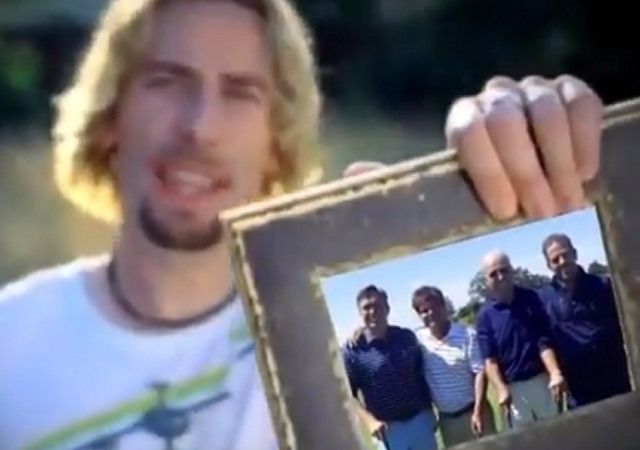 President Donald Trump’s Twitter feed drives the left insane, while many people on the right often find it entertaining. One thing is sure, whoever Trump has on his digital team deserves a raise for his recent Biden tweet.

The tweet includes a photo of Joe and Hunter Biden with a Ukrainian gas executive. The image has been spliced into a music video from the band Nickelback.

President Donald Trump tweeted out an edited music video Wednesday featuring a photograph of former Vice President Joe and his son, Hunter Biden, alongside an executive from a Ukrainian gas company.

The music video was from the song “Photograph” by the Canadian rock band “Nickelback.” Trumped tweeted out the video with the caption, “LOOK AT THIS PHOTOGRAPH!”

LOOK AT THIS PHOTOGRAPH! pic.twitter.com/QQYTqG4KTt

Trump tweeted that on Wednesday afternoon and by Wednesday night, the video had been viewed almost 8 million times.

The photo of the Bidens with the Ukraine executive was obtained by Tucker Carlson, who shared it on his show two nights ago.

Gregg Re reported at FOX News:

A photo obtained by Fox News’ “Tucker Carlson Tonight” shows former Vice President Joe Biden and his son Hunter golfing in the Hamptons with Devon Archer, who served on the board of the Ukrainian natural gas company Burisma Holdings with Hunter.

Earlier this month, Joe Biden told Fox News in Iowa that he never discussed his son’s foreign business dealings with him.

“I have never spoken to my son about his overseas business dealings,” Biden said, pointing the finger at President Trump. “I know Trump deserves to be investigated. He is violating every basic norm of a president. You should be asking him why is he on the phone with a foreign leader, trying to intimidate a foreign leader. You should be looking at Trump.”

Hunter Biden told The New Yorker previously that he and his father had spoken “just once” about Hunter Biden’s work in Ukraine.

A source close to Archer told Fox News the photo was taken in August 2014.

Every time a TV talking head says there’s nothing to this Biden story, Americans across the country laugh, and they should. As Peter Schweizer points out in the video, we all know how differently they would be treating this story if it was about Donald Trump Jr.

Well, that didn’t last long. Twitter disabled the video due to a copyright claim, presumably by Nickelback or the owner of the Nickelback song. But not until it had over 12 million views and almost 115,ooo retweets. It still plays (as of now) in the embedded version above. 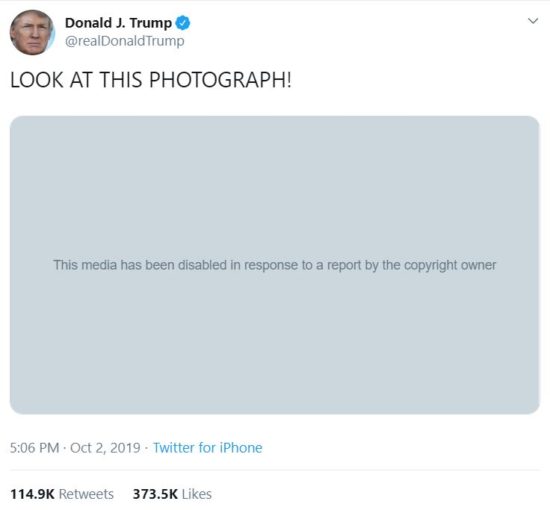 Here’s a photo sequence from the video: 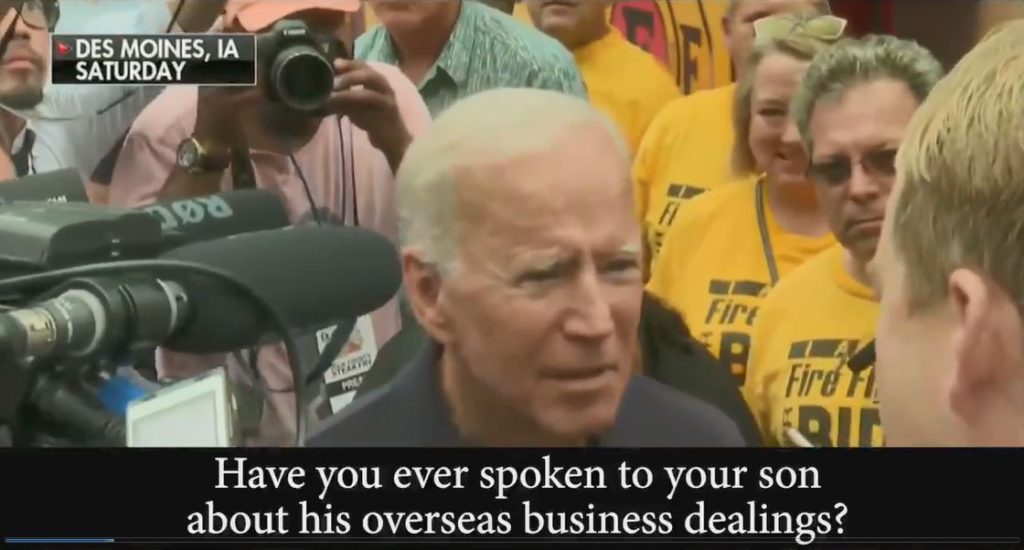 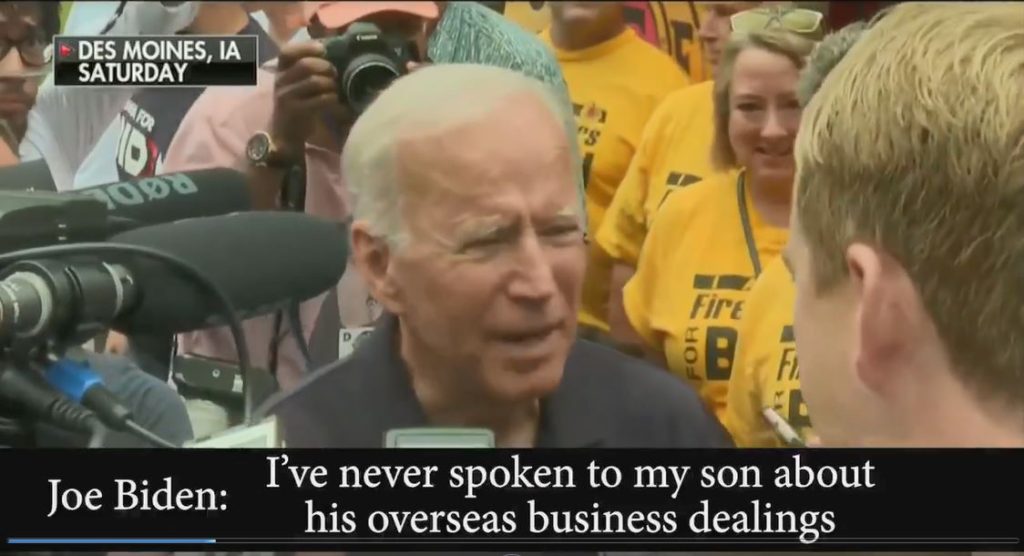 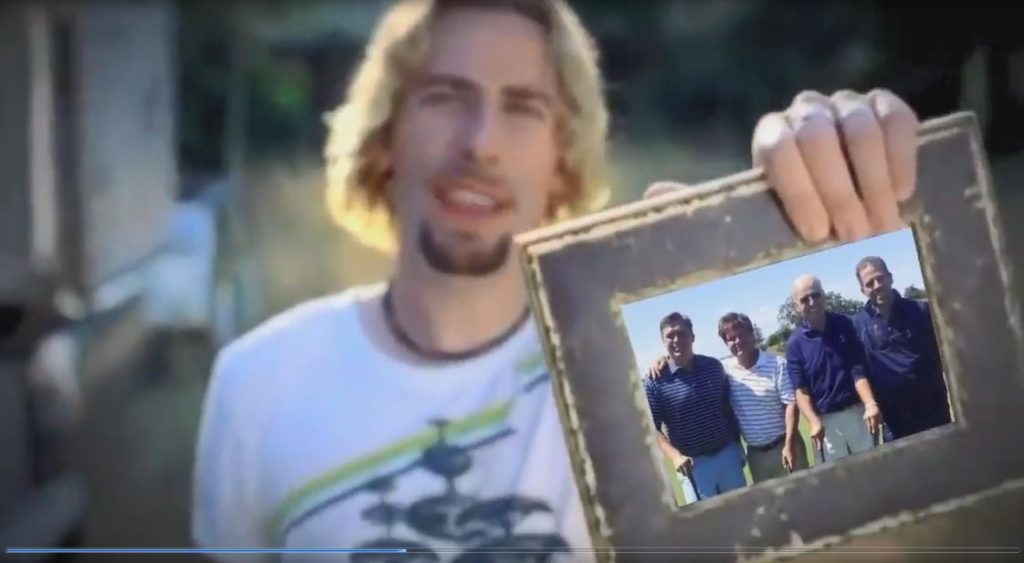 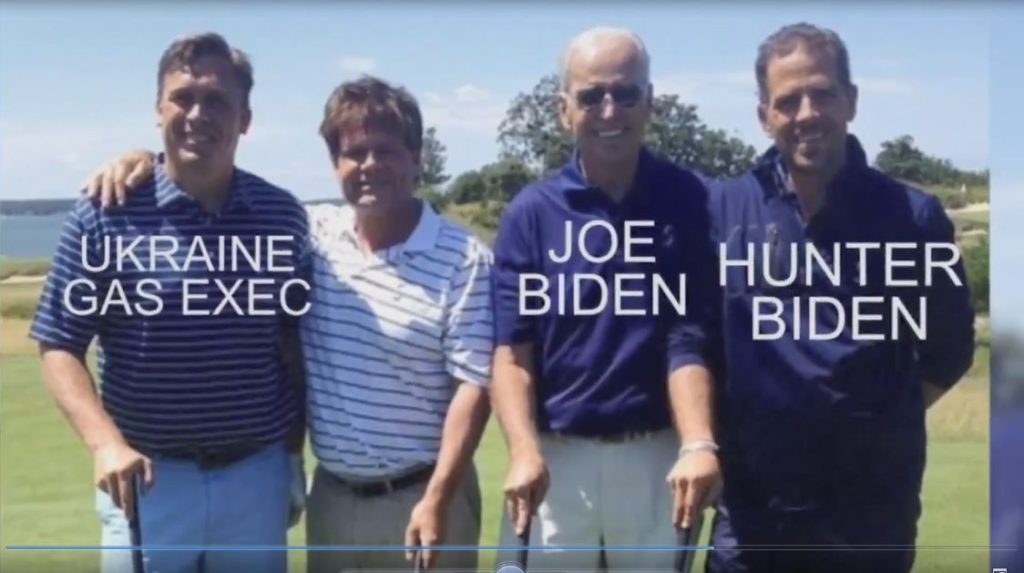 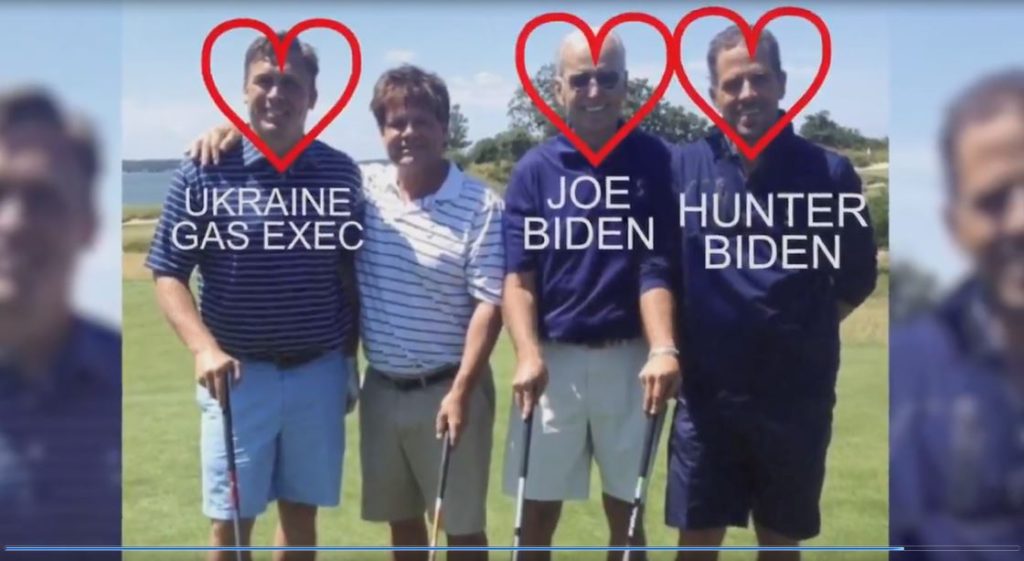 But like the Streisand Effect, the video is still spreading.

Left or right….Zulu gotta admit the President and his team are showmen.

Left or right, YOU gotta admit the President and his team are showmen!

I looked for the video on YouTube and it’s not there either. There must be fifty other Nickelback parody videos, but not that one. If Nickelback were claiming copyright infringement, you would think, all of those videos would be pulled, right?

Joe, you’re asking me to believe that nobody ever discusses business during a round of golf? Joe you’re getting to be the home of the whopper!

With extra pickles too. LOL

That’s just what the country needs right now. something lol at. This isnt sarcastic, ther rhetoric is off the charts.

He is violating every basic norm of a president.

Biden is not only truth challenged, he’s dumber than a brick.

notamemberofanyorganizedpolicital in reply to Barry. | October 3, 2019 at 2:13 pm

Biden is more corrupt than a brick also.

That’s funny. The “A-Team” had their video taken down for copyright infringement.

Imagine that. Turns out that Nickelback can determine how the art to which they own the copyright can be used. (Limitations apply!)

It is not clear who made the copyright report to Twitter. Warner Media Group owns the rights to Nickelback’s music.

seems warner may be the one saying where/when the bands music can be used.

The takedown law is really quick trigger. As in “take down at first demand and let the uploader fight about it later (and making it really difficult to reach anyone to argue your case is OK)
You could claim to be the automated takedown notice but of the Dewey Cheatem & Howe Law firm and have content taken down. And the uploader would fight to have likely legal content restored.
Warner might have the legal rights, but any number of persons might have sent a plausible takedown notice.

Relax Francis. The video cost almost nothing to produce, and got lots of hits before being taken down. And here we are talking about it. Good return on the tiny investment.

If you are on here blathering, it’s working.

Google is your friend. Search for “fair use doctrine” and learn something.

“The “A-Team” had their video taken down for copyright infringement.”

No commie, it was taken down because it was highly effective.

All you commies are corrupt lying murderers.

Perhaps Comrade Zach is lying, it is still up at 2:30pm

After a minimum of 12 MILLION people viewed it lol

And the video ends with the lyrics “and what the hell is on Joey’s head”. It’s a meaningless shot, I suppose, at Joe Biden, but I still find it funny. Humiliations galore.

Look up “Look at this Instagram” on youtube. It’s absolutely hilarious and mocks millenials to a T.

The lyrics of the song are perfect!

“Look at this photograph
Every time I do it makes me laugh
How did our eyes get so red?
And what the hell is on Joey’s head?”

Trolling to the max!

Biden is a chronic, compulsive and habitual LIAR. And he’s not to smart, either.