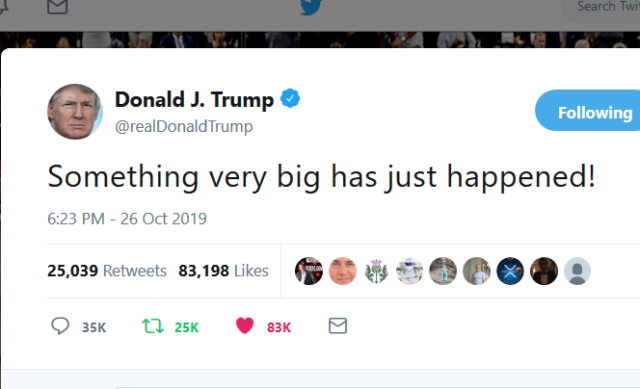 After a wild week of news, which ended with news that the Department of Justice is looking at bringing charges in its Russia-Collusion investigation, President Donald Trump may have made the weekend’s news cycle even more wild.

He tweeted that, “Something very big has just happened.”

Something very big has just happened!

Now, Trump being Trump, this could mean a wide range of events have occurred or deals have been made. Currently, speculation is centering on the idea that the big thing is that ISIS leader Abū Bakr al-Baghdadi has been captured or killed by US Special Forces.

We will continue to monitor the news, and update as confirmed information is available.

Trump will make a statement at 9 a.m.

.@hogangidley45: “The President of the United States will be making a major statement tomorrow morning at 9 o’clock from the White House. “

Readers can help by posting information in the comments.

The big announcement is: Trump had two schools of ice cream for dessert.

Democrats plan to subpoena the maker of the ice cream to testify in closed hearings about the links between ice cream and Russia. It’s cold in Russia, and ice cream is also cold. Only a Russian asset would deny such an obvious link.

A few leaks have come out, it seems that Abu Bakr al Baghdadi (high up ISIS leader) was the target of an operation, so likely the announcement is that they have killed/captured him.

If true, that’s the good news.

The bad news is that there’s plenty more where he came from.

Other outlets have posted it’s the end of the self-named al-Baghdadi.

Are you tired of all the winning? (SNL reference)

Can we call him al-blownupi?

The talking heads on the Never Trump Networks (NTN) spent all day Saturday claiming that Trump’s Syria policy is allowing ISIS to reconstitute. Oops!
The NTN news is 24 hours of “We Hate Trump”. After a short period watching I want to regurgitate because it is sickening.

No idea, but announcement of some indictments would be ideal.

Pence is stepping down and Hillary is replacing him, just to shut her up.

“keep your friends close, but your enemies closer” type of thing?

So I guess Abu Bakr won’t be making a speech at the Democrats’ national convention next year.

But he will still be voting for years to come in Chicago. And NYC. And Austin, TX. And numerous places in the People’s Democratic Republic of Kalifornia.

I’d like to see the video of Baghdadi getting some payback.

Thank you Delta Force, Rangers and the accumulated government elements who put the plan into action and the wonderfully successful outcome.