Trump dominates in digital, while Joe Biden twiddles his thumbs advertising on TV

Trump dominates in digital, while Joe Biden twiddles his thumbs advertising on TV

There’s a broader lesson there, one that needs to be applied to the education system — develop an alternative means of communicating with students, one that goes around biased institutions. 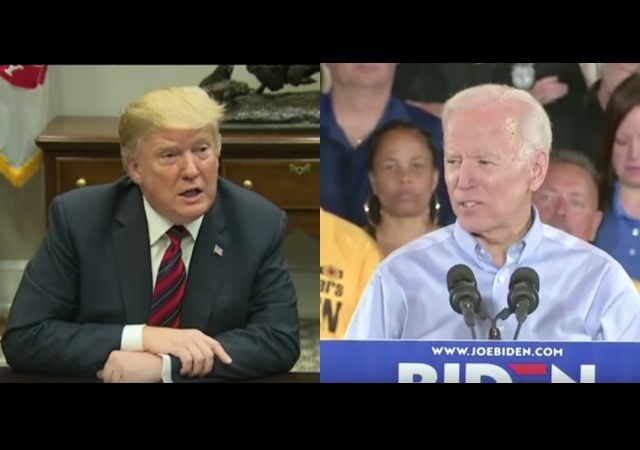 Brad Parscale, Trump’s 2016 digital director and 2020 campaign manager, boasted on Twitter that the Trump’s digital operation has a reach beyond the mainstream media:

We have revolutionized digital for the Republican Party and @realDonaldTrump. Record fundraising, record prospecting, record voter contact, and record reach. Even the #FakeNewsMedia can not match our reach. 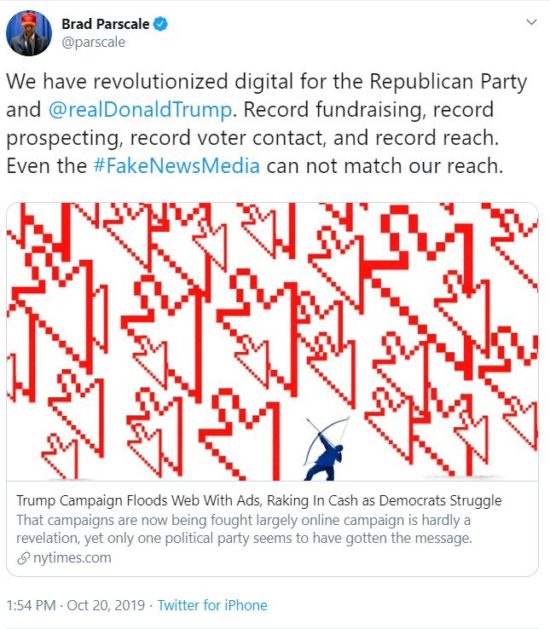 Parscale’s boast was tweeting a link to a NY Times article, Trump Campaign Floods Web With Ads, Raking In Cash as Democrats Struggle:

On any given day, the Trump campaign is plastering ads all over Facebook, YouTube and the millions of sites served by Google, hitting the kind of incendiary themes — immigrant invaders, the corrupt media — that play best on platforms where algorithms favor outrage and political campaigns are free to disregard facts.

Even seemingly ominous developments for Mr. Trump become fodder for his campaign. When news broke last month that congressional Democrats were opening an impeachment inquiry, the campaign responded with an advertising blitz aimed at firing up the president’s base….

The onslaught overwhelmed the limited Democratic response. Mr. Biden’s campaign put up the stiffest resistance: It demanded Facebook take down the ad, only to be rebuffed. It then proceeded with plans to slash its online advertising budget in favor of more television ads.

The article goes into great detail on Trump’s digital operation methodology, and it’s impressive. But let’s stop on that last line in the quote above: Biden’s campaign “slash[ed] its online advertising budget in favor of more television ads.”

Biden’s dinosaur-era response was emblematic, in the Times’ account, of the broader Democrat problem:

That campaigns are now being fought largely online is hardly a revelation, yet only one political party seems to have gotten the message. While the Trump campaign has put its digital operation firmly at the center of the president’s re-election effort, Democrats are struggling to internalize the lessons of the 2016 race and adapt to a political landscape shaped by social media….

The campaign under Mr. Parscale is focused on pushing its product — Mr. Trump — by churning out targeted ads, aggressively testing the content and collecting data to further refine its messages. It is selling hats, shirts and other gear, a strategy that yields yet more data, along with cash and, of course, walking campaign billboards….

The Biden campaign’s decision to tack from digital to television, they say, is only the most glaring example of a party hung up on the kind of broad-based advertising that played well in the television age but fares poorly on social media.

I don’t watch much TV anymore. Most of the news I get is from some form of the internet (keeping that information flowing is another topic, it’s getting tough). So I’m unlikely to see Biden TV ads. But I constantly see Trump ads on Facebook.

Getting around mainstream media bias is tough. I don’t think even the most aggressive Trump digital strategy can completely neutralize the in-kind contribution the media gives to Democrats, but it’s making a major dent.

There’s a broader lesson there, one that needs to be applied to the education system — develop an alternative means of communicating with students, one that goes around biased institutions.

This is a great idea.

Well, I don’t know . . . the ads I’m constantly bombarded with here on LI are for pre-ripped women’s pants on eBay (who knew that was even a thing?), novelty costumes for pets, and Democrats.

Pre-ripped women’s pants? I could buy a bunch of women’s pants at local Goodwill stores. How much do pants-rippers typically get paid?

They have to be installed on an actual woman so I know where to rip them.

They have been a fad for 10 years or more.

Honestly, I love LI, but the ad networks used by it SUCK. I don’t mind ads. I get it. Gotta monetize the site. But the LI ads are the worst. The site is slow as shit, crashes on my iPad, and half the time I get one of those ads that says you have a virus and offers to upgrade Flash for you. And I get an amazing amount of ads for women’s clothing.

Which begs the question Tom, whybare you looking at Demicrat cats wearing ripped tights as a costume?

don’t do social media–trump has harnessed the power of the web to deliver his message–like him or not, he has forsaken the legacy media and reached out to our people directly–he knows the majority of his messages will be edited/dubbed/scrubbed/deleted by the fake news conglomerates but he soldiers on to reach out to americans anyway–directly, without the spin/screws/scrubs of ” journalists “–he has revealed the traditional ” reporters ” for the shills/shallow twits they are and, in some notable instances, what outright lies they attempt to foist on the public–besides defeating hillary and gradually reshaping the judiciary, his efforts to expose the sheer hubris and gall of the media has been one of the greatest accomplishments of his first term–a true public service to our country–believe he will do a lot more in his second term as he continues to drain the swamp and maga

I’m oblivious. Until just now I didn’t realize LI had ads. I just don’t look at the right side of my screen.

Wait. I thought the liberal/progressive Dimocrat party was the party of science, and enlightenment. How can they let a bunch of Republicans they view as cave men who barely know how to read & write, kick their butts up and down the technology field?

Don’t tell me they have an exaggerated opinion of themselves!

Andrew Breitbart once stated, “politics is always downstream of the culture”. It seems that Mr. Trump has kept up with the culture. Other politicians…not so much.

In Biden’s mind people are still “clipping coupons in the stack market.”

Actually Grampa Hair Plugs McDenturesSpitter was wrong. It is an increasingly rare thing on the bond market, and it never existed in the stack market, for a borrower (government entity or corporation) to issue a paper bearer bond with coupons attached. Each coupon was for a semi-annual interest payment.

The nice thing was that the issuer of the bond didn’t keep any record of the purchaser. The purchaser’s name wasn’t on paper bearer bond nor on the coupons. Since the bond was unregistered anybody who provided the coupon to an agent of the issuer would receive the interest payment whether or not they were the actual owner. The issuer wouldn’t know who the owner was. Which meant that it invited fraudulent activity such as tax evasion; it would have been impossible for the issuer to report they income to the IRS as your bank does since the bond holder was anonymous.

It’s the perfect investment vehicle for someone like Biden who is real with-it hep cat, Corn Pop brawler, and beatnik poet at heart. You know, groovy.

Maybe the old-folks home can fix up a room that looks like the oval office like the insane asylum did for Hillary Clinton’s padded cell.