Trump Booed, Greeted With Chants of “Lock Him Up!” at World Series Game 5

Trump Booed, Greeted With Chants of “Lock Him Up!” at World Series Game 5

As if anyone needed another reason to hate DC… 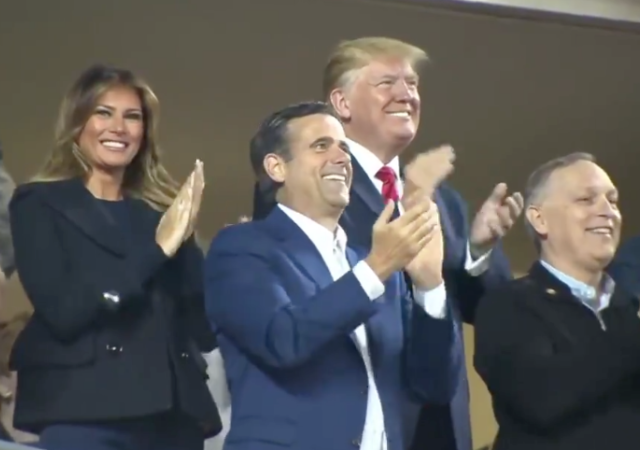 President Trump attended Game 5 of the World Series, held at the Washington Nationals’ ball park. When Trump was shown on the park’s big screen, locals booed and chanted “lock him up!”

Full on “LOCK HIM UP! LOCK HIM UP!” chants heard throughout the crowd at Nats Park after President Trump was announced and shown on screen here #WorldSeries pic.twitter.com/1ktVXkHYFy

President Trump was booed loudly by the fans at Nats Park when he was shown on the big screen.
Then came a loud chant: “Lock him up.” @wusa9 pic.twitter.com/LBbgSAHd6k

President Trump invited a dozen wounded warriors to sit with him at the World Series.

You can see the wounded warriors standing here with the President — as a stadium full of bloated, rich DC lobbyists & bureaucrats boo them all:

More from The Baltimore Sun:

President Donald Trump was met with loud, sustained boos and chants of “Lock him up!” from fans at Nationals Park when he was shown on the in-stadium video screen after the third inning of Game 5.

The boos ended only after the video screen cut to a shot of U.S. service members waving to the crowd and then showed a message thanking the military. Trump is attending the game with five wounded veterans.

Leave it to the DC crowd to politicize one of the most American, least political national sports in existence.

The Babylon Bee is savage:

The left just doesn’t get it. This kind of thing only makes President Donald J. Trump stronger. It motivates his supporters, and creates more support in the long run. Hate like this does not play well outside the big blue cities.

Everyone watching the game from home saw this.
Trump is a master troll.
He knew it would happen.

I heard cheers in there too. Very mixed crowd.

Lock him up for what? The right’s “Lock her up” chants were based in the fact that Hillary was guilty of numerous crimes–as outlined by Hillary butt-monkey James Comey, among others. She CAN (and should) be locked up. Trump committed what actual crime? That’s the problem for Dems: “Orange Bad Man” is not a criminal offense.

A potent reminder of how swampy the area is. They think themselves immune from the challenges the country can face.. the pain and economic hardship happens to others .. those away from Rome on the Potomac.

In some ways they are immune. Think of a major war scenario… if all major cities were hit the remainder of the country would be full of the very people Yamamoto warned about. Decapitate the top ten cities in the USA and the country left is hot Red, White and Blue. Cultivating a surrender of a dominate soft blue populace would make France’s capitulation in WW2 look downright patriotic.

DC is DC. They are the Swamp. Any Federal Indictments of the DOJ and FBI conspirators should be tried somewhere else. You cannot get an objective Jury in DC.

Tou know what? For a dictatorship this place seems awfully relaxed! ??

I Thought the WH announcement a few days prior was a mistake, it let the creatins prepare to be loud and obnoxious
I am sure many many were there explicitly to do their art performance. If you see the pic by home plate, some “vets” had a sign calling for his impeachment.

Dispute that it really pissed me off, the look of hurt on Melania’s face, it was disgusting

The Trump curse is alive and well. Go Astros! In 6.

TWANLOC, with all that implies for the future.

One more loss and the Nationals will be only the fourth team to lose a seven game World Series after winning the first two games. Go Astros!

He had to know the swamp would do something like this when he announced days before he’d be attending game 5. If there was anyone in the country who didn’t know about the Dems impeachment games, they do now after the booing, chants, IMPEACH TRUMP banners. All while surrounded by wounded Vets? At the very least it gets/keeps people engaged in the goings on.

I absolutely loathed President Obama, but I never would have embarrassed him or our country by booing him in public, in front on the world. These people are losers.

I ceased to be a Nats fan Sunday evening after seeing how the fans and the team owners treated the President. What a bunch of spoiled brats. The Astros should close out the series tonight.

I was at that game.
The boos for home plate umpire Lance Barksdale were waaaaay louder.

Let’s not forget that memorable day when Michelle Obama and Jill Biden were bood at a NASCAR event where they were grand marshals.