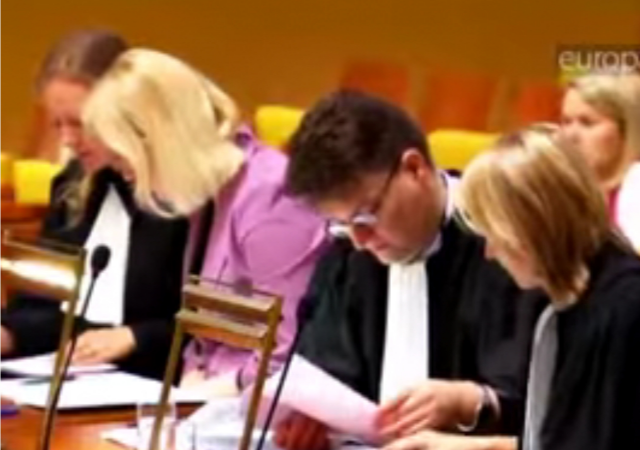 The European Union’s top court ruled on Thursday that its member states can order Facebook to remove ‘illegal’ or ‘defamatory’ posts and comments worldwide. Any content found objectionable by a national court belonging to the 28-member bloc can be deleted from the world’s largest social network, the European Court of Justice (ECJ) in Luxembourg said.

The measure will not be restricted to specific statements deemed undesirable by a European court but will also apply to similar content elsewhere on Facebook. The social media platform will be obliged to “remove identical and, in certain circumstances, equivalent comments previously declared to be illegal,” the ECJ said in a statement. “In addition, EU law does not preclude such an injunction from producing effects worldwide, within the framework of the relevant international law,” the court added.

The court’s judgement was in response to the case filed by Austria’s Green Party politician Eva Glawischnig-Piesczek, after she was called a ‘lousy traitor’ and a member of a ‘fascist party’ in response to her demands for welfare payments to asylum seekers, Austrian public broadcaster ORF reported. Glawischnig-Piesczek was offended by these and similar comments attacking her views on immigration and sought legal recourse after Facebook initially refused to delete them.

Facebook plans to appeal the court’s ruling. “This is something I expect us and other companies will be litigating.” company’s CEO Mark Zuckerberg said in response to the verdict.

Facebook can be ordered to police and remove illegal content worldwide, Europe’s top court said on Thursday, in a landmark ruling that rights activists say raises concerns some countries could use it to silence critics.

The judgment means social platforms can be forced to seek out hateful content deemed illegal by a national court in the 28-country bloc rather than wait for requests to remove posts as it currently does under EU rules.

Facebook and other platforms can also be made to comply with requests to take down content globally, even in countries where it is not illegal, the Luxembourg-based Court of Justice of the European Union (CJEU) ruled.

“EU law does not preclude a host provider like Facebook from being ordered to remove identical and, in certain circumstances, equivalent comments previously declared to be illegal,” the Court said in a statement.

“In addition, EU law does not preclude such an injunction from producing effects worldwide, within the framework of the relevant international law.”

“Ugly posts, tweets and comments manage to bypass judicial orders and find their way into the veins of digital communication,” Germany newspaper Süddeutsche Zeitung complained. “Now the European Court of Justice has ruled that the legal protection needs to be water tight, at least a bit.”

Facebook “makes it difficult for the affected persons to defend themselves against insults. The European Court of Justice has now strengthened the rights of the users,” German weekly Der Spiegel declared.

The ruling “extends the reach of the region’s internet-related laws beyond its own borders,” The New York Times noted.

Thursday’s ruling is part of the EU’s efforts to suppress dissent on social media, particularly criticism of its open border immigration policy. The new EU-wide legal framework will be based on the German online ‘anti-hate speech’ laws approved by Chancellor Angela Merkel’s government in two year ago. “EU officials have been mulling new bloc-wide rules, building on existing legislation in Germany, that could hit big tech firms with possible fines if they fail to remove illegal hate speech quickly enough,” Bloomberg confirmed.

According to Germany’s Network Enforcement Law, popularly known by its sinister sounding acronym NetzDG, social media platforms can be force to delete “potentially illegal content.” Facebook, Twitter, and Google can face fines up to €50 million, or $60 million, for failing to remove content within the prescribed time. Germany has launched hundreds of probes this year, targeting Facebook users for posting supposedly hateful comments about immigrants.

[email protected] in reply to notamemberofanyorganizedpolicital. | October 6, 2019 at 2:38 pm

man i hope zuck takes this personally. normally, these institutions attempt this on average people. zuck has the money to tie this up in court for a long time.
this is one reason the uk (and others) need out of the eu. the fewer member states, the less power they have.

Seems like we are going to end up with national social media platforms, or else we ate all going to be censored by the nation with the most restrictive laws

Clash of world views coming into sharper and sharper focus.

Under (A), rights are inalienable, inherent in each person by simply existing. Government is organized, with the consent of the governed, solely to protect those rights.

Under (B), rights such as speech, assembly, petition, are “granted” by government which exists unto itself regardless of the consent of the governed, acting as the final arbiter. Here, what government “gives” can as easily be taken away. Stated otherwise, UN/EU types of “rights” are conditional, always subject to being withdrawn.

The problem is the promotion of Islamic Terror, Terrorists and terror organizations such as UNWRA encouraging knife attacks against Jews, or Hamas glorifying Terror attacks. Facebook is promoting terror. https://israellawcenter.org/%D0%B1%D0%B5%D0%B7-%D1%80%D1%83%D0%B1%D1%80%D0%B8%D0%BA%D0%B8/the-facebook-file/

Of course they get to define “hateful”.

Who gets to make the call on what’s hateful? I says anything liberal is hate-filled.

notamemberofanyorganizedpolicital in reply to 2smartforlibs. | October 5, 2019 at 2:24 pm

i would think a citizen of malta (pop. < 500,000) could file a claim with the courts. they would not even be required to actually live in the eu. if the court upholds their claim…
zuck should pull access to any eu member state. and, by extension any eu citizen.

The EU’s definition of hate: anything it doesn’t agree with.

70 years ago several hundred thousand Americans sacrificed their lives defending Europe for this?

70 years ago, we helped to repel an invasion.
Today, they welcome invasion.

The dang Soviets were right – we should’ve split Germany into tiny bits and reduced the hun to an agrarian-only nation and peoples. Never again to be a threat to the world. But no, we allowed Krupp to rebuild their forges. Only the parent name changed.

And now we find ourselves faced with another aggressive Germany. A totalitarian, lawfare minded Germany. A Fourth Reich. Led by a shaky, mentally ill, East German nudist named Angela Merkel.

Just as before – the little central/eastern/Baltic European nations like Poland, Czecho-Slovakia, Hungary, Romania are laboring under the oppressive jackboot of the Kraut.

Destroying a distinctly separate culture is part and parcel of destroying a people. Culturally hostile immigrants supplant Wehrmacht/Waffen SS shock troops. The American Indians were destroyed by European culture in this manner. So why wouldn’t it work by flooding Hungary or Romania with hostile middle eastern settlers? I see no difference between the two.

And all of it in conjunction with, and enabled by, the American left – the Amerikadeutscher Bund of 2019. Maoist-Stalinist in nature and a variant of fascism. The labels don’t matter. We know what the result will be if they win.

But how to win? Normandy will happen in the courtroom, not on some remote beach on the shores of Europe.

Pray to whatever god you wish, but pray hard.

You really don’t need to worry about the Germans, within a generation there will be no one left there but the Muslims.

You are greatly mistaken in believing the Krauts won’t remain at the top of the power pyramid. They’ll change the rules at the drop of a hat and then shoot their serfs down if their power is challenged.

Kinda how the democrats change whistleblower forms to suit their needs. Or how they pervert the judicial branch to subvert constitutional law. I could go on, but you darn well know what I’m talking about.

There, I fixed it.

It’s okay to displace the aboriginal, indigenous Caucasian culture and peoples of Hungary, Slovakia, Czech, Poland, Britain and France with hostile settlers from the another land/continent?

It’s not okay to displace aboriginal/indigenous if those people are…?

Both Facebook and the EU need to go away, AFAIC.

I am confused. I hate both. At long as they keep eachother occupied, they can do less harm to the rest of us.

Each has more divisions than the Pope. They can multitask.

No wonder the Brits want out.

So will Facebook finally be required to delete the accounts of people like Louis Farrakhan and Al Sharpton? All they do is spew hate speech on that platform as well as Twitter. Would just love to see that happen. But know full well it never will. Because black.

Given the EU’s longarm statute, here in America we have ours: First and Second Amendment rights, which reach into Europe.

Abide by them zealously, or we’ll pull our troops out.

I’m not a lawyer…. I didn’t finish third grade either. But is this saying Germany can force FB to delete something written in Texas, not just to where Germans don’t read it, but even Texans don’t get to either?

My reply to the EU would be FO.

USG should instruct Facebook to ignore this decision in the US.

How can the US government order Facebook to not comply? Heck, how can the feds even enforce such an order?

Seems to me that if Facebook becomes even more censorious or non-leftist speech it will just make the service less competitive with alternative outlets.

Facebook is hardly the optimal choice of champion in the war against creeping totalitarianism.

Heck, no, they love this rule. It gives them cover to boot all the conservatives off its platform.

One example of the “hate speech” that the EU seeks to outlaw:

I used to read froggy years ago, had forgotten it.

Good excuse to get out of NATO. They wouldn’t be any worse off under Putin.

I think a better idea would be to remove the hateful content from the EU.

i’d suggest just removing the eu. which i think will happen after the uk pulls out.

News for the EU: You dont’ control the world.

Too bad one can’t use Proper names in scrabble.

America should get respond by declaring all German speech laws to themselves be hate speech and demand they be silenced and forbidden worldwide.

Once again the EU takes on the role of World Government, on the grounds that they consider themselves more moral than anyone else.

There is no good ending to this.

Generally, when the corrupt Germans begin telling the world what to do, a war follows, with them the losers. Should it ever happen again, lets make sure there is nothing that can ever again rise from the ashes and rubble once called Germany.

Pull all our troops now!

pull out us troops. normally, i’d be all for this. but, if a war is near i’d rather we already occupied much of europe with 100,000 troops. i’d imagine this would vastly shorten the conflict.