September 2000: How the fake “Israeli Policeman and Palestinian” image launched the pro-Israel blogosphere

September 2000: How the fake “Israeli Policeman and Palestinian” image launched the pro-Israel blogosphere

Tuvia Grossman was beaten bloody by an Arab mob, but was portrayed as a Palestinian, and the policeman protecting him was portrayed as the perpetrator. It gave rise to Honest Reporting website and other pro-Israel blogs fighting fake news. 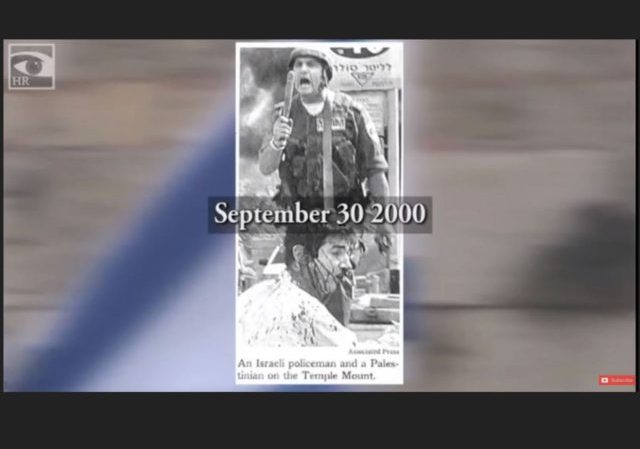 Currently, I am a professional blogger. (Blogging is part of my job description, though it is by no means my only task.)

Every once in a while I reflect on how I got here. I certainly didn’t start out in the field in the 1980s.

A tweet last week from the media monitoring organization HonestReporting, reminded me why I got into blogging back in 2003.

The organization launched 19 years ago in reaction to the publication of a news photo that falsely described a Jewish student as a Palestinian and suggested that he had been beaten by an Israeli policeman.

This week marks 19 years since Tuvia Grossman, the bloodied "Palestinian," appeared in the media, leading to the creation of HonestReporting.

On Sep 30, 2000, The @nytimes @AP and others published a photo of a bloodied young man seen below a club-wielding Israeli policeman. pic.twitter.com/2OgeR7AZqX

No, I didn’t start blogging in 2000, when the Yasser Arafat and Fatah launched the so-called Aqsa intifada, but the awful reporting of the violence and Israel’s response to it was one of the spurs

The photo that started it all, as the organization calls it, captures an Israel policeman, his face showing anger, holding a baton threateningly toward a bloodied young man. The New York Times and other media outlets captioned the photo, “An Israeli policeman and a Palestinian on the Temple Mount.”

The young man’s father reading the paper the next day, however, recognized him. He wasn’t a Palestinian, he was Tuvia Grossman, a young Jewish man from Chicago, who was pursuing religious studies at an Israeli Yeshiva (religious seminary) at the time.

(If you’re wondering if it’s a coincidence that in 2000, September 30, the day the picture was published was the first day of Rosh Hashanah, the same as this year: it isn’t. There are corrections built into the lunar Jewish calendar to make it coincide with the solar Gregorian calendar every 19 years.)

Dr. Aaron Grossman, later wrote a letter to the Times explaining what they got wrong, “Regarding your picture on page A5 of the Israeli soldier and the Palestinian on the Temple Mount — that Palestinian is actually my son, Tuvia Grossman, a Jewish student from Chicago. He, and two of his friends, were pulled from their taxicab while traveling in Jerusalem, by a mob of Palestinian Arabs, and were severely beaten and stabbed. That picture could not have been taken on the Temple Mount because there are no gas stations on the Temple Mount and certainly none with Hebrew lettering, like the one clearly seen behind the Israeli soldier attempting to protect my son from the mob.”

After an initial, inadequate response, the Times published a picture with the correct caption.

While it’s true, I didn’t start blogging until 2003, the creation of HonestReporting in 2000 was one of the impetuses that pushed me to start blogging in response to the poor treatment Israel received in the media.

(This wasn’t the only example of media malfeasance in the fall of 2000. Richard Landes and others have written about Mohammed al-Durah case. A father and son were caught in a shootout between the IDF and terrorists at the Netzarim junction in Gaza. A French news program caught the incident on camera and accused Israel of deliberately killing the son. There were many questions about the report and Israel did not always handle it well. Landes provided a chronology of that story at his blog The Augean Stables.)

Since the mid-90s, I had been producing and distributing a weekly sheet of news items mostly from Arutz Sheva (now Israel National News,) IMRA, an organization called Shomron News Service, and Israel’s Foreign Ministry that gave a perspective on Israel that was different from what was portrayed in the mainstream media, or even (unfortunately) in most of the American-Jewish press.

In addition, by 2000, I had a mailing list of subscribers to whom I’d send out the best pro-Israel articles I’d seen.

And then, of course, there were the early bloggers, especially Meryl Yourish and Israelycool. (I think I started a little before Elder of Ziyon.)

To be certain, HonestReporting wasn’t the first organization to fight anti-Israel media bias. CAMERA has been around since 1982.

Why did I get into blogging? It was a combination of factors. I loved writing, I wanted to defend Israel against the slander that often passed for news, and there was a world of information available through the internet that could be marshaled in defense of Israel.

What I understood was that the internet meant that the mainstream media no longer had a monopoly on information. And a blog gave you a platform, with which you could compete with the big boys  (though without their built-in megaphone). Of course, I overestimated the influence of blogs. I assumed once people started showing the media that they were wrong, they would be stricter about how they reported because they wished to maintain their credibility.

What I’ve seen since then is that the media has, if anything, gotten worse. Truth is less important than narrative. Journalists, for the most part, despite claiming to belong to a profession that seeks the truth, see themselves as the arbiters of what’s true, and do not care much for criticism.

While researching this post, I came across an interesting video.

In 2010, HonestReporting arranged a meeting between Tuvia Grossman and the soldier, Gidon Tzefadi who saved him. The video is embedded below. At the time the picture in the featured image appears, Tzefadi was saying of Israel’s response to dishonest reporting, “We never take the initiative, we’re always on the defensive.”

It was interesting to hear Tzefadi’s account of what happened. To him, it was surreal that a caption that identified him as beating a supposed Palestinian, when in fact he was saving the young man’s life.

have an easy fast.

we must protect each other and call out JINOs for what they really are – the killers of our nation – like SOROS aka tsures.

Lies are always used to promote something that the liar wishes to promote.

This should be the focus of any journalist(m). But again human nature interferes.

I would propose that all journalists submit a C.V. that is publicly available so as to give the public the means to judge just who is reporting and their potential leanings/bias.

This will be the way to clear away some of the weeds without weakening the 1st amendment or running afoul of the courts.

Part of the difficulty is that we all bought the lie that journalism is objective.

See, journalism used to be a not very respected job. Then someone decided to make it more “professional”. So they talked it up as a “profession” and they thought they would fight all the corruption and all be Clark Kent, saving the day.

The trouble is that’s not really objective. It takes a position on what’s right and wrong. And it aims for the right.

Well, it wasn’t a long trip from there to progressivism. So, they really haven’t changed much – it’s just their Highest Good is a bit more radical Che and a bit less Ma and Pa America than it used to be.

But, in the meantime they sold America on the “objective” and “professional” thing. (That was much easier to do because of TV, btw.) It’s always been baloney.

Thanks for all you do! Never stop

Gosh you guys are awfully hard on the Palestinians. They are always nice to me. In fact, even though I am pro-Israel, my Palestinian acquaintance is always offering to take me to Sbarro’s for a pizza.

A good post, but no mention of “Paliwood”? How long has that name been around? I know at least since the mid-aughts.

remember this photo when it was first published–THIS guy is a warrior–THIS is how to handle antifa–” you punks want to hurt innocent people? I’VE got something for you! ”

kudos to this man