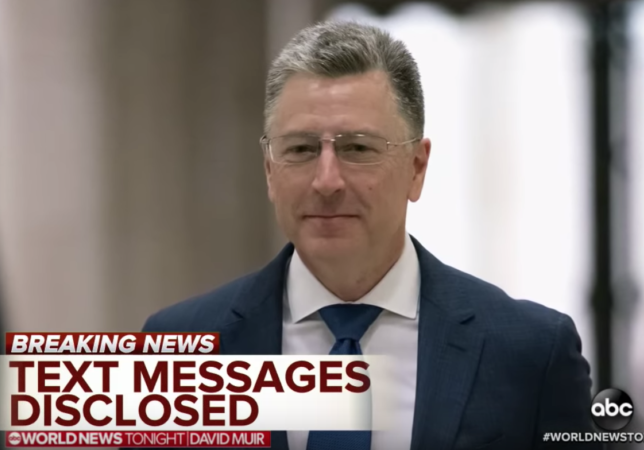 Congressional testimony from the former top American envoy to Ukraine directly contradicts the impeachment narrative offered by congressional Democrats and their media allies. Ambassador Kurt Volker, who served for two years as the top U.S. diplomatic envoy to Ukraine, testified on Thursday that he was never aware of and never took part in any effort to push the Ukrainian government to investigate former Vice President Joe Biden or his son Hunter. He also stressed that the interactions between Giuliani and Ukrainian officials were facilitated not to find dirt on Biden, but to assuage concerns that the incoming Ukrainian government would not be able to get a handle on corruption within the country.

Volker’s full remarks, which were obtained by The Federalist, can be read here.

“As you will see from the extensive text messages I am providing, which convey a sense of real-time dialogue with several different actors, Vice President Biden was never a topic of discussion” during negotiations with Ukraine, Volker testified. Cherry-picked snippets of those texts were released by the office of Rep. Adam Schiff, D-Calif., late Thursday evening.

“[A]t no time was I aware of or took part in an effort to urge Ukraine to investigate former Vice President Biden,” Volker told lawmakers.

Volker said that an advisor to Ukrainian President Volodymyr Zelensky asked Volker to connect the advisor to Rudy Giuliani, a personal attorney for President Donald Trump.

“[I]n May of this year, I became concerned that a negative narrative about Ukraine, fueled by assertions made by Ukraine’s departing Prosecutor General, was reaching the President of the United States, and impeding our ability to support the new Ukrainian government as robustly as I believed we should,” Volker said. “After sharing my concerns with the Ukrainian leadership, an advisor to President Zelensky asked me to connect him to the President’s personal lawyer, Mayor Rudy Giuliani.”

“I did so solely because I understood that the new Ukrainian leadership wanted to convince those, like Mayor Giuliani, who believed such a negative narrative about Ukraine, that times have changed and that, under President Zelensky, Ukraine is worthy of U.S. support,” Volker said. “I also made clear to the Ukrainians, on a number of occasions, that Mayor Giuliani is a private citizen and the President’s personal lawyer, and that he does not represent the United States government.”

Volker vehemently denied that he ever urged the Ukrainian government to dig up dirt on the Biden family.

You can read the full testimony here:

The truth does not matter to the Democrat. Only the narrative and the dialectic.

notamemberofanyorganizedpolicital in reply to dystopia. | October 4, 2019 at 4:32 pm

They show Schiff meeting at the event with Fusion GPS Founder Glenn Simpson a key figure in the Russia collusion scandal. At the time Simpson was an important witness in the House Intelligence Committee probe who had given sworn testimony about alleged, but still unproven, collusion between Russia and the Trump campaign.

Simpson also ran the firm hired by Hillary Clinton’s campaign and the DNC to find dirt on Trump. He employed retired British intelligence operative Christopher Steele, whose infamous and unverified dossier became the main evidence for the FBI’s probe of the Trump campaign, particularly the surveillance warrant against Trump campaign adviser Carter Page.

GOP Leader McCarthy: Adam Schiff Needs To Be Removed From The Chair Of Intel Committee

“President Trump tweeted his agreement with a call for Adam Schiff to step down as Chairman of the House Intelligence Committee from House Minority Leader Kevin McCarthy Wednesday night on FNC’s “Ingraham Angle.”

“Every time they have attempted a coup, there’s been one common denominator: the lies and deceit of Adam Schiff,” McCarthy told Fox News host Laura Ingraham. “He is now, as you know, a fact witness, and nowhere in our justice system allows a fact witness to be the prosecutor. He needs to recuse himself today, and the Speaker needs to remove him as the chairman of one of the most sensitive committees that we have — the intel committee.”

“….By May of 2019 it was also known that Democrats solicited Ukraine to ‘dig up dirt’ on the Trump campaign—which has now been admitted by Ukraine—using these same U.S. government entities as conduits to assist the DNC (Democrat National Committee) using a Ukraine-American spy, Alexandra Chalupa.

This was all confirmed by POLITICO in its rather amazing article published January 11, 2017, (they are extremely anti-Trump) but it’s out there. The Ukraine admitted what was done, and apologised. (https://www.politico.com/story/2017/01/ukraine-sabotage-trump-backfire-233446)….”

Ibib.
But there is a new sheriff in town folks

Donald J. Trump is not a RINO or DC insider. He’s a tough-guy billionaire from Queens, New York and a street-fighter.

When the Democrats realised last week that Trump was actually heading up his own investigation rather than leaving it to their Deep State apparatchiks—and doing so directly with the leaders of Ukraine, Australia, and Italy (and perhaps the U.K.)—they did the political equivalent of starting a fire in a theatre.

“House of Representatives Speaker, Nancy Pelosi, announced impeachment proceedings against the president just three hours after stating in a speech that she would not…..

This wasn’t a “whistleblower.” This was a spy working against the Trump administration. The complaint this spy filed should be Exhibit 1 at his/her trial. The first witness to be called should be adam schiff, except schiff has his own legal problems in all this. What a absolute $hi+ show. Now it’s being reported the spy did not disclose to the ICIG his/her contact with the congressional committee. Going from bad to worse for the democrats.

notamemberofanyorganizedpolicital in reply to CKYoung. | October 4, 2019 at 4:39 pm

I think we can coin a new phrase: “this is an absolute schiff show”

notamemberofanyorganizedpolicital in reply to healthguyfsu. | October 4, 2019 at 5:17 pm

Adam is in Deep Schiff now.

“I can’t believe the Democrats would completely stage something false like this in order to ‘resist’ Trump…” said nobody, ever.

notamemberofanyorganizedpolicital in reply to Andy. | October 4, 2019 at 7:23 pm

And not just Democrats…….

“So why did Romney want to shut down any investigation of Ukraine’s role as well?

……Romney’s National Security Advisor, Joseph Cofer Black, sits on the Board of the same Burisma Holdings that was being investigated for corruption back in 2014, and the Vice President and Obama Administration demanded be shut down. Why? Because Burisma was/is their vehicle for corrupt practices in Eastern Europe.

And CIA Director, John Brennan’s 9/11 Deep State partner, Cofer Black, is still the link to all that goes on there. In fact, I can state unequivocally that Burisma is the centre of Ukraine corruption and the Democrats’ shadow organisation for corrupt activities. I live in Eastern Europe (Poland) and my sources are first-hand.

….this matters greatly to Mitt Romney as he is not yet done with politics. If Black is busted, it will reflect on Romney, and it only makes sense that Cofer Black is the Deep State ‘plant’ in case Romney ever rises above polishing knobs in the U.S. Senate.

Romney wants to run for President again in 2024 and if he wins, Cofer Black will be back with his fingers on the strings either as DNI or CIA Chief of Corruption.

Burisma Holdings is the hub of U.S. Democrat activities to corrupt both Ukraine and American politics and there is proof. Ukraine President Zelenskyy’s win surprised both Brennan and Black’s Deep State ops as much as Trump’s did in 2016 in America.

So who is this Cofer Black guy?

Joseph Cofer Black, joined the CIA in 1974 and rose to be Director of The National Counterterrorism Center, before joining Mitt Romney. If it were not for researching this article, I admit, he was unknown to me as well. What a revelation.

Black was also the Head of Counterintelligence who somehow missed the 9/11 attacks on New York and Washington, though according to The Economist, 16 foreign leaders and heads of intelligence agencies warned him it was not only going to happen but when. Oh well. And nothing was done about Cofer Black for this, indicating this is what the Deep State wanted.

But it goes deeper. John Brennan and this guy, Cofer Black, are how 19 terrorists got into the U.S.A. to attack the U.S. on 9/11. Editor Harry will jump on me or make Nurse Ratched give me a dose of Castor Oil if I say something I can’t prove, so I’m just going to quote the CIA whistleblower at the Jeddah, Saudi Arabia CIA staff hearing, who is the source….”

CKYoung in reply to notamemberofanyorganizedpolicital. | October 4, 2019 at 7:39 pm

Great info. We need to find out more about Solamere Capital and romney’s offshore shell companies.

notamemberofanyorganizedpolicital in reply to CKYoung. | October 4, 2019 at 9:22 pm

Thanks for the links.

Wish I could remember the web site I saw today, but it was on a study of the GOPe Never-Trumpes. (Think it was just posted today also.)

Its analysis was that the real Never-Trumpers were not the true conservatives of the Republican Party, but where the “Liberal Republicans” (Mittens from the Mass state, etc.).

J Motes in reply to notamemberofanyorganizedpolicital. | October 4, 2019 at 10:09 pm

Shoot. Meant to post this as a response to the above comment. You’ll see it repeated in the comments below, but I wanted to repeat it here so as to link it to notamemberofanyorganizedpolicital’s comment.

You may have read it at Ace of Spades, in the post titled “Absolute Shock CNN Poll: It’s not the “True Cons” of the Republican Party Who Are NeverTrump, It Is the Moderate/Left Wing of the GOP That Is NeverTrump” —

Barry in reply to notamemberofanyorganizedpolicital. | October 5, 2019 at 9:28 am

Well, all you have to do is pay attention to the neverTrumpers that claim to be conservatives when they comment here. Over time you’ll notice they are always providing aid and comfort to the commie progs…

I wonder if it’s legal in Ukraine for a foreigner to extort kickbacks from a govt entity that was awarded a grant from that persons govt.? who knows Don Joseph may have went over there’s with a couple a torpedos and….

One more thing. Wasn’t Joe very vocal about China’s being currency manipulators about 12 yrs ago
Now I’m hearing Hunter got 1.5 nil some time ago and now Joe’s crickets about currency manip.

You may have read it at Ace of Spades, in the post titled “Absolute Shock CNN Poll: It’s not the “True Cons” of the Republican Party Who Are NeverTrump, It Is the Moderate/Left Wing of the GOP That Is NeverTrump” —