“You just ran into two people from New York, kiddo, and we’re not putting up with your Republican bulls–t” 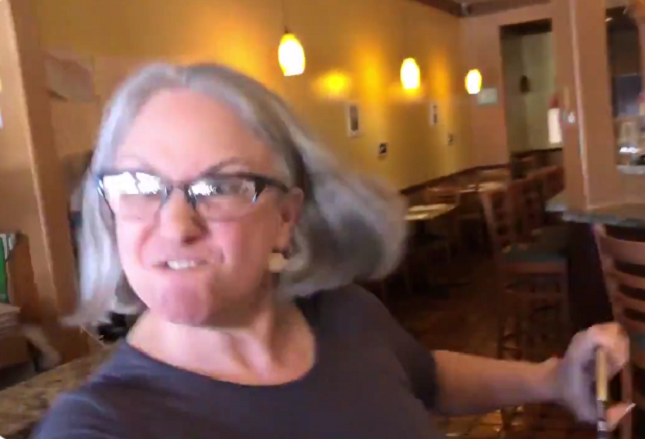 Sen. Rand Paul (R-KY) was trying to enjoy his lunch with his deputy chief of staff Sergio Gor when he was accosted by lefties concerned about incivility.

The incident occurred in California, but the woman screamed that Paul and Gor had “just ran into two people from New York, kiddo, and we’re not putting up with your Republican bulls–t.”  At one point, she circles around and flips Paul and/or Gor the bird.  Charming.

Republican Sen. Rand Paul was confronted by two people while eating lunch Friday with his staff at a California restaurant.

Paul’s deputy chief of staff, Sergio Gor, captured the moment in a video he posted to Twitter.  “While having lunch with @RandPaul in California, we got verbally assaulted by these aggressive libs complaining about incivility,” Gor wrote. “Check out the vid! #unhinged”

“You just ran into two people from New York, kiddo, and we’re not putting up with your Republican bulls–t,” the woman in the video shouts at Gor.

. . . . Paul retweeted the video and said that while “the left blames incivility” on the president, he urges voters to “watch this video and decide who the rude ones are.”

While having lunch with @RandPaul in California, we got verbally assaulted by these aggressive libs complaining about incivility. Check out the vid! #unhinged pic.twitter.com/IdOTdc3pOC

The left blames incivility on @realDonaldTrump. Watch this video and decide who the rude ones are… https://t.co/qtEx0wLH2A

I just love being lectured on civility by someone who is acting completely uncivil. Doesn't it just warm your heart?

Those on the Left are plagued neither by self-awareness nor introspection.

If this means that they are stump stupid, I’m with ya.

If accosted like that in the future… order up a knuckle sandwich. A nation can not endure… half sane and half insane. I do think it has unmasked a serious mental health issue as Michael Savage talks about.

It really isn’t difficult to understand that they have some kind of mental disorder when you look at the convoluted beliefs they hold. So many are at opposite ends of the spectrum that it defies logic, so when you have to twist your mind to match principles which you have been told you have to have it leads to confusion and mental illness.
This has been building for a long time, and it finally can’t be hidden any longer.

She is a piece of work, isn’t she?

She’s a piece of something, that’s for sure!

If Paul ate at taco trucks he’d never need worry about this sort of thing happening because working class people rarely behave like crazy people – it’s the dignified-gentrified white leftists who are the insane lunatics of our society.

The only people I have cut off social contact with due to their obnoxiousness were educated liberals. Not working stiffs.

She could be charged with disturbing the peace. I encourage anyone accosted by an out of control angry person to contact the police and file a complaint. It they touch you, or hit you, report an assault. Do not respond in kind. Just get the police involved.

My opinion is the woman is deranged and dangerous. She is not able to control violent emotions.

Does this qualify for red flag law to take effect?

Huh? She doesn’t have guns. She’s probably deathly afraid of them.

Well you don’t KNOW that she doesn’t own a gun. I say, why take a chance? That “red flag” law is there to be used, and I say, use it on liberals. Then perhaps they’ll start getting the message.

I agree. Makes sure some far-left lefties who are totally “innocent” of gun ownership get to experience the indignity of a search of the entire household for firearms. Or, alternatively, DON’T get their entire house turned inside-out, setting a clear precedent for future searches for this reason.

Since in a lot of localities the Red Flag Laws do not require identifying the informant or proof of personal knowledge of the subject of the complaint, we can be sure that a lot of the complaints will be falsely made by the Left [in or out of government] for harassment purposes. Even if there are NO firearms there, it will likely be a full force SWAT type raid. Which tears things up, and would possibly drive the subject to violence whether they are innocent conservatives or Leftist Special Snowflakes. Why shouldn’t TWANLOC suffer the same things they will inflict on us? Including the risk of becoming casualties either through deliberate Leftist government intention or use of excessive force.

Excellent thinking and quite humorous! I bet you are correct. And as a liberal, she is more likely to live in a place with a Red Flag law that denies her rights and due process. We should all get smart on these laws.

I can see your point, but you have to factor in the location. In any polity controlled by the Left, no complaint will be accepted and likely you will be charged. Comes with living in a country with no rule of law and no Social Contract.

New York is FILLED with fat, ugly, liberal windbags such as this specimen.

I wrote this the other day and posted it on facebook:
I figured out why liberals insist Trump is a threat to democracy.

Liberals have called on the military to remove him.

Liberals have suggested assassination of Trump is a good idea.

Liberals have called for his removal by any means possible, even if not in the Constitution.

IOW – LIBERALS will destroy democracy to get Trump if they get a chance. And it’s all his fault!

They’re like wife beaters -She made me do it!
*************
Case in point- the uncivil New Yorkers. I should invite to dinner here in CNY in my small little rural town. I’m sure he’d be welcomed.

She is all of a piece with our ever more coarse and vulgar society.

These people are fanatics, zealots lacking a scintilla of introspection and self-awareness, inasmuch as they represent exactly what they claim to oppose – infantile, thuggish, jackbooted totalitarians, brimming with self-perceived, messianic sanctimony.

They are dangerous as hell.

“I will never understand why people come after rand paul, hes as tame as they come”

That’s why they do it to him. He does not look like a physical fighter.

People like her put you in a box car and brag about it.

In other words, she is just a normal Democrat, just waiting for her chance.

And will they be hungry when Ms. Congeniality gets back to New York.

This is Greta Thunberg at 50.

If she makes it.

Rand Paul is not “uncivil” in his speech. When liberals complain about “incivility” they mean “does not agree with me” and especially they mean “refuses to submit”.

Imagine how she would have reacted if Rand Paul was wearing a red MAGA hat.

Speaking of MAGA hat, remember the MAGA hat theft near San Antonio over a year ago? It is still crawling through the court system.

Little Fascist twerp. Incivility for me, but not for thee.

I’d like for her to dare try this here in Texas!

The only thing that stops this behavior is the threat of a vicious ass beating.

What is that in her left hand? From here it looks like it could be a pair of wire cutters or some other hard object, and she is stretched out like a south-paw delivering a hard slider. That object delivered like that could hurt you. It looks like appropriate force to defend oneself could be in order.

The best defense is a quick offense, or something like that. A right cross applied just in front of the left ear should suffice.

To the Leftists fools/tools their gross behaviour is a feature, not a bug. In the dictionary next to A-hole is their photo.

Probably the product of a dr. spock, participation trophy, you can do no wrong, you’re the center of the universe upbringing.

Q: What’s the difference between paranoid-schizophrenics and these two New Yorkers?

A: Paranoid-schizophrenics are way more grounded in reality and their conditions can be medicated.

Any wonder people from NY are disposed…

Looks to me like their fat asses need to be yelling at people while attending sessions at their local Weight Watchers outlet. The husband reminds me of that scene from the movie Casino where Joe Pesci says to the customs inspector, “Don’t look at me, pal. I gotta live with her.”

Looks to me like their fat asses need to be yelling at people while attending sessions at their local Weight Watchers outlet. The husband reminds me of that scene from the movie Casino where Joe Pesci says to the customs inspector, “Don’t look at me, pal. I gotta live with her.”

Rule 1: Laws are only enforceable through the PROMISE of violence, up to and including the use of deadly force. Absent firearms, deadly force is achieved through some form of hand-to-hand/person to person combat. If a person such as lb zimmerman encounters another person who wishes to do violence to her, the likely course of action is she will call the police, who have firearms, because (see Rule 1). lb will call the police because she is likely in all cases to lose a physical/hand-to-hand combat encounter. The police will show up, armed, with the understanding they will use force on lb’s behalf, up to and including the use of deadly force. Let’s play this out:

Do you see where this goes each and every time?

Cop: Get out of the street, you’re holding up traffic and might get hit by a car.
suspect: F-U MAN, F-OFF, I WILL WALK AND STAND WHERE I WANT!
Cop: I asked you, now I’m telling you, get out of the street.
suspect: Attacks cop before cop can get out of cop car. Breaks cops orbital bone, tries to take cops pistol.
Cop: Fends off suspect, shots fired in cop car, suspect walks away in middle of road.
Cop: Gets out of cop car, can’t see well (broken orbital bone), “You’re under arrest for assaulting a cop!”
suspect: FU man, I’m going to beat you even worse (charges towards cop)
Cop: 12 shots later, 6’4″ 292lbs suspect goes down.

Cop: Get out of the street, you’re holding up traffic and might get hit by a car.
suspect: F-U MAN, F-OFF, I WILL WALK AND STAND WHERE I WANT!
Cop: Ok, have a great day.
suspect: Killed by motorist that didn’t see him in time.
suspects family: OMF-G WHY DIDN’T YOU MAKE SUSPECT GET OUT OF ROAD! $25 BILLION LAWSUIT!!!
motorist: OMF-G WHY YOU LET suspect WALK IN STREET WHERE I KILL HIM!? ME HURT FEELING! $25 BILLION LAWSUIT!!!

We are a county of laws. Laws are enforced through the PROMISED use of FORCE (violence), up to and including deadly force.

lb zimmerman, when she acts like this, should first sign a societal contract essentially stating: If my behavior results in violence against me, I will NOT call the police to come do violence on my behalf. Because I am against guns, and I am against violence.

Just more proof that Leftists are deranged and Leftism is a mental illness.

The b**ch in the picture looks REAL CIVIL, doesn’t she? Are all liberals born mentally ill or do they teach it in their schools? I wonder?

The b**ch in the picture looks REAL CIVIL, doesn’t she? Are all liberals born mentally ill or do they teach it in their schools? I wonder?