PG&E admits equipment started 10 fires in 2019; one man may have died after power-shut off; NorCal city establishes power-out curfew. 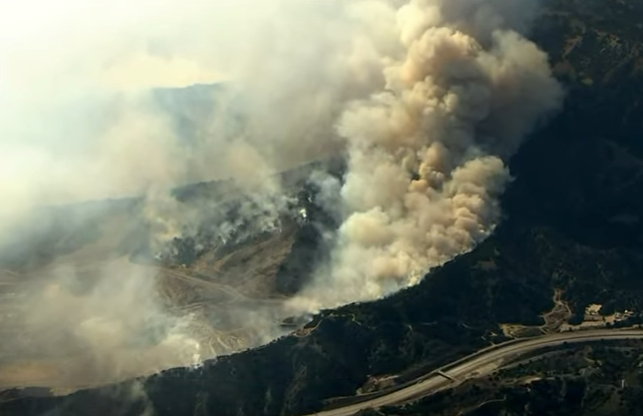 Another large wildfire is burning in the Los Angles area, sweeping its way through the northern foothills of the San Fernando Valley. It is blasting approximately 7,500 acres, burning at least 25 homes, and forcing thousands to evacuate.

The Saddleridge fire, which broke out about 9 p.m. Thursday on the north side of the 210 Freeway in Sylmar amid strong Santa Ana winds, spread rapidly westward into Porter Ranch and other communities. At its peak, the blaze was moving at a rate of roughly 800 acres an hour. The fire is 13% contained.

Mandatory evacuations were issued overnight to roughly 23,000 homes encompassing a large swath of neighborhoods north of the 118 Freeway from Tampa Avenue all the way to the Ventura County line — an area covering 100,000 residents. Officials warned that other communities near the fire need to be ready to leave at a moment’s notice if the winds shift.

The Santa Ana winds that blow this time of year are notorious for spreading wildfires. However, Pacific Gas and Electric has recently admitted in court that its equipment may have started 10 blazes this year already.

The largest utility in California told a federal judge in San Francisco that the small fires appear to have been ignited by equipment damaged by trees, vehicles or animals, according to court documents filed this month and first reported by the Sacramento Bee.

“PG&E has provided additional information at the request of the court,” the utility said in an emailed statement to the Los Angeles Times on Thursday. “As we have said throughout this process, PG&E shares the court’s focus on safety and recognizes that we must take a leading role in reducing the risk of wildfire throughout Northern and Central California.”

I would like to point out that if the state’s electric supplier wasn’t forced to spend $42 billion chasing green energy schemes supported by California politicians, it might have had enough money for maintenance and repair.

Meanwhile, in the rest of the state, the power-outages continue and 1.5 million citizens will be left in the dark for some portion of the day. Sadly, the shut-down may have led to the death of one man dependent on oxygen.

Authorities said Friday that a man dependent on oxygen died about 12 minutes after PG&E shut down power in El Dorado County Wednesday. Although he could not say if the shutdown caused the man’s death, El Dorado County Fire Chief Lloyd Ogan said the man’s oxygen equipment required power.

Ogan said fire crews arrived at a residence in Pollock Pines after 3:30 a.m. to find the man, in his 60s, unresponsive.

One Northern California city is planning to enforce a temporary curfew in darkened neighborhoods.

Morgan Hill Police said in a press release that the curfew would begin when the power is shut off and continue until 6:30am Oct. 10. The curfew would only apply in the areas of the city where power has been turned off, and is intended to discourage loitering in darkened public spaces, according to city staff.

Explain to me how a high tax state like California has to turn power off to people in 34 counties because the infrastructure is such garbage that it might cause wildfires?

But keep trying to tell everyone else how to live, y’all.??https://t.co/VfxJrHJPGL#poweroutage

The fire danger in Southern California will continue through tomorrow.

In Northern California, hundreds of thousands of homes are without power during the largest preventive outage in state history. pic.twitter.com/YMyTZyZjB1

I would like to point out that if the state’s electric supplier wasn’t forced to spend $42 billion chasing green energy schemes supported by California politicians, it might have had enough money for maintenance and repair.”

Alternatively, they could have spent that extra money if the State would have allowed them to raise rates to compensate. Ah, but that would have sparked a political backlash, so that was unacceptable as well.

This is why 3rd world countries have utility systems that are in a state of constant failure, and why everyone responsible says it’s just “bad luck” that no one could possibly have prevented.

And if the State hadn’t pissed away billions on a high-speed railroad to nowhere, they could have used that money to clear underbrush and dead trees.

Actually they have a long term price gouging scheme that goes back to when Enron would gouge them for peak usage – provide the power but at huge markups.
https://www.risk.net/commodities/energy/2441392/enrons-california-schemes-haunt-regulators-15-years-later

The “gouging” is self-made. Democrats don’t know how to make deals. Period.

If I sell you a bridge for 10 million dollars and you gladly pay it because you think it’s a steal, is it really my fault?

To add to the fun, solar energy for many PG&E customers doesn’t work in a blackout. Their systems were not designed with battery storage, but rather fed the solar power generated straight to the power grid, then got power back when needed. It looks like all of the power generated by many of the PG&E was cycled through the grid, and so, without the grid, is completely wasted and is unavailable to the subscribers, even when the sun is shining and the solar panels could be generating electricity.

And….. a lot of the people with solar panels didn’t know this ahead of time.

Same thing in Florida after hurricanes. “Whaddaya mean I don’t have power!? I’ve got these panels on my roof!”

They can swap out their inverter with one which is designed to operate with or without a grid connection. If the solar array is properly configured they could hook a second cheape inverter to the solar panels and have power during the day. They could also use a generator, or better yet a generator inverter hybrid, where the inverter starts and stops the generator as needed, running light loads from the batteries.

Then there is an even better system which combines solar electric panels, generator, batteries, solar panels and both on grid and off grid synchronous operation. In that case the inverter can sync to the generator. I have one of those inverters, it can add 4kw as long as there is batter capacity to the generator continuously, 8kw for 5 minutes and 12kw for 1 minute. Since I live in a cold climate, I have LP, gasoline and diesel generators. Short term outages I use LP (typically having 1600 to 2400 gallons on hand), longer outages I use a diesel (in winter the diesel generator is warmed up from the LP or gas generator running first).

The Reuters video briefly shows a power pole with a huge bird nest at the top. WE MUST STOP THIS UNCHECKED FOWL REPRODUCTION. I propose killing all birds capable of building nests larger than an unladen European sparrow. Such and easy fix! Gawd, Californians are such frak’n dolts.

I-80 between Pinole and the valley at the Cherry Grove exit. A cat climbed to the top of a power pole and stepped onto a hot power line – the result? The cat was literally fried in place and it’s fused skeleton remained in that exact spot for about two years. We need to declaw all cats. It’s the responsible thing to do.

I’ve come across a raging valley brush fire sparked after someone drove their car onto the I-5 the median strip just north of Willows. They literally created a burning strip of grass 50 yards long – catalytic converter are white hot and light dry grass on fire. That fire jumped the southbound lanes and started to burn along irrigation ditches.I saw this real-time.

We, as responsible Californians, should outlaw I-5 and cars and people. And if a Texan tourist accidentally creates a median fire. Immediate execution via tree, rope and horse. Why? That seems a bit extreme? Because I’m Xerxes; capricious emperor-god-lord.

We also need to outlaw thunderstorms, funnel clouds, tornadoes (yes, we have tornadoes in the valley) because dry strikes cause wildfires in our national forests. And if innocent people get caught in a firestorm and are roasted alive? Screw them. Because progs. (never mind that many of the mountain counties vote conservative.) They deserve to a horrible, painful end to their lives! I blame those stupid, stupid, stupid Californians because they’ve not cut down millions of acres of forest. Such an easy fix!

Headlin3e says that four freeways were shut down. The article says NOTHNG about freeways being shut down.

yeah I noticed that, maybe the la times video mentions it but I didn’t watch. all other links say nothing about it

Here’s a list of the freeways that were open / closed on Saturday: https://www.dailynews.com/2019/10/12/saddleridge-fire-heres-a-list-of-freeways-open-and-shut-on-saturday/

And here’s a further update from Sunday morning: https://www.dailynews.com/2019/10/12/saddleridge-fire-is-19-contained-growth-slows/

It appears that Six Flags Magic Mountain was closed due to freeway closures. https://www.dailynews.com/2019/10/11/six-flags-magic-mountain-closed-because-of-fire-related-freeway-closures/

I hope this helps!

I have power lines running across my property.
I have trees that grew up and interfered with lines.
due to the planting (before I had bought property) the growth was my responsibility.
so…..I cut some f’ing trees down to prevent issues.
what a god damned concept…..

And this bit; After the CARR fire was finally extinguished? Leftist message boards were rife with many of the same type of comments I see on conservative message boards. What, pray tell am I talking about?

53% of voters in the Redding/Shasta county voted Trump. Leftists were saying how Redding residents got their just desserts because Reich-winger and Jefferson.

And right wingers were saying how they got their just desserts because prog.

Ever get the feeling that there’s no justice in this world?

Fire is a way of life in California: it’s a crucial part o the ecosystem. Building in fire zones is a disaster, like building in a hurricane zone, or building in a tornado alley.

Unlike hurricanes or tornadoes, fires can be mitigated (by allowing them to burn, periodically, so no ‘super firestorms’ can develop and by not building in fire areas (or building concrete buildings in such areas).

But leftist morons run california, too busy looting the state’s treasury than to be bothered with things like fire and water projects. (Not a single water project has been built in CA in decades.)

Bottom line, re california: it is a Cloward-Piven laboratory, and it’s running head-long into ruin – on purpose.

Whenever I see these news articles I wonder whatever happened to Troy Hurtubuise and his firepaste.

Why are we conflating Los Angeles fire stories with PG&E stories. I believe the power company serving the LA area is SoCalEdison. At least it was when I lived there. Further on down it is SDG&E.

I take it that it is only in California where people build houses right up to the forests, and even inside the forested area? No one else up and down that coastline, or even in mountainous areas throughout the US seem to suffer so regularly and extensively from fire problems. Yes, such fires happen elsewhere, but those fires never play out in any manner close to what goes on in California.