Meanwhile, progressives respond to the news with the discretion and dignity we have come to expect. 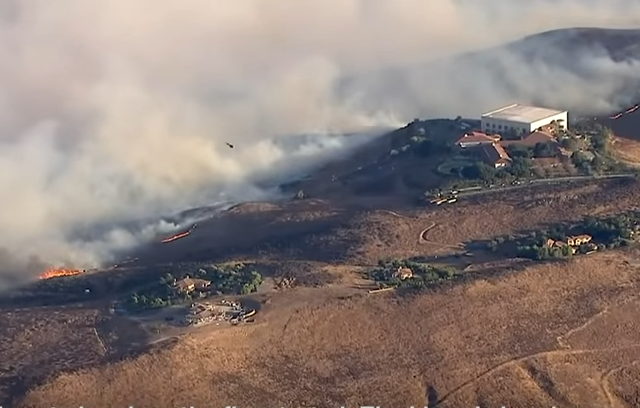 As the winds of October continue to buffet the state, brush fires have broken out across Southern California, forcing mass evacuations, closing major freeways, and threatening the Ronald Reagan Presidential Library.

The cycle of fire began Wednesday morning when flames surrounded the library and museum in Simi Valley and stalked nearby neighborhoods as it swiftly scorched hundreds of acres in Ventura County. As the day wore on and the winds howled, more than a dozen other smaller fires erupted in communities including Riverside, Santa Clarita, Brea, Whittier, Lancaster, Calabasas, Long Beach, Nuevo and Jurupa Valley.

The outlook was brighter in Northern California, where thousands of evacuees began to return home as firefighters started to gain the upper hand on the wine country blaze that has scorched more than 76,000 acres and burned dozens of homes.

The biggest battle Wednesday was in Ventura County, where 800 firefighters trying to control the wind-whipped fire surrounding the presidential library were stymied by intense gusts that sent embers flying far beyond the body of the blaze. Helicopters repeatedly dropped loads of water around the Reagan complex, which is perched atop a hill blanketed in dense brush, amid 60-mph winds that were strong enough to knock a person off balance.

It turns out a contributing factor in the successful protection of this historic complex is the use of goats to graze on the brush.

Library spokeswoman Melissa Giller said the Ventura County Fire Department brings hundreds of goats every May to eat the brush around the perimeter of the library to create a fire break.

“The firefighters on the property said that the fire break really helped them because as the fire was coming up that one hill, all the brush has been cleared, basically,” she said.

Once I read that the Reagan Library was threatened, I braced myself for some liberal snark regarding the institution and the historic presidency. I was not disappointed.

CNN Commentator Keith Boykin initially tweeted an link to the story with the comment: “For those who think God punishes sinners with natural disasters”. In the wake of receiving an epic ratio, Boykin deleted the comment, explaining that we readers were confused about his intent.

Earlier today, I posted a tweet to make the point that God does not punish people with natural disasters. Unfortunately, many people interpreted my tweet to say the exact opposite. To clear up any confusion, I have deleted the tweet.

Of course, climate alarmists and Reagan haters had to chime in with their digs as well.

If the Reagan Library catches fire they’re just going to spray water on the trees surrounding it and let it trickle down.

climate change fueled wildfires threatening the reagan library is way too spot-on of a metaphor pic.twitter.com/5YX3vT09iG

Me when I heard the Ronald Regan library was about to burn down pic.twitter.com/vfNqKaaiPk

Good to see that progressives continue to act with the level of discretion and dignity we have come to expect.

I sure hope that the library remains safe. In addition to all the wonderful, historic treasures and the Reagans’ burial site, there is an exhibit on Egypt’s Lost Cities I have every intention of seeing there during the upcoming holiday season.

This past weekend our new temporary exhibit, Egypt’s Lost Cities, opened! Come discover more than 200 authentic artifacts, including three colossal 16-foot sculptures of a pharaoh, a queen, and a god.#ReaganLibrary pic.twitter.com/2ly8sIgQy9

Maybe the rest of CA will get a clue.

We’re flying to Burbank next week, a long ago planned trip with an itinerary that was to include seeing the Reagan Library. While I’ll be sad not to visit it, my only real wish is it not destroyed by the fires.

The immaturity and juvenile mindset of liberals and Democrats is beyond the comprehension of normal adults.

Forget ‘maturity,’ and the like: this is narcissistic derangement on a scale that presents a great danger of violence.

The only thing these people understand is power: we need to show them such power in push-back, or we will surrender our country and our lives to them.

oh, they’re mature, all right. They’re just criminals fighting to return to their gravy train. Nancy Pelosi’s entire family, including the governor, has grown immensely wealthy from the family business of politics.

When Houston flooded after hurricane Harvey a cartoonist was snarking about god and the flying spaghetti monster and Christian flood refugees. I think LI bloggers linked the cartoon.

The 2018 NorCal Shasta County CARR fire; leftists on comment threads mocked Redding area residents getting burned out of their homes because Shasta County voted 57% for Trump.

Conservatives do the same thing. I freely admit to being hypersensitive about it. I get scoldy and petulant. I hate petulant scolds.

They like to think they’re snarky? Just wait until rbg kicks off and watch my comments.

“If the Reagan Library catches fire they’re just going to spray water on the trees surrounding it and let it trickle down.”

I’m afraid to ask what that is trickling down Michael Dale’s chin.

No need to ask. We can all make an educated guess.

Liberals are at their core trashy people.

So I guess the left is pretty butthurt that capitalism helped save the Reagan Library. After all, those weren’t government goats, they are goats that are raised and rented out by a private individual for clearing out underbrush.

And bring $100 a head to Mexicans looking for a holiday or special day meal. At least they do to Filipinos and the small Mexican community in my county.

Hell, Next week I hear newsom and the legislature will try to fine the goats for defacing the scenery.

Do the goats have a permit?

It is appropriate, the Greatest of All Time, his library saved by goats.

Climate change is like snake oil.
You can even use it as fuel!
And I heard that if you put some on the tip of your toe it gets rid of colds and the flue.

Turns out using goats to clear out underbrush is popular in California (and sheep for overgrown grassy areas). Who knew?
https://www.cnbc.com/amp/2016/07/19/goats-sheep-reducing-californias-fire-risk-one-bite-at-a-time.html

Once we noticed that our goats liked poison ivy, they had a permanent home. We also had a huge wild rose patch in the pasture about 25 ft in diameter that they defoliated and destroyed over the summer. They are truly machines.

I thought they’d complain about the methane in the goat farts.

Goats are used here around the Seattle area to get rid of unwanted blackberry patches. Doing it by hand is extremely difficult, but goats will clear them out for good.