“An official standing in front of the audience attempted to talk about Penn’s First Amendment rights and the event’s intention over the protesters, but they continued chanting.” 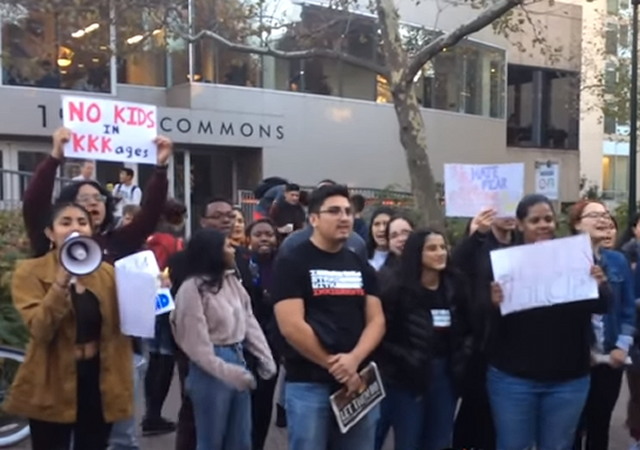 Former acting ICE chief Tom Homan was supposed to speak during an event at the University of Pennsylvania this week, but student protesters decided they were more important. They made such a scene that the school ended up cancelling the event.

Homan left the stage amid loud chants of “No hate. No fear. Immigrants are welcome here.”

Perry World House abruptly ended a scheduled event Wednesday on immigration policy and escorted guests off the stage after one of the speakers, former United States Immigration and Customs Enforcement Acting Director Thomas Homan, was met with dozens of student protesters.

Students wielding signs that read, “Abolish ICE” and “No one is illegal on stolen land,” gathered inside and outside of Perry World House minutes before the “Detention and Deportation from Obama to Trump” event, which was scheduled to take place from 5 p.m. to 6:30 p.m. Before the protest, more than 500 students and alumni signed a petition demanding that Penn cancel the event because of controversial policies Homan implemented when he led ICE.

At about 4:45 p.m., protesters lined the outside of the building and sat in the event room filled with attendees. The students inside were chanting, “No hate. No fear. Immigrants are welcome here” and “Go home Homan.”

An official standing in front of the audience attempted to talk about Penn’s First Amendment rights and the event’s intention over the protesters, but they continued chanting.

Here’s a video, via Campus Reform:

This all began before the day of the scheduled event. Students and some alums were circulating a petition demanding that Homan not be allowed to speak at the school.

Over 400 University of Pennsylvania students and alumni have signed a petition requesting the school ban former Immigration and Customs Enforcement Acting Director Thomas Homan from speaking on campus.

Homan is scheduled to speak at the event “Detention and Deportation from Obama to Trump” at the university’s Perry World House today.

Joining Homan are Andrew Lorenzen-Strait, director of Children and Family Services at Lutheran Immigration and Refugee Service, and Sozi Tulante, Philadelphia’s former city solicitor who challenged the Trump administration’s attempts to withhold federal funding from the city because of its “sanctuary status.”

According to The Daily Pennsylvanian, the petition states

Under Homan, ICE continued to be a violent organization responsible for terrorizing immigrant communities, for the separation of immigrant families, and for the persistent violation of the human rights of immigrants and their loved ones. Consequently, inviting Homan as a guest speaker contradicts Penn’s claim of being a sanctuary campus that is committed to ensuring the well-being and safety of all of its students.

Homan spoke to FOX News about what happened:

“GO HOME HOMAN!”: Retired ICE Director, Tom Homan gives his side of the story after University of Pennsylvania protesters shut down an immigration event he was speaking at. pic.twitter.com/DJ85nmoqiL

Schools need to start anticipating this sort of thing and planning events accordingly.

Yes, they are, but our society educated them to act this way, and the establishment “higher education” system facilitates and encourages this. This will not change without the federal government withholding substantial funds from colleges and universities that do not take action to stop this type of behavior.

notamemberofanyorganizedpolicital in reply to Rick. | October 26, 2019 at 2:25 pm

Government Corrupt-o-crats:
“Free M.B.A.s for ALL!”

This is an Ivy League school.

“…the school ended up cancelling the event.”

They wanted it to happen, this way they show the Feds they “tried” but had to end it for safety reasons

Time to with hold large funds and heavily fine the University

That will stop this s-t
Time to cut funding

notamemberofanyorganizedpolicital in reply to gonzotx. | October 26, 2019 at 2:27 pm

Better yet, Seize all their Assets!!!!!!

Does this detritus not realize people in America are separated every day?? How many of you gradn[parents never see yoru grandkids?? Some because of moves but many because the kids gets a hard-on for some reason. Not a word form teh busy bodies ont hat front. Divorced families are the same way. Might try fixing that before you got off all stupid.

Emigration reform to mitigate the progress of immigration reform and collateral damage at both ends of the bridge and throughout. Immigration that does not exceed the rate of assimilation and integration before planned parenthood. Also, restraint of social justice adventurism that is a first order forcing of catastrophic anthropogenic immigration reform.

Schools need to start anticipating this sort of thing and planning events accordingly.

Penn should be ashamed. So should the other “elite” schools, for that matter. They are infringing on the rights of their own students, to hear the speakers, every bit as much as the rights of the speakers. And since they obviously NOT ashamed, I concur that it’s time to stop funding schools which tolerate (if not positively inculcate) Unconstitutional behavior.

Welcome to anarcho-tyranny, wherein officials permit lawless behavior instead of punishing it.

The action of the protestors is an expression of the School admins desires, or they’d shut it down in a heartbeat.

I teach at a major university — the one what wrote the best “free speech” statement out there today.

That’s how you handle it.

“Schools need to start anticipating this sort of thing and planning events accordingly.”

I believe they are.

.. penn is notorious for being left… as well as not very masculine… so little/no surprise here…

The totalitarian left does not argue.
They silence.
“Shut up!,” “You’re a racist!” “Lies” Distraction and for their supports promises of free things.

A few marksmen with rifles would do wonders for respect for natural rights.

UP was already on my list of colleges and universities to avoid.