As usual, Republicans are held to a much tougher and unforgiving standard than Democrats. 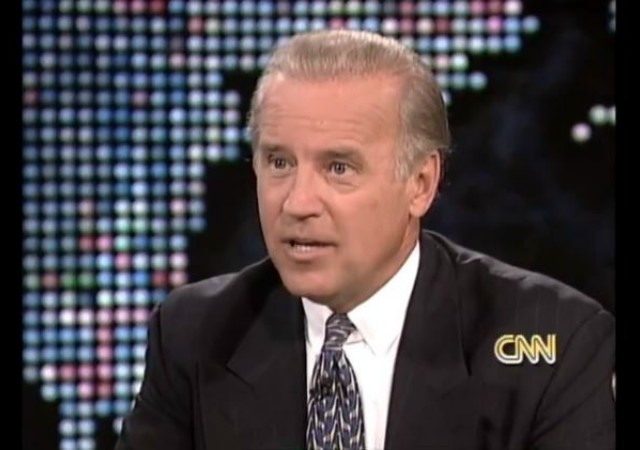 On Tuesday, Democrats and the mainstream media (but I repeat myself) erupted in outrage after President Trump asserted in an early morning tweet that the impeachment inquiry process he was being subjected to was “a lynching”:

The pile on commenced shortly thereafter. Here’s how the “journalists” at Politico framed Trump’s comments:

But the invocation of “lynching” to characterize a process explicitly sanctioned by the Constitution marked a new, racially insensitive show of malice by the president toward lawmakers seeking to remove him from office.

NBC News was quick to point out how many Democratic presidential candidates and black lawmakers were offended by Trump’s tweet.

CNN, which stays in full “Get Trump” mode 24-7, devoted an entire piece to quoting Republicans in the House and Senate who took issue with what Trump said.

The American people were to know and understand that in no uncertain terms, Trump had stooped to levels no one else ever would by referring to an inquiry that has virtually shut out the Republican minority and Trump’s legal team from the process as a mob-style “lynching.”

Unfortunately for Democrats and their enablers in the press, the Internet is forever and the C-SPAN archives go back decades.

Republicans dug into the wayback machine and found numerous referrals by Democrats to the impeachment proceedings against President Clinton as a “lynching.”

We’ll start with Joe Biden, who was the most high-profile Democrat to condemn what Trump said:

Impeachment is not "lynching," it is part of our Constitution. Our country has a dark, shameful history with lynching, and to even think about making this comparison is abhorrent. It's despicable. https://t.co/QcC25vhNeb

Oddly enough, then-Senator Biden didn’t hold that view when he discussed Clinton’s impeachment with Wolf Blitzer on CNN in 1998:

“Even if the president should be impeached, history is going to question whether or not this was just a partisan lynching or whether or not it was something that in fact met the standard, the very high bar, that was set by the founders as to what constituted an impeachable offense,” Biden said in an interview with CNN’s Wolf Blitzer.

After being caught with his foot in his mouth, Biden tweeted out an apology that included a lot of double-speak about how when he said it he meant it differently even though it “wasn’t the right word to use”, of course:

This wasn’t the right word to use and I’m sorry about that. Trump on the other hand chose his words deliberately today in his use of the word lynching and continues to stoke racial divides in this country daily. https://t.co/mHfFC8HluZ

As the USA Today also pointed out, Biden was far from the only one:

Biden was not the only Democrat to refer to Clinton’s impeachment as a “lynching.” A Washington Post report found at least five House Democrats used that word or “lynch mob” to refer to the process against Clinton. One of them, Rep. Jerrold Nadler, D-N.Y., chairs the House Judiciary Committee, which has jurisdiction over impeachment.

The reason the Washington Post and other Democrat-friendly news outlets like CNN even published such reports is because Republicans did the media’s jobs and found the old quotes and videos, a few of which showed that some of the same lawmakers who went off yesterday on Trump used the word “lynching” to describe Clinton’s impeachment.

Democrats are being total hypocrites right now in response to @realDonaldTrump's tweet this morning.

Dem. Rep. Gregory Meeks on Bill Clinton's impeachment in 1998: "What we are doing here is not a prosecution, it is a persecution and indeed it is a political lynching." pic.twitter.com/5wgjuzOYQt

“It’s a verbal political Lynching on the floor of the Senate” pic.twitter.com/LmvPb8VhPC

Last but certainly not least, let’s pause for a moment and reflect on Rep. Alexandria Ocasio-Cortez ripping Trump yesterday, and lecturing everyone on learning the history behind the word “lynching” just months after she repeatedly and unapologetically referred to border detention centers as “concentration camps.”

As usual, Democrats and the MSM have two sets of standards – the ones they hold Republicans to, and the far more lax standards they hold themselves to (also known as double standards).

There is nothing racist about lynching. Yes, some small but significant number of innocent black people were lynched over trumped-up charges because of their race. But the vast majority of lynchings over the course of US history, let alone world history, had nothing to do with race. First, most victims were not black, and second, most of the black victims were lynched not because of their race but because the mob genuinely thought them guilty of whatever it was they were accused of (and a good number of them may well have actually been guilty; the whole point of a lynching is that without a trial we can’t know).

When I hear the term, the first image that comes to my mind is the “necktie parties” in Westerns. Most of those were of white victims, most of whom were probably guilty.

you need to remember racism is the Democrats first line of defense, even though they practice it more than most in the US

The use of lynching as a terror tactic against black Americans was a tactic of the KKK, the original militant arm of the Democrat Party, precursor of “antifa” today.

Indeed, the KKK did use it in that way, and that was horrible. But this accounts for a smallish minority of all lynchings, even in the USA alone.

One of the best westerners about lynching is Ox Bow Incident. Starring Henry Fonda and Henry Morgan. Especially the after math of lynching.
Also Mulhouse my apologies on the #2 thumbs down. I hit it by mistake when clicking on reply.

Also, while I’m on the topic, a noose does not signify lynching, it signifies lawful execution, of which lynching is a deliberate parody.

Won’t be long before a mere rope throws leftists and the MSM into swooning hysteria.

The Democratic party was the KKK and Jim Crow party back in the days when lynching was raging. A BTW, lots of white people got lynched too. They haven’t changed.

Biden almost looked like a human in 1998, unlike a guy wearing a deadskin mask.

Glammed-Up Jill, an accurate descriptor is, like Joe, all show, no substance. Because of her looks (God-given, not the result of her efforts) she tried her hand at modeling (deep, meaningful stuff, if you peons don’t understand important things), indicating that style and looks are all-important to her. This would explain why Joe has become all-Hollywood (the hair plugs, the chi-chi clothing, the teeth, the Botox, the aviator sunglasses, the Amani shirts with two undone buttons).

Yeah, but they were instructed to be outraged at Trump’s comments, soo here we are.

Joe walks into Trump’s trap, and when confronted with video evidence of him saying the same thing he doubles down with “yeah, but Trump is intentionally dividing the country by race.”

Kinda like “…they wanna put ya’ll back in chains…” huh Joe?

I can’t decide if Joe Biden is just a moron, or if he’s suffering from clinical dementia, or if he’s just a lying piece of shit.

“yeah, but Trump is intentionally dividing the country by race.”

And he knows this how?

I’d choose all three, and I’d add “poisoned by Botox.”

Paul, embrace the healing power of “and.”

Creepy Sleepy Conniving Quid Pro Joe is all those things and more!

For the record, in California a lynching is the taking of a prisoner from a law enforcement officer by means of riot. 405 PC. Its a felony. It makes no difference what the rioters do with the prisoner once they get him.

Of note: If the prisoner incites the riot to free him, he can also be tried for lynching.

Laws in other states may as well define lynching to be something other than what is today’s hot topic in politic-land.

“I can’t decide if Joe Biden is just a moron, or if he’s suffering from clinical dementia, or if he’s just a lying piece of shit.”

I cannot decide if Joe Biden is a intellectually deficient jerk, suffering from clinical dementia or is a lying,thieving and all around piece of excrement.