“They need to be concentrating on the country, not what he’s doing wrong.” 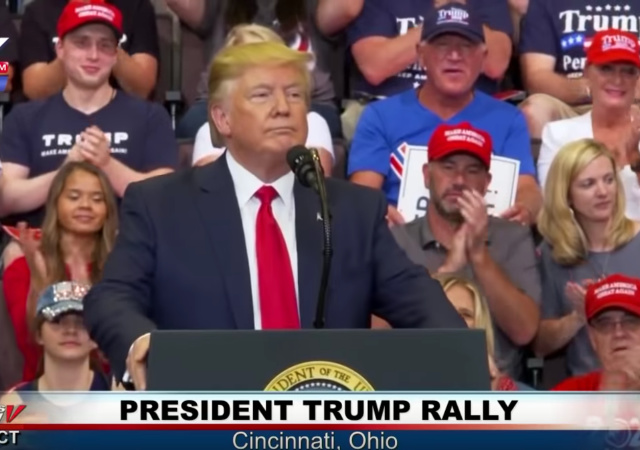 Republicans and Democrats have always kept their eye on Ohio because the state generally votes for the winner of presidential elections. The state has not only on four occasions.

But now it seems the Democrats have brushed aside the key state, especially with their rush to impeach President Donald Trump. An Axios focus group, which took place in an Ohio county Trump lost, found that impeachment has outraged voters in Ohio.

The Engagious/FPG focus group discovered voters “expressing a range of unease about impeaching President Trump, from fears it will hurt the economy to frustrations that House Democrats are more invested in going after Trump than in helping people.”

Nine of the 11 people within the group “raised their hands to say impeachment is a distraction from issues they care most about.” These include:

Trump hammered on those issues during his 2016 presidential campaign while failed Democrat presidential candidate Hillary Clinton focused on social issues.

It should not surprise anyone that those in flyover country care more about issues that actually affect them. Salena Zito of The Washington Examiner wrote a book about Trump voters after she traveled around the country. People she interviewed expressed the fact that they voted for Trump because he concentrated on these issues.

One Trump voter, Brad P., described the impeachment process as “a never-ending drama.” He said it shows him “these people are completely out of touch with everyday Americans’ lives.”

Other voters “doubted that Trump asked Ukraine to investigate Joe Biden.” Some people think that if he did it “didn’t think it warrants impeachment.”

Impeachment makes the voters feel concerned, uneasy, and exhausted. It frustrates them that the Democrats turned their focus on impeachment because it is “a big distraction from what we could be doing.” Some thoughts:

However, the focus group did not necessarily say the impeachment process has moved or kept them with Trump in 2020:

Only four of the participants said they will definitely vote for Trump again; one former Trump voter said he will vote for Andrew Yang; one Clinton voter, Lisa A., said she’s leaning toward Elizabeth Warren; and the rest are undecided.

Ohio Not in Play?

The 2016 presidential campaign saturated Ohio with ads and campaign stops, but has only seen “a handful of notable campaign events since spring.” The party turned off many Ohio Democrats, who changed parties before the 2016 campaign. Attorney Chris Gagin, a resident of Belmont County, told the Associated Press that “[C]onservative Democrats have become all but extinct.”

The parties used to campaign in Ohio because it once held all types of Americans in one state. The demographic has changed:

It’s whiter and slightly older than the national average. Just 29% of Ohio residents have a college degree, compared with the national average of nearly 32.6%. That education gap has translated into lower earnings. The state’s median household income is $56,111, nearly $6,000 below the national median.

Republicans run stronger with those groups. The GOP tilt is even more pronounced in places like Belmont County, which sits on the state line with Pennsylvania and West Virginia.

Democratic political consultant Aaron Pickrell believes Democrats will have an easier time taking back Michigan and Pennsylvania than Ohio. Republicans won the majority of the races in the 2018 midterm election, 12 to four.

While Democrats have not concentrated on Ohio, the party may not have completely given up on the state. It is holding its fourth primary debate in Columbus, OH, this week. But should the candidates and moderators make impeachment a key talking point?

Ohio Democrats told The Toledo Blade they want to hear about other issues besides impeachment.

Presidential candidate Rep. Tim Ryan (D-OH) wants the debate to center around the issues voters want to hear about, not just impeachment. He believes if they ignore the what the voters want it will cost the party Michigan, Ohio, Pennsylvania, and Wisconsin:

Mr. Ryan, who lives outside Youngstown, thinks that Democrats, both during the debate and going forward, need to focus on “bread and butter” issues such as wages, mental health, and opioid addiction.

“The conversations I’ve had with parents of students who go to school with our kids is so far removed from the public conversations that are happening on the TV networks,” Mr. Ryan said. “That’s why their anxiety level is so high and the frustration level is so high. Trump is on one side and the Democratic discussion is on the other, and none of it is connecting with real people.”

Dayton Democrat Mayor Nan Whaley would like the debate to showcase questions “on better wages and improving the lives of workers.”

This is a chance for Democrats to seize on areas in Ohio that have started to change blue:

It’s why Democrats chose Otterbein University in Westerville, a Columbus suburb that voted for Republican Mitt Romney and then Democrat Hillary Clinton, to host the debate on Tuesday. They’re using the location to underscore a trend — college-educated voters abandoning Republicans, who are making up the loss in rural areas — that they hope makes them competitive in 2020 and dispels the narrative that Ohio is now reliably red.

“When the suburbs that used to be the base of the Republican Party are turning blue, it dramatically changes the path to victory in Ohio for both parties,” Ohio Democratic Party Chairman David Pepper said.

Is Adam Schiff mentally unhinged or is he just a player?

notamemberofanyorganizedpolicital in reply to objection. | October 14, 2019 at 2:53 pm

He can be both of course……

“….we have the real reason why Ukraine is being flung at President Trump.

but more accurately, to protect several other key Democrats who are up to their necks in corruption and graft involving that country…”

While Democrats are pushing the bogus Trump-Ukraine quid pro quo story invented by that great storyteller, House Intelligence Committee Chairman Adam Schiff, two groups of Democratic senators have been colluding with Ukrainian interests to advance their own agenda and political careers.

Kudos to Steve Hilton for pointing out the corruption of the first group on the Oct. 13 edition of his Fox show “The Next Revolution” – a group of Democratic senators took cash from a Ukraine lobbyist to push Ukrainian gas interests at the same time the Democrats are pushing the Trump-Ukraine yarn. As Hilton states in a transcript of his show available on Fox Opinion……

Interesting article to go along with this one.

Claim: Fox News’ Pollster Manipulated Partisan Split to Make It Appear That Impeachment Was More Popular Than It Was

Correct link to that article.

Did anyone else notice how that bottom NBC clip was less than less than 20% Ohio voters interviews, but more than 80% of it was
NBC-DEMOCRAT PARTY propaganda?

Secret hearings, phony dossiers, collusion with foreign actors etc. It’s like the USSR died and moved here and took over the “Democratic” Party.

Using the word “could” is being very generous.

I used to live in Tim Ryan’s district. My grandfathers and step-grandfather all worked in the steel mills of Youngstown. My dad and his brothers have almost all worked in the automotive industry there. All that is dead now. No more industry. Drugs are rampant, houses are in decline. The industries of old that Democrats used to prop up are gone. The service industry is all that remains. Nobody that I know there is talking about or concerned with impeachment or phone calls to Ukraine. They care about keeping the job they have and keeping their local economy going. I predict the Democrats will lose Mahoning County in 2020. I hope they get rid or Ryan too.