CNN’s Chris Cuomo said his pronouns were “she, her, and hers” — and progressive hell broke loose

CNN’s Chris Cuomo said his pronouns were “she, her, and hers” — and progressive hell broke loose

Cuomo apologized, but for what? 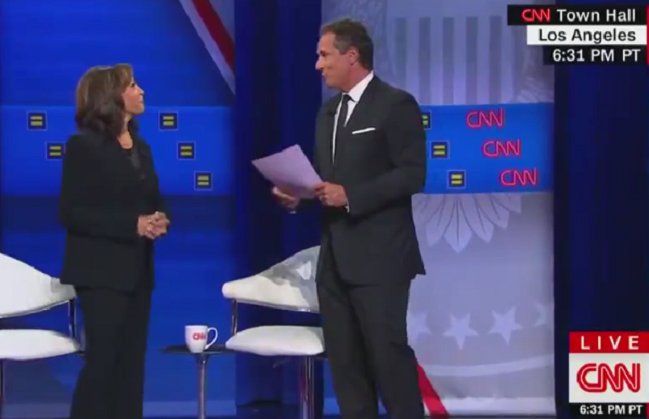 Earlier this week, CNN hosted an LGBT+ town hall, at which candidates promised to strip the constitution of freedom of religion and speech, among other things.

CNN host Chris Cuomo introduced Democrat presidential candidate Sen. Kamala Harris (D-CA), and when she listed her “gender identification pronouns” as “she, her, and hers.” Cuomo responded, “mine too.”

Cuomo was welcoming Sen. Kamala Harris onstage in Los Angeles when the 2020 Democratic candidate told him, “My pronouns are she, her, and hers.”

“She, her and hers? Mine too,” Cuomo replied with a smile, eliciting audible groans from the audience.

Cuomo was quickly roasted on social media over the gaffe.

“Dear @ChrisCuomo, people’s pronouns are not a punchline,” the National Center for Lesbian Rights tweeted.

“In a year where LGBTQ Americans are finally being recognized on the national Presidential stage, making jokes about gender pronouns is beneath your dignity. Please do better in the future.”

KAMALA HARRIS: My pronouns are she, her and hers.

CHRIS CUOMO: Mine, too.

This video lays out the perceived problem that some in the LGBT+ community had with Cuomo’s “mine too” line:

The charge against Cuomo appears to be that he was “insensitive.”

Cuomo’s sin, however, is likely not “insensitivity.” Either he believed those were his pronouns, in which case he would be celebrated on any campus. Or he wasn’t paying attention (most likely), in which case he meant no offense. Or, as some people interpreted it, his sin was making a joke at the expense of the left’s construction of gender identity.

When called out for making an inappropriate joke, Cuomo didn’t even bother defending his choice here. Instead, he dutifully went directly to social media mob jail, did not collect his $200 in progressive cred, and groveled  for forgiveness.

PLEASE READ: When Sen. Harris said her pronouns were she her and her’s, I said mine too. I should not have. I apologize. I am an ally of the LGBTQ community, and I am sorry because I am committed to helping us achieve equality. Thank you for watching our townhall.

PLEASE READ: When Sen. Harris said her pronouns were she her and her's, I said mine too. I should not have. I apologize. I am an ally of the LGBTQ community, and I am sorry because I am committed to helping us achieve equality. Thank you for watching our townhall.

For what exactly was Cuomo apologizing?

Another question in all this: How long before they come for Harris?  She has some intersectionality cred, after all, but she didn’t push back against this purported horrific insensitivity. Instead, Harris said, “All right!” and moved on as if the entire foundation of freedom and democracy hadn’t just been compromised by a white cis male corporate media personality.

I guess I’m a Neanderthal,
I just don’t get it. What they were talking about and what he said wrong.
Or any of it.

Everything now centers on identity and form that you get your intersectionality. He’s is a privileged white male so he can’t identify and female. He is the second-lowest rung on the intersectionality ladder. The only run lower than white, Christian males is white Christian conservative males. To your point NO it doesn’t make sense its LIBERALISM.

Are you a Neanderthal, or do you just “identify” as one.

It’s tough being a rational thinking, mostly normal, patriotic American, isn’t it? Not being a trained psychotherapist, I find it impossible to understand the left’s insanity. I do like the way President Trump deals with it though!

Cuomo proves again that his his name IS FREDO!

His pronoun should be FREDO.

Understandable, the confusion is progressive. Cuomo is a he, him, and his. Not even an edge case.

If I were to list pronouns, they would be She and It.

Then there’s
https://nonbinary.wiki/wiki/English_neutral_pronouns
Watch Xirself.
A major tech site is having a SJW meltdown over compelling the use of someone’s preferred pronouns.
(they haven’t said if Majesty/AttackHelicopter will be included but say that everyone has the “right to self-identify”).

Gendered language, clothes, sports, etc. to construct a favorable juxtaposition of the sexes.

[Rhetorical question] If “gender neutral” pronouns are called for, why are there so many? If the point is to be neutral, it seems that you’d only need one.

And we already have one: it.

The NKVD still comes for the Old Bolsheviks no matter how much they profess their loyalty to the Party and State.

Just ask if they identify as sane or crazy. It isn’t that hard, really. And the crazy ones self-identify every time that they open their mouths.

How dare you folks make fun of Cuomo! Please allow Chris to claim the appropriate gender and associated pronouns. (Just a big p#$$y anyway. And I apologize to any who are offended by my use of the term. My pronoun is She/he/it pronounced as a single syllable please.)

Heh, I see what you did there.

My prefered pronouns are Sir, Master and Daddy.

Well said! Occasionally a ‘Big Daddy’ can be heard?

Kind of ironic for a gut who can’t take a joke.

Normal people see this as insanity. They may go along quietly with this stupidity because in some places it can lead to legal consequences for you should you use the wrong word to address these mentally ill people.
I am glad this twerp is getting hammered for this, only because he is always saying crap and lying about anything to do with Trump, so let them roast him, he deserves it, even if it’s about this stupidity.
Our founders would be organizing a revolution if there were here today. This is out of control absurdity, this isn’t freedom, it’s tyrany.

My pronouns are F-k you

“Dear @ChrisCuomo, people’s pronouns are not a punchline,” the National Center for Lesbian Rights tweeted.

No, that’s exactly what they are. But to a really bad joke.

My pronouns for all transgendered and sexually ambiguous persons are “it, its, and its”.

I think “it, it and its” (subject, direct or indirect object, possessive)

The Left lacks a sense of humor – along with fairness, justice, proportion and, paradoxically, history.
I though the quip was actually quite funny – but Senator Harris is both self-absorbed and takes herself way too seriously.

At least it’s easy to pick sides; I hope they both lose, bigly.

Can we get #MineToo trending on Twitter, in Fredo’s honor?

People ought to list hair color, blonde or blond, brunette or brunet, since those are still inflected for gender indentification.

Even when you are one of “them”, you can’t avoid finding yourself mired in their “war of pronouns” swamp. Why don’t we just ban all languages entirely? If we aren’t going to use them to communicate intelligently and efficiently, then what is their purpose other than to further enslave us to this chaotic insanity? Are there any sane grownups left in the leadership class?

“Cuomo apologized, but for what?”

He was going to punch someone out as he usually does but then figured he might apologize this time.

“My pronouns are she, her, and hers.”

It takes a woman to do chris cuomo’s job.

Did you catch it?

Chris Cuomo writes, speaking of the LGBTQ community “I am committed to helping us achieve equality.”

So apparently he’s a member of the LGBTQ community.

Eff the Left and their special language,if they don’t like it they can pack up their toys and the hell away.

As for Harris, this is the same fascist who, along with sixteen other Democrap state attorneys general, tried to use the RICO statutes against so-called “climate deniers.” and is now”considering banning meat.