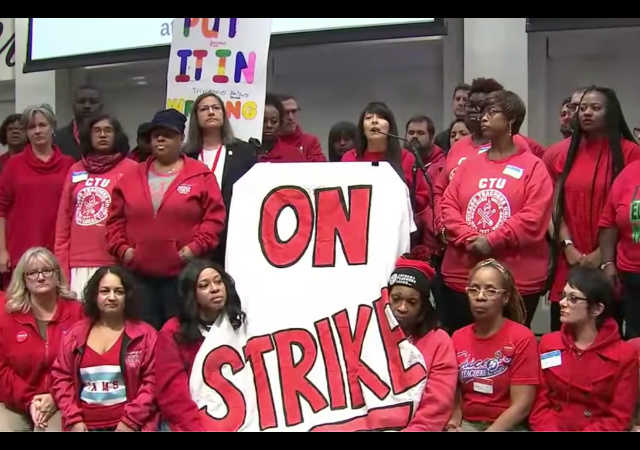 The Chicago Teachers Union (CTU) decided to strike, which began today after the union’s House of Delegates turned down the latest offer from the Board of Education.

In order to help parents with the students, the Board of Education allowed schools to remain open with principals and non-union staff. The students have access to breakfast, lunch, and dinners.

Illinois’ laws limit teachers to strike “over pay and compensation issues.” The union has a laundry list of demands:

Affordable housing has become a popular subject when it comes to the bargaining table:

Increasingly in today’s economy though, housing, social justice and other quality of life issues will be negotiating points in contract talks, according to Robert Bruno, a professor of labor and employment at the University of Illinois, Urbana-Champaign. “It seems like school districts are beginning to see housing affordability as a piece of the puzzle to make their school districts attractive,” he said.

More often though, affordable housing for teachers and other school employees is an issue dealt with at the policy level, with local and state governments dedicating funding to housing.

Barbara Raphoon, a certified school nurse, told The Chicago Tribune she shares her services with four schools. The school district assigned her to six schools in 2018:

“These kids are sick,” Raphoon said of her patients as she stood in a picket line outside CPS headquarters Thursday. “A lot of them have chronic illnesses. Diabetes, seizures, medications, ADHD. We just got one in with post-traumatic stress. She’s a kindergartner.

“It’s a lot. These kids need somebody.”

Mayor Lori Lightfoot has hopes the two sides can reach an agreement soon. The union has “something in writing about class size,” but CTU President Jesse Sharkey does not think an agreement will happen today:

“Details matter here. It’s about adequacy, it’s about if we can provide relief in the places that need relief. I think what you saw in schools across the city (today) is that teachers have been taking a hard swallow. That comes when you see something that’s wrong and you just can’t do anything about it,” Sharkey said.

Sharkey said he thinks something meaningful can be done Thursday evening but said it’s highly unlikely there will be a deal done by end of the day.“We’re going to work for the rest of the day,” he said. He also mentioned that they will likely not bargain through the night, calling it “not a productive use of time.”

The negotiations between the city and CTU ended just in time for the planned protest throughout the city. Teachers and supporters gathered outside of the Chicago Public School headquarters.

Madison closed between Dearborn and State for CTU strike pic.twitter.com/sGxmADCXCZ

Students, parents, and teachers chant “let us march” at the #CTUstrike pic.twitter.com/sJnN49YflH

Sharkey acknowledges some teachers are scared about not receiving a paycheck #CTUstrike pic.twitter.com/gv910pIr7n

Sharkey acknowledges some teachers do not want to miss a paycheck. But what if a teacher crosses the picket line? The CTU will treat them as a disease:

But if that were to happen, the Chicago Teachers Union has rules about the potential consequences for so-called scabs. Someone who crosses a picket line could face “appropriate charges” by the CTU executive board and then go through a judicial process akin to a trial. If found guilty, scabs could be fined, or even expelled.

Under the bylaws of the Service Employees International Union Local 73, which represents striking CPS support staff, strikebreaking and “gross disloyalty or conduct unbecoming a member” are among 11 chargeable offenses.

Teachers do not have to join a union in order to keep their job. TeacherFreedom.org has information to help teachers leave the union.

Message to Chicago taxpayers, get out while you can. The city is teaching a new generation of Bolshevics.

Training for antifa and BLM marches. No wonder the violence in Chicago is so bad if this is what the education workforce looks like.

The best thing that could happen is activate the Idaho and Maine reserves and declare martial law in Chicago for the next 9 months, from 5pm until 7am every day of the week. Break the backs of the organized rioters and unions while turning this lawless city into a law abiding city.

I can’t imagine sending a child into the hands of the gang shown in the top picture.

Ever see a picture of one of that teachers union’s recent presidents, one Karen Lewis?

She represents everything about the greed, and girth, of unions and government.

time for vouchers and and charter schools

CTU endorsed Toni Preckwinkle for mayor. Lori Lightfoot won every ward. Sour grapes is part of this. Other demands include a 30-minute prep period at the start of the school day that cannot be used for other things like meetings, banking bereavement pay if a death in the family occurs on a school holiday, removing the requirement that teachers produce a doctor’s note if they are out sick more than three days, and unlimited carryover of unused sick days that accrue toward a pension.

Because tenured elementary school teachers really need that 30 minutes at the start of the day, asking to prove you are actually sick is unfair, and everyone should be able to pad their pension at the public trough.

Just one more reason that CNN has a major presence in the “Windy City.”

“Oh, So That’s Why CNN Doesn’t Cover Shootings In Places Like Chicago”

Now that the Chicago teachers are on strike, maybe the kids will actually learn something just watching TV all day! It would have to be better than the crap the NEA is putting out!

– Chicago’s debt rating is at the junk level already.

– The city cannot turn to the state for assistance because the state of Illinois is essentially bankrupt as well. The state’s unfunded pension liability stood at $135B in mid 2018.

– Keep in mind that these unfunded liabilities have exploded during a time when we have had an historic bull market in equities and bonds. Were we to experience another shock the problems will only get radically worse.

– In addition, as of 2018, Illinois had an additional $73B in unfunded future healthcare obligations to its retirees bringing the total unfunded mess to well over $200B.

Bottom line is that Democrat politicians in the state have bought union support for decades by making promises related to retirement benefits that the state simply cannot live up to yet here are the teachers asking for more… more money, more health care, more retirement benefits. They are hopelessly out of touch.

Why anyone would choose to live there is beyond comprehension. IL is a train wreck (and the weather sucks too).

Chicago is also the poster child for the decimation wrought by Democrat policies on urban families. 83% of the city’s school children live in a home getting public aid or receive subsidized of free lunches. Most school children can also get free breakfast at Chicagos schools.

This is what happens when the state subsumes the role that should be fulfilled by parents. It is only getting worse and God help us if one of those nuts on stage the other night becomes President.

The CTU is hard core communist. They don’t care about anyone, not even the students. What they care about is how much they can plunder from the tax payers.

Yet is they ever got Communism, they wouldn’t get a thin dime extra. SMH. They want more and more, with less accountability, and don’t see they go against the very tenants of the government system they want.

A CTU delegation visited Venezuela recently, and on its return it praised that Communist regime.

This is pretty comical when their gods, the Democrats, are running on greed and wanting to “level” the playing field so all get the same.
Think about how twisted the mind has to be to convince yourself that all the contradictions of the leftists views are compatible.
If the parents start home schooling their kids they might actually find out that their children learn far better and can be taught critical skills that the education system has abandoned for indoctrination.
Looking at those “educators” is depressing, they look more like a shot of People of Walmart than educators.

I agree with you, but given the stats stated above, I doubt the parent has the ability to home school them selves

one condition the city should make, if they have children they attend the public school system, that might change things

Rahm appeased the Chicago Teachers Union by giving them raises and concessions that the city couldn’t afford and look what that bought for Chicago–ridiculous and unsustainable demands by the union, including a demand that the school system assist teachers in buying home–when there are lots of private citizens that cannot afford to buy a home, or are losing them due to the high property taxes.

Praise God, the children have obtained a brief reprieve from the ignorance of their school system.

Better that the schools should take a one year moratorium while they bring in or out source education to non-union humans in a competitive market place.

Chicago is bankrupt, and the teachers want more money. Not very bright.

“These kids are sick,” Raphoon said of her patients as she stood in a picket line outside CPS headquarters Thursday. “A lot of them have chronic illnesses. Diabetes, seizures, medications, ADHD. We just got one in with post-traumatic stress. She’s a kindergartner.

“It’s a lot. These kids need somebody.”

How is any of this the responsibility of the schools? Start cutting here. We had a school nurse who bandaged you up when you skinned your knees playing at recess. Not one that would treat a kid for diabetes. This is ridiculous.

Fire them all if they don’t show up on Monday and start hiring replacements. The city, state and school district are broke and taxpayers such as myself are sick of paying these greed crazed idiots.
Mayor Lightfoot has been patient with them to the degree that their demands keep getting crazier. Time to take a stand Ms. Mayor. The schools are still open, kids have supervision and replacement academic activities will be planned so it will get easier by day to continue without the teachers who will be crying like babies after missing a paycheck or two.

Previous poster Massinsanity really nailed it as far as conditions in IL are financially. The public sector is killing private business to the extent that citizens are leaving in droves. We have more gov. taxing units in IL than any other state. IL will almost certainly lose at least one Congress critter after the census maybe two.
Rahm was part of the problem but at least he negotiated school closings, longer work day; the real problem was Richard Daley the younger. The man was an idiot. He let the unions do whatever they wanted and now Emmanuel and Lightfoot are paying the price.

If we do not prohibit teacher unions, every city and state in the country will go bankrupt

Plus, all they do is indoctrinate these kids with their left-wing propaganda.

This is just another ‘commie’ cell of propagandists. They are popping up almost everywhere.