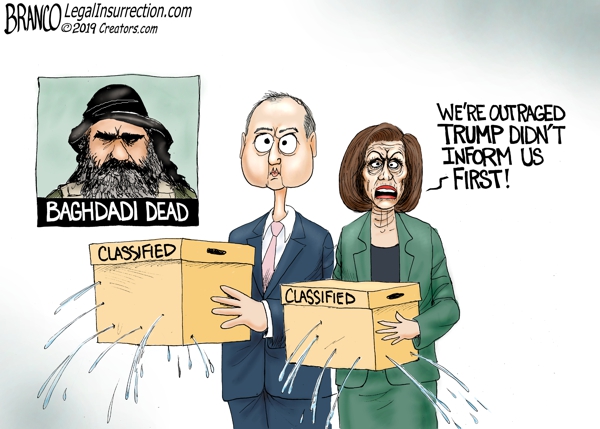 Because he trusts Democrats the least.

Trump stated, “A leak could have caused the death of all of them [referring to the troops used in the operation].”

Because the president is, by the express text of the Constitution, the C-in-C, Trump would be on solid ground arguing that the inherent authority of that text would negate (by virtue of the Supremacy Clause which expressly states that federal laws must be enacted pursuant to the Constitution) the federal statute that the lefties are claiming Trump ignored.

I am not sure whose side Nancy and company are on, so not letter her know was smart policy. I could see both her and Schiff-face leaking about the raid and then lamenting he got away.

Why should that hatefilled harpy be given a heads up anyway? There is no need for the Commander in Chief to do so, it wasn’t a declaration of war, it was a operation. Seems Nancy must have had some more Botox to the brain and thinks she is the president.

I am confused as well about whose side they are on. One thing I am crystal-clear on is which side they are against (the USA) and that is why I despise them so.

“I am not sure whose side Nancy and company are on…”

I’m not confused at all. They are on the other side, the side of any and all American enemies.

Trump learned the lesson of DC. The rest of us need to learn it too.

SPOT ON, Anytime US Forces are involved they shouldn’t tell ANYONE, period. Especially these dolts

It would be fun to choke him out with my thumb and forefinger.

Yup, letting them know beforehand would have been stupid. Their leaks would have either jeopardized the lives of the troops or gotten the mission scrubbed before it could be launched. Trump did the smart thing and only let those who absolutely needed to know for the mission to go forward.

notamemberofanyorganizedpolicital in reply to smalltownoklahoman. | October 28, 2019 at 3:04 pm

What is the “commission” the DEMS and RINOS get on weapons sales to the ME combatants and terrorists such as ISIS???????

I love my President!
Thank you President Trump for everything you do

Letting Schiff (for brains) know would be like announcing it to the world. Besides Schiff shouldn’t complain because he can add this high crime for impeachment.

Nancy was outraged that Trump didn’t inform her of the raid but did inform the Russians. That’s because they had to fly over Russian held territory and didn’t want to have the choppers shot down. If he had told her, they would have been shot down without a doubt.

Great cartoon Mr. Branco. Every new cartoon reminds me of why I am such a big fan. This cartoon perfectly answers the question of why Trump didn’t tell the Dems about the raid. They simply cannot be trusted. They simply leak.

Schiff and Pelosi are only outraged because this time the CIA went after al-Baghdadi, not the President.

Trump:
‘I Will Never Put The Needs Of Illegal Criminals Before … Law Abiding Citizens’…

Telegraph,telephone,tell the Commiecrats,they are the domestic enemy the founders warned of.

Democrats are not only un-American they are anti-American. Just look at their actions:
They will hold trials and prosecutions in secret. They will withhold information beneficial to the accused and leak only the information that they choose.

They want to eliminate the Bill of Rights, especially the First and Second amendments. These are just a few reasons to vote them out of office.