Who “won” the Israeli election? (we don’t know yet)

Who “won” the Israeli election? (we don’t know yet)

Exit polls predict Netanyahu will not be able to form a coalition government, but exit polls have been unreliable in the past.

This time around, the result may be the same. Based on exit polls, which have been wrong in the past, there is no clear ‘winner’ — keep in mind it’s not like here where one party gets a majority. In Israel, whoever is able to form a coalition of 61 Knesset seats is the winner, and that can take days or weeks.

Prime Minister Benjamin Netanyahu’s efforts to carry on after a decade in office with a historic victory in Tuesday’s election, and to be tasked with forming a government for the sixth time, remained up in the air late on Tuesday, after exit polls predicted a stalemate.

The final unofficial results were only expected on Wednesday afternoon, but according to exit polls on all three channels, neither Netanyahu nor Gantz had a clear path to a coalition.

Turnout in the race was 69.4% – higher than expected – even though Israelis went to the polls for the second time in five months. Arab turnout was up from 49% in the April 9 election.

According to Channel 13, Netanyahu’s right-wing bloc has a total of 54 seats, and the center-left bloc of Blue and White 58, including the Joint List. The other two polls gave the Center-Right bloc an advantage: 57-55 in Channel 12’s poll, and 56-54 in Channel 11’s. 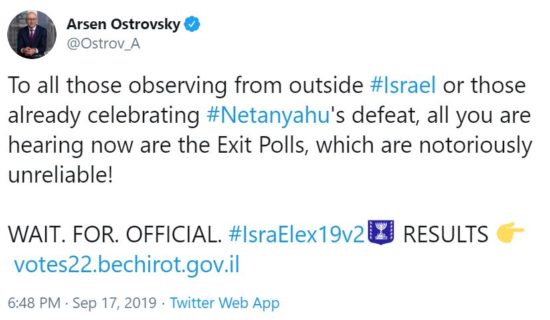 A Times of Israel analysis notes that Netanyahu has a history of over-performing in the actual vote, so it’s still possible he will emerge with a winning coalition.

#BREAKING: #Netanyahu tells supporters in speech that #Israel needs strong #Zionist gov’t to represent all parts of the nation as the #Jewish nation state, and can't rely on “anti-Zionist” #Arab parties. #IsraElex19v2 pic.twitter.com/IGrlWAYtNE

With 89.8 percent of votes having been counted by the Central Elections Committee, Benny Gantz’s centrist Blue and White party on Wednesday was projected to secure 32 seats in the Knesset, edging ahead of Prime Minister Benjamin Netanyahu’s Likud, which stood at 31 seats.

In the official count, the Gantz-led center-left-Arab bloc has a slight advantage over the Netanyahu-led right-religious bloc with 56 seats versus 55. In the middle are the nine seats of Yisrael Beytenu, whose leader, MK Avigdor Liberman, has vowed to force Likud and Blue and White into a unity government.

The Joint List, an alliance of mostly Arab parties, stands at third with 13 seats, followed by the ultra-Orthodox Shas and Yisrael Beytenu, both with nine seats.

Bringing up the rear are the ultra-Orthodox United Torah Judaism (8), the nationalist alliance Yamina (7), center-left Labor-Gesher (6) and the leftist Democratic Camp (5).

From https://knessetjeremy.com/ :Tuesday at 10 PM Israel time the voting will end and election will be over. Those who enter the polling station before 10 PM will still be allowed to vote. Each polling station will have a committee of three people, representing three different parties and those three people will tally the votes by hand. The party representatives will text the results to their headquarters so that the Party Leaders know the results before the television journalists. The official results will be entered into the computer and published on the Central Elections Committee website as the night goes on. Exit polls are closed at 8 PM and therefore will not include trends that affect the voting in the closing hours. The media focus will be on the exit polls until the middle of the night when a good percentage of the vote will have been counted.
So how can you conduct an exit poll before most people vote?

Magic! Crystal Balls! Leftist “Journalists” projecting their hopes over what will happen!

I pray for Israel I pray BiBi wins

I always put my money on the MIT guy.

I’ll put my shekel on the man with a plan to expand. Praying that I go Yahu! in the am.

“Polls have a history of under-estimating Netanyahu’s actual vote”

He’s not overperforming. As usual, the polls are just wrong.

Another caveat: A major factor in the final result will be whether Otzma manages to crawl over the 3.25% threshold. These projections are based on the assumption that it will not do so, and all its votes will be wasted. But if the actual count pushes it over the line then the picture changes dramatically, because that will give it 4 seats, some of which will probably be at the left’s expense.

One more point: The military vote, which tends to favor the right, is not counted until the next day; not only is it not included in the exit polls, it isn’t even included in the on-the-night actual count. So any projections made before it’s counted are inherently unreliable.

Sounds like it’s similar to ours with the military vote, and absentee voters… Our military has been excluded in a few races siting “irregularities” while other races magically “find” boxes of ballots not counted sitting in a warehouse or the trunk of a car.

This entire issue points to the fact that while the Israeli’s do a lot of things right, they have one of the most poorly structured governments in the world.

If you’re referring to the military vote, it’s done right, it’s just counted a day or two later than the other votes, and usually shifts the final outcome a little to the right.

I don’t follow the nuances of foreign political bodies

but how would a “unity” government look here?

like who would be the Isreal PM in this scenario?

looks like it would be a near 50/50 split regardless

which is worse than the previous tally

They would have to work it out between them. Generally there would be a rotation agreement, i.e. one of them becomes PM and agrees to resign in 2 years so the other one can take over. This agreement might or might not be carried out when the time comes.

PS: The “Blue and White” (Israeli for “Motherhood and Apple Pie”) coalition is already based on a rotation agreement between Benny Gantz and Yair Lapid. Had B&W been able to form a government without Likud, the agreement was that Gantz would be PM for 2 years and then Lapid would take his turn. How this would play out in a coalition with the Likud is anyone’s guess.

ok so by current projections:

these are the two big factions

but the remainders are

where do these seats fall?

Gantz’s camp is B&W (32), Labor (6), and Meretz (5), for 43. But the Arabs have 13, and Gantz made some worrying suggestions that he’d be open to a deal with them; they probably wouldn’t formally join the coalition but they’d support it from the outside in return for some powerful committee chairmanships. Or, who knows, he might even be so treasonous as to include them in the coalition and give them cabinet seats. I’m not sure I’d put it past him. And if he does so it would put him at 56.

Which leaves Lieberman with his 9 seats as kingmaker, and he’ll make the most of it. He wants a government without haredim, and so does Lapid. The haredim, for their part, won’t sit with Lapid.

Meanwhile Gantz insists that B&W is willing to join with Likud but not with Netanyahu. He says a condition of any deal would be for the Likud to dump Netanyahu and pick a new leader. So far everyone in the Likud is afraid to do anything but insist that they can have no other leader, but there are several potential leaders who are secretly hoping he goes but can’t say so.