Conservatives had cooked up plans to “field a candidate to stand against the Speaker in a forthcoming general election.” 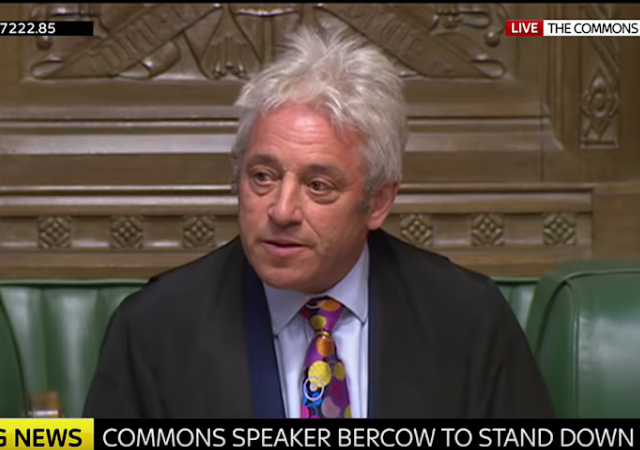 UK Speaker of the Commons John Bercow emotionally announced today that he would step down from his post by October 31, which is the Brexit deadline. He will step down immediately if parliament votes for an election tonight. From The Telegraph:

I would like to make a personal statement to the House. At the 2017 general election i [sic] promised my wife and children it would be my last. This is a pledge i [sic] intend to keep. If the house votes tonight for an early election my tenure as Speaker and MP will end when this Parliament ends.

If the House does not vote I have decided the least destructive course of action would be for me to stand down at the close of business, on Thursday, October 31.

Least disruptive because that day will fall shortly after the votes on the Queen’s Speech, expected on 21 and 22nd October. The week or so after that may be quite lively and it would be best to have an experienced figure in the chair for that short period.

Most democratic because it will mean that a ballot is held when all members have some knowledge of the candidates.

This is far preferable to a contest at the beginning of a Parliament when new MPs will not be similarly informed and may find themselves vulnerable to undue institutional influence.

Bercow has served as speaker for the last ten years when he took over from the late Michael Martin.

The London Times wrote that Bercow’s decision comes as a way to push the Labour Party “to not agree to an early election before October 31.”

Conservatives no longer hold a majority in Parliament. Labour leader Jeremy Corbyn will probably want to take the route that will allow this Parliament to choose the next speaker.

Bercow has come under intense “criticism from Brexiteers who have questioned his impartiality.”

The London Times reported on Sunday the plans of Conservative Members of Parliament (MP) to challenge Bercow. The Conservatives plan to back a candidate who supports Brexit.

MP Andrea Leadsom, who also serves as Secretary of State for Business, Energy, and Industrial Strategy, declared the Conservatives would “field a candidate to stand against the Speaker in a forthcoming general election.” From The London Times:

In an act of revenge by Downing Street Ms Leadsom said that her party had no choice but to contest John Bercow’s Buckingham seat for his role in the “flagrant abuse” of parliamentary process. Normally a sitting Speaker is not challenged by any of the main parties during an election. The move is particularly unusual because before being elected to the job Mr Bercow was a Conservative MP.

Ms Leadsom blamed Mr Bercow for allowing MPs to force through the extension bill last week against government policy, claiming that he was no longer impartial.

“The Speaker is in place to protect the constitution and oversee the behaviour of the House . . . but the Speaker failed us,” she wrote in the Mail on Sunday.

“The Speaker hasn’t just bent the rules, he has broken them. So it is right that the Conservatives will recognise this fact at the next general election by standing our candidate against him.”

Leadsom pointed out Bercow “allowing MPs to use Standing Order No 24, a procedure used to trigger emergency debates, as a means of taking over parliament’s timetable.” She insisted that the proposal to use the procedure “wasn’t appropriate for a motion.”

Leadsom cried out the decision came from the desire “to ram through legislation for purely political moves,” which could lead “to the creation of bad laws.” She also described it as a slap in the face to the people.

Bercow drew the ire of Conservatives last week when he took time out of his vacation “to claim the Government’s intention to prorogue Parliament was a ‘constitutional outrage.'”

The Telegraph then reported “Bercow had been collaborating with ant-Brexit MPs to thwart” plans to withdraw the UK from the EU no matter what kind of deal happens by the October 31 deadline.

Burning Down The House!

Ah, watch out, you might get what you’re after
Cool babies, strange, but not a stranger
I’m an ordinary guy
Burning down the house
Hold tight, wait till the party’s over
Hold tight, we’re in for nasty weather
There has got to be a way
Burning down the house
Here’s your ticket, pack your bags
Time for jumpin’ overboard
The transportation is here
Close enough, but not too far
Maybe you know where you are
Fightin’ fire with fire
Ah, all wet, yeah, you might need a raincoat
Shape down, dreams walking in broad daylight
Three hundred sixty-five degrees
Burning down the house, huh
Ah, it was once upon a place
Sometimes I listen to myself
Gonna come in first place
People on their way to work
And, baby, what did you expect
Gonna burst into flames
Ah
Burning…

At least they’re not pouncing.

He’s reportedly retiring to spend time on his hair and tie choices.

The UK Police must have reached the level of conficating combs in their disarmament crackdown given the appearance of so many MPs.

Look, there will either be a BREXIT by October 31, in which case any consequences for those who wish Britain enslaved by the EU are on the table, or there won’t. In which case, there will no longer be a Britain. Airstrip One perhaps, but not Britain, Great or otherwise. If Britain is to be free and sovereign in its own borders, it must be through the efforts of their own people. If they choose not to be, they join most past nations.

If Britain is gone, then we will have to realign our defense, trade, fiscal, and other policies considering our own benefit only, and not those of the EU and the congruent NATO.

To the Labour Party and their supposedly Conservative fellow totalitarians, consent of the governed, and being bound by a Constitution [as ephemeral as it is] or a Social Contract is mere bourgeois sentimentality that needs to be dealt with by corrective labour for the benefit of the State.

notamemberofanyorganizedpolicital in reply to Subotai Bahadur. | September 9, 2019 at 6:28 pm

There will be a Halloween Brexit.

EU can stand in as the dead body for the Halloween Party.

Remainers Plan to Replace Prime Minister with Unelected Civil Servant to Stop Brexit (Ha ha. Good luck with that when the EU member countries are already calling for an end of the EU’s games.)

RodFC in reply to notamemberofanyorganizedpolicital. | September 9, 2019 at 7:17 pm

Bercow always reminds me of a pug nose dog who is forever licking his privates and then looks around to see if anyone is watching.

Side note: what the hell is it with the English and their unkempt hair?

Bercow always makes me laugh. But from a freedom perspective, he does need to go.

Is there a shortage of combs and brushes in Britain? Or is there just a white hair guy thing?

Conservatives no longer hold a majority in Parliament.
Yes, but why? Because BoJo had the ability to kick them the heck out when they failed to uphold the party platform. The key is that Conservatives have the majority of votes in the nation, and BoJo is using that to pressure the gov’t into doing its duty by the people.

It certainly is nice to see people’s representatives actually fighting for their freedom.