A dull report, but remember consumer spending continues to grow. 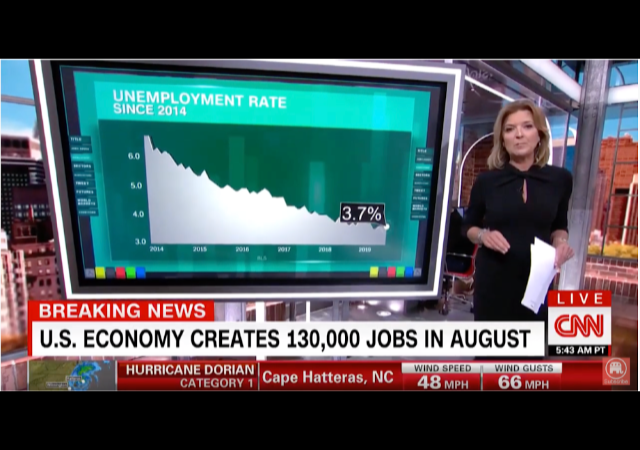 Yikes. The August jobs report is less than stellar as the economy only added 130,000 jobs in the month.

To make matters worse, a lot of those jobs were temporary jobs for the 2020 census.

But one jobs report should not cause a freakout. Unemployment remains at 3.7% while reports from earlier this week showed consumer spending continues to climb.

In order to fully understand the U.S. job market one has to look at the economy of the world as a whole. Manufacturing has slowed down in China, Germany, Japan, South Korea, and the United Kingdom.

This has led to a global slowdown, which has affected the U.S. economy. The manufacturing sector remains weak as it only added 3,000 jobs in August.

However, other sectors grew so the slow manufacturing growth has not spread to other parts of the economy just yet. From The Wall Street Journal:

In August, employers added jobs in health care, finance and leisure and hospitality. Government payrolls grew by 34,000, receiving a boost from the hiring of temporary workers for the 2020 census.

The labor-force participation rate or the share of Americans working or seeking work, ticked up to 63.2% in August from 63% in July. The pickup in participation indicates employers are pulling in people from the sidelines to fuel the economy.

Meanwhile, average weekly hours ticked up in August to 34.4 after declining in July.

The 3.7% unemployment is good. Plus, unemployment among minorities continues to tick down. Unemployment for black women hit an all-time low at 4.4%.

But broad measure of unemployment went up after “an almost-19-year low in July.” 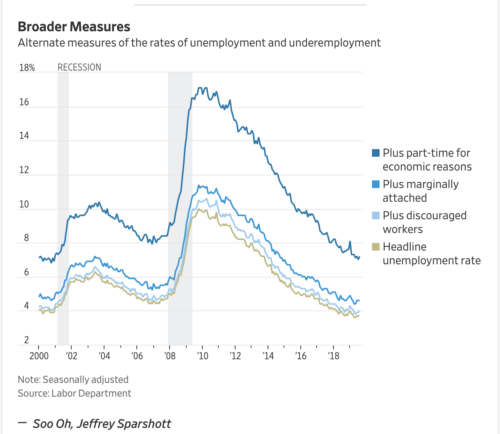 The participation of workers aged 16 and over provided a bright spot. The overall number hit the highest it’s been since 2008.

Mike Loewengart, vice president of E*Trade, told The Wall Street Journal that the report offers something for everyone:

“Unemployment remains consistent and hourly earnings ticked up, a move we haven’t seen in some time. And it’s below expectations and depressed enough to fuel the Fed’s drive to cut rates this month, so in some ways there is something to like for everyone,” Mr. Loewengart said.

“With surveys pointing unambiguously to much slower payroll growth over the next few months, the chance of a sustained rebound is slim,” he says in a note. “The trend is softening, as firms scale back hiring plans alongside capital spending, in the face of prolonged and deep uncertainty.”

Like I said earlier the consumer spending numbers helps to sort of negate a dull August jobs report. Consumers forget the power they have since we are a consumer-driven economy. Despite the slow wage growth people are still spending their money. From CNBC:

The report added to trade and inventory data in suggesting that while the economy was slowing, it was not losing altitude rapidly. A year-long trade war between Washington and China has spooked financial markets. The U.S. yield curve has inverted, stoking fears that the longest economic expansion in history was in danger of being interrupted by a recession.

I think we are starting to run into problems finding qualified people. There are jobs out there going wanting.

That reflects on the indoctrination system. Since we don’t educate anymore

notamemberofanyorganizedpolicital in reply to cucha. | September 6, 2019 at 4:52 pm

notamemberofanyorganizedpolicital in reply to cucha. | September 6, 2019 at 4:54 pm

Methinks there would be plenty of those if their welfare benefits were removed.

With employment at an all time high, there has to be a point where employee supply / demand becomes an issue. I don’t know if this is it- but I also think it matters where we are at when numbers like this happen.

That seems to be true from my point of view in the industrial sector. It is hard to find a millwright, welder, or diesel mechanic.

We have the people, but too many are in college wasting their time and money, instead of in trade schools.

notamemberofanyorganizedpolicital in reply to Close The Fed. | September 6, 2019 at 4:56 pm

the U3 math was changed under the regime so it’s worthless. the U6, however, hasn’t been this low since 2000

I live in a mid-sized university town in the Southwestern U.S. Almost every business in town has a “Help Wanted” sign in the front window. Most of these jobs are within the service industry, especially restaurants and retail. Fifty years ago when I was in college, students working to fund their education would be lined up to fill these openings. Today a large portion of students believe these types of jobs are beneath them and, as a result, several long-established businesses in the area have closed because they cannot find workers, or open only to close in a year or two. I read so much about the great job creation in this country, but what good are jobs if people don’t want to work?

RNJD, this is the problem with letting students finance their entire education. If loans etc weren’t so readily available, they’d do what I did, and work during school to pay the bills.

The loan/grant/uni systems LOVE this, even as it misleads our young adults into schools they shouldn’t be in, taking loans they won’t pay back, missing out on opportunities far more suitable to a better life.

It’s not just the students, it’s the parents. I have three in college and they have applied for student loans. The Subsidized and UN-Subsidized loans are not enough to pay for college. The students also have to get Parent Plus loans, which can only be given to the parents and must be paid by the parents.

So, in a market where the government will give away easy money, there is no incentive to having the student work. I, on the other hand, have only taken out very small Parent Plus loans, and have required my kids to work to make up the difference.

While they complain about having to work to pay a portion of their education, it gives them an incentive to get good grades and be “in school “ and not “at school.” Any grade below a B gets a 25% reduction in my assistance. Also, no BS (that’s bullschiff) classes or degrees. No “studies” classes. One is in Med School, one is in Law School after working for three years, and one is an Aerospace Engineer major.

Mary is ready for CNN. Yikes.

When you pour water out of a bucket the flow is tremendous at first but as the water level diminishes the flow becomes less. Is that too hard to understand? When Trump came to office he and Congress cut taxes and regulations to help businesses. They began hiring many millions of new workers and many of the best jobs have been filled. Now only lessor jobs are available and the hiring rate has dropped. What exactly does this mean Mary?

It is impossible to find qualified people. You put out a job opening for Technical Project Managers and get grocery store clerks (no offense to store clerks). Finding qualified people is damn near impossible because everyone is employed. The only way to get qualified folks is attract them away by a better commute, $$ or other bene’s.

true to some extent, but there are just as many businesses that don’t want to invest in internal training programs so they can promote from within for the more skilled jobs, instead they would rather poach from somebody else.

In a tight market for skilled labor a business needs to adapt to train and develop their entry-level employees.

Better yet, future employees need to take on entry level jobs to learn skills, seek training or vocational skills, and then make themselves employable at the next level.

Why should a business owner shoulder the burden of paying to train employees, other than for the specifics of the job the employee was qualified and hired to do?

If they want training, I suggest joining the military.

“Private employers added 195,000 jobs in August, according to the latest ADP National Employment Report, surging past analyst expectations of 149,000 even as recession fears continue to mount.”

No. Mary Chastain is auditioning for CNN.

AND consumer confidence which is almost as important.

Especially with Fake Business news pushing a recession. If things are slowing up, blame Germany. They’re the one dragging the whole system down.

Guess those migrants weren’t worth it, huh Frau Merkel?

Frau Führer Merkel and her Fourth Reich of non-European invaders.

notamemberofanyorganizedpolicital in reply to BerettaTomcat. | September 6, 2019 at 5:03 pm

Yeah, Germany has “invaded” and conquered all of Europe again, this time including the UK.

That’s still 130,000 more jobs than what Barry created in his entire 8 year reign of error.

notamemberofanyorganizedpolicital in reply to mailman. | September 6, 2019 at 5:04 pm

notamemberofanyorganizedpolicital in reply to AF_Chief_Master_Sgt. | September 6, 2019 at 5:04 pm

As I recall it, August is a transition month where job creation is lower naturally because of teenagers going back to college.

Why do you believe the numbers produce by the deep state that is out to get the President?