Trump Trolls California While Raking in $15 Million in Donations

Trump Trolls California While Raking in $15 Million in Donations 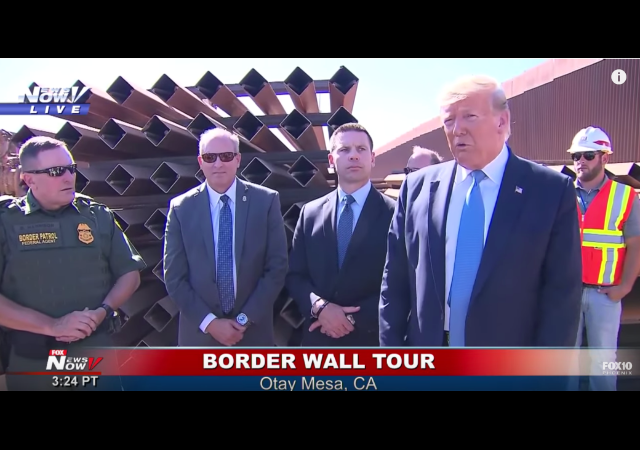 “I think Trump ought to start going to California. I think he ought to go there once a month. I think the Republican National Committee ought to schedule a debate in California,” Limbaugh said on his radio show. “I think the campaign should have ads showing and highlighting the homelessness in downtown Los Angeles and pointing out that this is what happens when Democrats run things with no opposition, no checks, no balances.”

The suggestions were golden. Trump visited the state and collected over $15 million in donations in a series of fundraisers held in the Bay Area, Los Angeles, and San Diego.

California has long been an ATM for politicians of both parties. But even so, Trump’s haul this week is expected to be eye-popping. At Tuesday’s secretive Portola Valley luncheon, where ticket prices ranged from $1,000 to $100,000 and attendees were whisked to an undisclosed luncheon by shuttle, Trump raked in $3 million. Later that night, at a Beverly Hills soiree hosted by billionaire developer and longtime Trump supporter Geoffrey Palmer, the president added another $4 million to his tally. On Wednesday, he’s expected to bring the trip’s grand total to $15 million with a Los Angeles breakfast and San Diego luncheon.

That’s $15 million in a single state in less than 24 hours. By comparison, Kamala Harris raised $11.8 million nationwide during the entire second quarter of 2019.

Since money is a crucial indicator of enthusiasm, the Democrats should be in full panic mode. California is the center of the #Resistance, the belly of the beast, the heart of liberal utopia. The fact that Trump drew so much financial support in such a short time is likely indicative that there is substantially more enthusiasm for him in this state that there was in 2016.

If that is, indeed, the case, what do the polling numbers look like in the remaining states?

Trump also made it a point to stop and check on San Diego’s border wall…and autographed the structure.

President Trump touted the effectiveness of newly-constructed barriers as he toured the U.S.-Mexico border near San Diego on Wednesday, insisting, “This wall can’t be climbed.”

…The president said it’s in one of the “most dangerous areas,” and they’ve built a “double wall” – one barrier was 18 feet, and the other was 30 feet. Before leaving, Trump used a marker to sign the wall.

And while in California, Trump took to Twitter to announce that the administration is revoking California’s authority to set strict fuel economy standards. 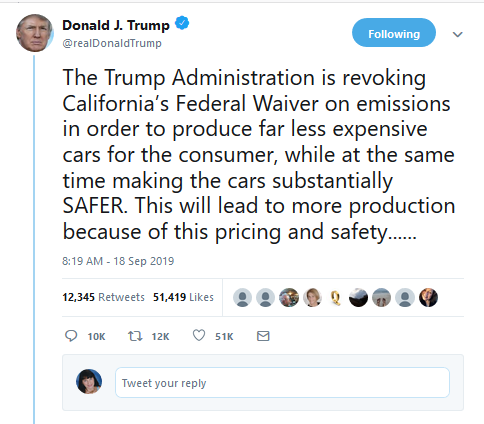 Trump announced the move Wednesday, saying the decision was made “in order to produce far less expensive cars for the consumer,” while making cars safer at the same time.

“This will lead to more production because of this pricing and safety advantage, and also due to the fact that older, highly polluting cars, will be replaced by new, extremely environmentally friendly cars,” Trump tweeted Wednesday morning.

Then, if all this exquisite trolling was not enough, the Trump administration rejected requests by California for more funding to address the homelessness crisis. He said the state’s policies caused the problem.

“Your letter seeks more Federal dollars for California from hardworking American taxpayers but fails to admit that your State and local policies have played a major role in creating the current crisis,” Carson wrote in a letter to Gov. Gavin Newsom and other officials.

In perhaps one of the most glorious moments of trolling ever, Trump threatened San Francisco with charges of environmental violations because of the homeless situation.

Too bad amid all their #Resist, anti-Trump virtue signaling, Governor Gavin Newsom and Attorney General Xavier Becerra did not consider working in good faith with the president.

Interestingly, Newsom is polling at 39% and facing a recall drive. It may be that Trump may end up more popular in the state than Sacramento’s leadership by the time November 2020 arrives.

“California trolling, in such a democratic state.”

notamemberofanyorganizedpolicital in reply to legacyrepublican. | September 20, 2019 at 5:06 pm

Maybe Dana Kamide can set that to the tune.

California is asking for more Federal money to deal with the homeless crisis? They don’t need more money. As someone said in a different context, there is plenty of money in California, its just in the wrong places. Like the pockets of the politicians and their public union masters.

I wish he’d do weekly visits to Seattle.

I will bet that the campaign would raise millions from an Eastside visit. There are a lot of people with money that have first hand knowledge of the utter failure of progressive policies in Washington state.

Trump took to Twitter to announce that the administration is revoking California’s authority to set strict fuel economy standards.

While they’re at it, perhaps they can revoke whatever silly regulation makes everybody put that California “the sky is falling” message on every known product, the one about the materials causing cancer. Maybe all known substances do cause cancer in California, but for the rest of us, not so much.

Walking into the men’s room and seeing signs about harmful chemicals that are present hurting the possible baby inside me always leaves me with a smile and a good laugh.

I am not sure how I can give that up.

Although, I see your point.

Manufacturers only “have to” inside Cali, but having one SKU for Cali and another for the rest of the country costs more money for just a cosmetic difference, so just about every major MF sticks to one SKU that works in every state.

Some of them are regional. I’ve seen warnings on stuff I never see when I’m visiting Georgia.

I never realized how batshit insane California had gotten until I walked into an Ace Hardware in NM to buy and extension cord and saw the cancer warning on it. I’m just plugging it in the wall, not stripping it down and eating the damned thing.

I have to say, in many ways I’m disappointed in Trump, but at the same time, he sure does rattle and roll the establishment and regulators. God bless him.

I can honestly say that one of my favorite things about Trump is his ability to troll The Left. It’s honestly brilliant to watch.

I love Trump doing this! Honestly what he is saying to California is considered blasphemy here in the Bay Area. It’s great!