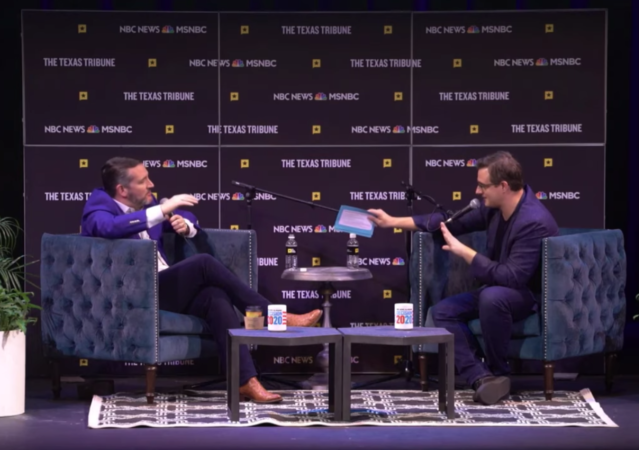 Sen. Ted Cruz joined MSNBC’s Chris Hayes at the Texas Tribune Festival on a stage sponsored by NBC. Hayes is as true a progressive as they come.

That said, I’ve never found him off-putting for the sheer reason that he is always willing to engage in mostly civil debate, a rarity these days.

Take for instance this exchange on climate change. Hayes continues to beat the “we’re all going to die!” climate alarm drum and Cruz simply tries to make the case for the fact that the data on the subject “are mixed”:

Gosh, Ted own this conservation.

With that grape-colored jacket and those kick-ass boots, Cruz was destined from the outset.

Follow this dude. I only found him a couple of weeks ago. From what I can tell, he only tweets about once a day. In every tweet so far he has highlighted a scientific study, or part of a study, that disputes the consensus view about climate change.

Chris Hayes is completely ignorant to the fact there is a huge amount of uncertainty among scientists with the alarmist’s hypothesis.

Scientists do not vote in order to arrive at a consensus. Neither the acceptance of a hypothesis nor a scientific theory is established by a vote.

“Whenever you hear the consensus of scientists agrees on something or other, reach for your wallet, because you’re being had.” — Michael Crichton

As a young copilot flying up and down the East Coast, I remember the Potomac river freezing from Norfolk all the way to Baltimore. And it stayed frozen from Dec 1976 untl Feb 1977. They had to use ice breakers to get boat traffic from the Atlantic to Baltimore. Time magazine went crazy with predictions of an ice age. All the scientists were predicting an ice age with dire consequences. However, there was no AGW or manmade pollution to blame it on so it was just mother nature. Now we have a period of warming that actually stopped 22 years ago but the “Consensus” of “Scientists” is that we are doomed in 10 years because of AGW. I wonder if we would still be doomed if they didn’t have something to blame it on?

They deny that now. They claim that the entire “global cooling” scare that we all remember never happened, that it was just one stupid piece in Readers Digest and never had any support from scientists. But that’s not how I remember it.

The “data” the alarmists use has been repeatedly proven to be a complete fraud.

They’ve simply changed the data to invent the crisis.

NOAA’s fraud was discovered simply by comparing the charts that they had published prior to 1999 with those published since. LOL!

The East Anglia database fraud was the center of the “climategate” email bombshell that clowns like Hayes are, still, completely in denial ever happened. What East Anglia did was even worse than what NOAA did – not only did they go back and lower the temps for all of their older data and raise the temps for the newer data, but they also DESTROYED the entire original dataset and kept no record of the modifications made to it – so it can’t be reconstructed.

New Zealand’s global database was similarly found to have been thoroughly modified to invent the warming.

Here’s a protip: If your theory is scientifically sound, the actual data will prove it for you. If you keep getting caught hacking the dataset, that’s all anyone ever needs to know to understand that your theory is crap.

Democrats fell asleep in school when we were taught about the carbon cycle. Ever notice how they never mention that CO2 is plant food? Why do they hate plants? I thought they were vegetarian?

Debates, if this could be called one, like this drive me crazy.
>
A minor reason is how Hayes asks a question and if Cruz does not immediately agree, then Hayes, not wanting to hear any logic or reasoning, comes out attacking him. Simple schoolyard bullying tactics.
>
A far greater reason for my frustration, however, is that in these debates the important questions are never asked. Yes, it is abundantly clear that CO2 is a greenhouse gas and that adding more of it to the atmosphere is going to alter the climate. Who cares for that is not the important concept or question. The critical question is “How much?”. A scientist knows that altering the climate is a given as CO2 increases so they never bother to ask that question and is the reason why they always answer in the affirmative when asked. What scientists do care about is how much does this all affect the climate. If it is 0.000001%, then who cares for the effect is trivial, but if it is 90%, then there is something to worry about. Currently, we simply do not know how great the effect on the climate adding some CO2 is although it is appearing to be far less than originally thought such that now it appears to be largely inconsequential.
>
With people like Hayes demanding we view CO2 and the evil bogey man of climate change, they assume that we must do something about it. Absent from their or most anyone else’s analysis is how much CO2 is considered safe and how is “safe” defined? IF we go below around 200 ppm (current levels are around 420 ppm) then plants starve to death and we all die. I think we could all consider that a failed goal. So how much should be our goal? This is important because we must no only know what our goal is but why and how did we arrive at this for our goal. Who talks about this? No one and what they all miss when they ignore this question is how do we ever know when we attain success? Without a goal, then we are left without an endpoint with all the obvious ramifications that goes with this.
>
Another concept missing is a cost benefit ratio. How much would it cost us to implement CO2 controls to reduce CO2 levels to our defined goal? These costs are far more than just money because they must include other issues such as quality of life, etc. Likewise, we must understand the cost of doing nothing. This cost could be bad in terms of worse quality of life, destruction of land from rising seas (which are not rising, ask Obama), etc, or they could be positive in terms of increased crop yields that will increase our ability to feed ourselves, reducing the size of deserts (already occurring), etc.
>
In the future, could we please have a debate where the right questions are asked or is that asking too much?

That changing CO2 levels will alter the climate may *not* actually be a “given”.

I’ve seen one theory, which seems to have reasonable data to back it up, suggesting that changes in the climate are the cause of, rather than the reaction to, changes in CO2 levels.

Not to mention that water vapor is now believed to be a “greenhouse gas” with far greater impact on the Earth than CO2.

There have been ice ages, there have been heat ages, all before man walked the earth. As Captain Kirk would say, “Spock, explain…”.

How will the government institutions recover from their data fraud if the lack of current sunspots in these cycles actually bring another Maunder minimum? Because politicians believe they can get quick riches from the climate crisis scare, it seems nobody is looking long term. Is it they will make their millions and get out before anyone catches on? Like everything else political, I have no answers.

A debate is when two people are allowed to make their point. Hayes never shuts his mouth long enough for Cruz to make a complete statement. Then he tries to get Cruz to disagree with Crenshaw – another old Dem trick.

Hayes was well aware from the gitgo that if he shut up and let Cruz talk Hayes would be schooled like he’s never been schooled before. If there is one thing everyone should agree on it’s that Ted Cruz is scary smart. Hayes had no choice but to keep babbling. And still Cruz won.