“William Jacobson is a leading critic of the academic boycott of Israel and the anti-Zionist boycott, divestment, and sanctions (BDS) campaign as a whole.” 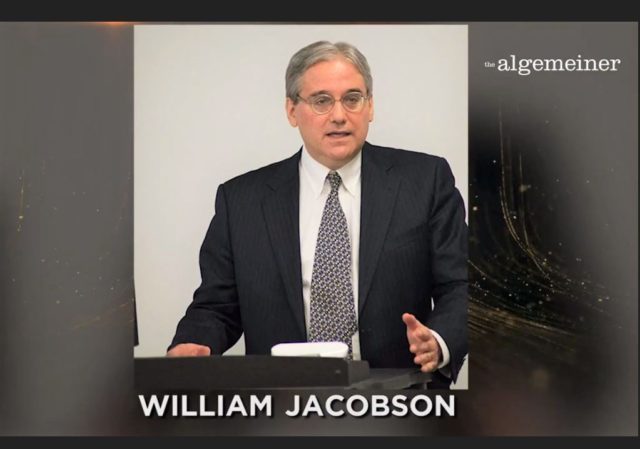 We also seek to inspire and motivate our young and the next generation, our future emerging leaders, in rising to the occasion and perpetuating the highest standards of our proud tradition and legacy – in serving and championing the cause of Jews and Israel. Because, as we know, when the quality of Jewish life is raised, the quality of all lives is raised. However, the most exciting part of our work in choosing the J100, frankly, was sifting through hundreds of candidates and nominees to discover some surprising finalists. It was a joy to see the breadth of all those who merited a mention, to understand some of the great work being performed around the world on behalf of the Jewish people, and to celebrate their victories by bringing this great work to renewed public attention via this endeavor.

The Algemeiner “was founded in 1972 by famed journalist Gershon Jacobson as Der Algemeiner Journal and was originally published in Yiddish.” It’s now one of a core of “Jewish” publications, but unlike some leftist publications like The Forward, it’s more moderate in its politics.

Here is the entry for Prof. Jacobson:

An American lawyer and scholar who is an expert in securities arbitration, William Jacobson is a leading critic of the academic boycott of Israel and the anti-Zionist boycott, divestment, and sanctions (BDS) campaign as a whole. Jacobson, who is on the faculty of Cornell University’s law school, is also the founder and publisher of Legal Insurrection, a conservative news blog. He frequently makes media appearances and speaks at events across the nation. Earlier this year at Cornell, the student government rejected a BDS resolution by a vote of 15-14, with one abstention. Jacobson responded, “The point of BDS on campuses is not actually the boycott, divestment or sanction itself. BDS is just a tactic to dominate campus life and energy in the cause of demonizing Israel.” 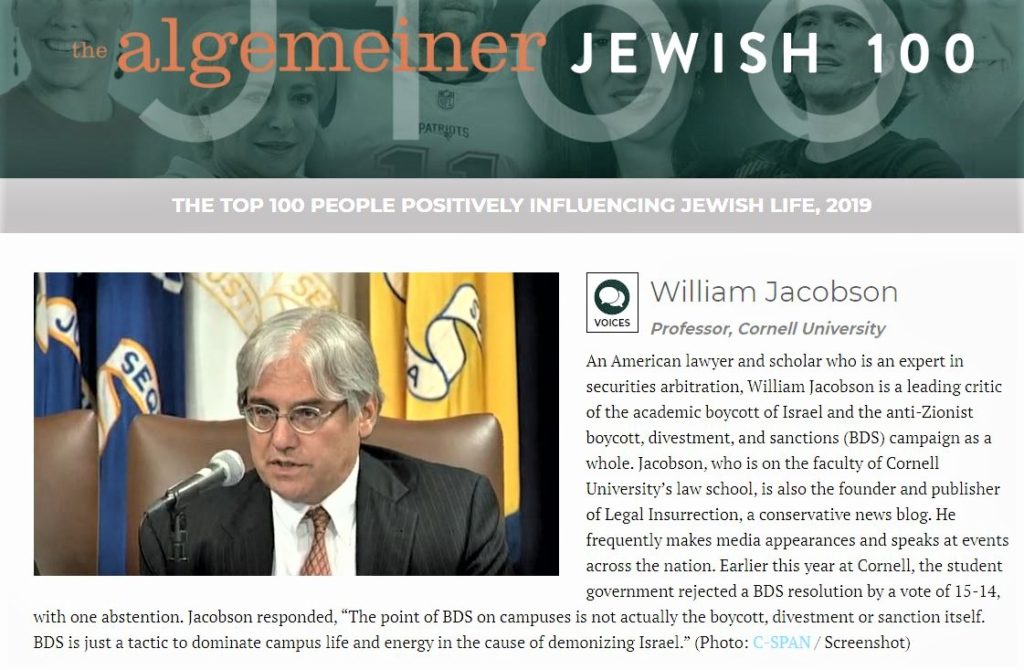 Prof. Jacobson’s honor is particularly impressive because there were only three other honorees from academia:

This is the second year in a row in which a leader of the Legal Insurrection team has been honored by the well-known Jewish newspaper, with Prof. Miriam Elman being named to the J100 list for 2018.

Congratulations to Prof. Jacobson for this exciting achievement.

Congratulations, professor. As deserved as deserved gets. All the best to you.

Hey! I know that guy!

This is long overdue. Congratulations, Professor.

He also influences one lapsed Methodist that I know of.

Jake Tapper. He’s a real prize. In another time and place he’d be a goosestepping oven-stuffer. Oh, is that too harsh? Overwrought hyperbole? No, it’s bloody not. He’s a nasty piece of work. His twitter feed is rife with bullying and fake news hit pieces. But he gets an award because Jewish? There is no ^$## justice in this world. None.

I’m now 10% more cynical and 12% more jaded after seeing Tapper elevated by people that consider themselves intellectuals. Why is it that a secular, blue collar Goy like me stands up for Jews when the very people I’m standing for hate me? Please, don’t say that the majority of American Jews don’t hate right wingers because saying such a thing would be patronizing and ridiculous.

It always comes off as tawdry and wholly incestuous when news organizations award themselves Medals of Honor.

“It always comes off as tawdry and wholly incestuous when news organizations award themselves Medals of Honor.”

Except for Brian Williams. His medals, all of them, were well deserved. I have heard the stories.

No, he doesn’t get an award because Jewish. A good quarter of the 100 listed are not Jewish.

Tapper is Jewish? A shonde for the goyim.

Congrats on your recognition -well deserved whether the others were or weren’t.

Congratulations! In my book, you’re in the top 10.

From a conservative Catholic in a partly blue state….

(note to readers: Oregon is conservative east of the Cascade Mountains)

Unfortunately, not too many people live there.

The man who steadfastly opposed Trump is now ranked with Trump amongst those most beneficially impacting global Jewish welfare. Ironic.

Extremely exciting, well-deserved and hopefully just the beginning for P.WJ.

he says:
“It is too small a thing for you to be my servant
to restore the tribes of Jacob
and bring back those of Israel I have kept.
I will also make you a light for the Gentiles,
that my salvation may reach to the ends of the earth.”

You. sir. are a light and without you it would be a dark world.

That is, of course, a reference to Jesus.

It is no such thing. The text is clear; Isaiah is writing in the first person about what God told him. He, Isaiah, was sent not only to prophesy to the Jews and induce them to return to God, but also to prophesy to the whole world about the future redemption, when the Jews finally will return to Him and be restored to their land.

I would hope and I pray that when I refer to the book of Isaiah, I am being clear that I am referring to more than Jesus.

Mazel tov, Professor! It’s nice to see you getting the recognition you deserve, although I know that that’s not why you do what you do.

Of course this is the Algemeiner. I can just imagine the conversation in the editorial conference room at the Forward; something along the lines of “A fascist rag gives an award to a fellow fascist”. Now when those damn commies recognize Prof J’s good work, that‘ll be news.

(PS: There was a brief period in the ’90s when the Forward was a decent paper. Then the commies noticed what was happening and took it back.)

Maybe some one will get the idea that I don’t respect Jews.

If that’s your view, I will gladly fight you to the death. With a song on my lips and a pair of Easter palms crossed over my heart. Because that is the furthest thing from the truth.

If I could manage it, I’d die in Israel.

Maybe some one will get the idea that I don’t respect Jews.

If that’s your view, I will gladly fight you to the death. With a song on my lips and a pair of Easter palms crossed over my heart. Because that is the furthest thing from the truth.

If I could manage it, I’d die in Israel.

How about living there instead? Everyone has to die some time, but there’s no need to do it any sooner than necessary.

OK, I can live. I doubt you care. You have no reason to. I grew up around the horrifically maimed and burned Sailors and Marines at the Oak Knoll Regional Medical center (My dad was a Coastie so I got Navy medical care) toward the tail end of the Vietnam war. The kind of guys whose own families turned on them, only asking if the disability checks would keep arriving in the mail.

They used to race each other down the Oakland hills just to remind each other they were still men.

I believe if I meet a nice Jewish girl in Israel we can go to Cyprus and get married.

Race each other in their wheelchairs after they lost their limbs.

Two books that left an impression on me were “Japanese Destroyer Captain” by Tameichi Hara and “I Boat Captain” By Zenji Orita. I won’t link to them. You can look them up. But I will link to a third book. And a fourth book.

See what I mean? Literally.

I appreciate the kind things some of you have said about me.

I bring them home alive.

Look at the mess someone made of the Belknap.

Here I was thinking the reason I loved boiler technicians (back before we had nukes) was they would rebrick the boilers and get a few more knots out of the boat.

I am so ancient.

You all should treasure me. I am a link to a past that none of you will ever experience.

I realize none of you are going to get this. But if you get your arm ripped off what you need at that moment is a friend who will shove a fist into the empty space where your arm used to be. And stop the bleeding.

I bet you think I’m making things up. Like I wasn’t ankles deep in blood when the Sailor forgot to put the safety pin in the hole and the watertight hatch came crashing down on his grape.

I used to joke, and I still joke, that the USN is an industrial accident waiting to happen.

“Daniel H. Johnson is a former assistant district attorney in Wake County, North Carolina and a veteran of the United States Navy who received the Navy and Marine Corps Medal for saving the life of a crewmate on the USS Blue Ridge in 1999. As a result of that incident, both of Johnson’s legs were amputated below the knee…

He saved a shipmate who got caught in an anchor chain.