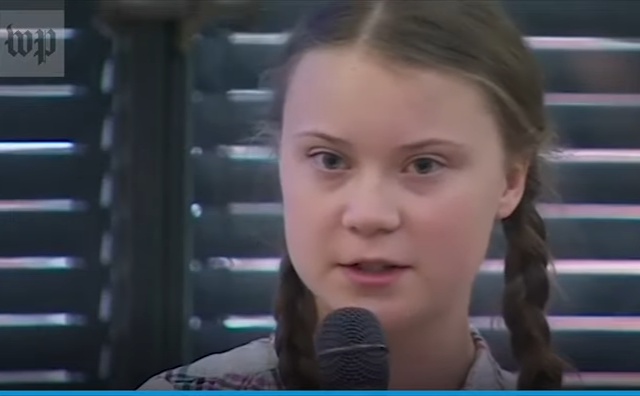 The New York City Department of Education is allowing school kids to skip classes next Friday to partake in a Manhattan “Climate Crisis” rally.

“TEN YEARS. We have ten years to save the planet,” Mayor Bill de Blasio cautioned in a tweet. “Today’s leaders are making decisions for our environment that our kids will have to live with. New York City stands with our young people. They’re our conscience. We support the 9/20 #ClimateStrike.”

Legions of adolescent activists across the globe are expected to demand immediate action to combat climate change in advance of a major UN conference on the issue next week.

As long as mom and dad sanction their principled truancy, absent kids won’t have attendance records dinged, the DOE said.

Teen activist and Swedish sensation Greta Thunberg, who recently docked her zero-emissions sailboat in New York, will speak at the event which will snake its way through lower Manhattan to Battery Park.

The infamous “Green New Deal” will be promoted as well.

The New York City climate strike is backed by more than 100 environmental and political activist groups and other institutions, including New York Communities for Change, The New School and the Sierra Club.

The protesters’ demands include a “Green New Deal” that would end fossil fuel extraction and move the nation onto entirely renewable energy sources by 2030. Green New Deal policies have been backed by the likes of U.S. Rep. Alexandria Ocasio-Cortez and Vermont Sen. Bernie Sanders.

Personally, if I were one of the kids, I might argue about going to school at all. After all, if the Earth only has 10 more years before we are going to die, wouldn’t it be better to spend the time having fun or spending quality time with family?

On the other hand, if the New York City school officials were really invested in solving the climate crisis, wouldn’t they emphasize science and math? Perhaps keeping the kids in school and having them conduct experiments or perform calculations would inspire an interest in real climate science.

One theory that seems to prove true and is certainly consistent with what is happening with the New York City schools: When global problems are emphasized by locals, serious local matters are being ignored.

Case in point: New York state test results for third- through eighth-grade public school students are out, and the results are underwhelming.

Think the problem’s skimpy funding? Sorry: In 2017, the Empire Center’s E.J. McMahon reported in May, New York shelled out 89% more per kid than the national average. And that gap has been growing fast: In 1997, per-pupil outlays here were just 45% above average.

…In the city Thursday, Mayor Bill de Blasio and Schools Chancellor Richard Carranza tried to spin the results positively. The pass rate in English, they noted, is up 0.7 percentage points — and three whole points in math.

“Growth counts for something,” Carranza insisted.

Huh? That paltry uptick is what they’re proud of? Even though more than half the kids bombed? Please.

Notably, kids in the one category of public schools de Blasio and Carranza (and their union pals) don’t run — i.e., the charters — beat their counterparts in the regular schools by more than 10 percentage points in both English and math.

At least the kids won’t be flying private jets to attend the event. That makes them substantially less hypocritical than the celebrities who will be indoctrinating them during the Manhattan event.

I liked the Vikings better when they were doing rape and pillage.

At Christmas I get a lot of Santa Claus remarks. I reply that I am in fact, a retired Viking. If I see a nearby female with an angry expression, I add that I had to retire because all I can do at my age is pillage.

I let her fill in “rape” in her own angry mind; I don’t say it. The results are always amusing.

We Vikings left Scandinavia over 100 years ago.

Well, it’s not like they are learning anything in school anyway. And it means one less day forced to go to a dungeon where they are bullied by other students and propagandized by teachers.

A few days away from communist hellholes like public schools and students might (GASP!) start to think for themselves.

You got it. I was going to say it.

I’d show up if they were giving out free Swedish meatballs. Love those things! But then again, the dims say eating meat is bad for the environment.

All the better reason to eat them. Annoying enviro-nuts is always a treat.

what a stellar example of terrible parenting

Other than being a 16-yr old mentally challenged young lady from Sweden who is obviously not attending primary school and who is obviously being used as a tool by her parents and those who stand to benefit the very most from her led-about efforts, what, exactly, are “climate sweetheart” Greta Thunberg’s education qualifications and expertise? What climate/physics related degrees does she hold? What expertise in thermodynamics does she hold? It is widely and breathlessly reported that, as a “climate activist”, 16-yr old Greta Thunberg is the preeminent “Greatest Threat to the World’s Fossil Fuel Industry”. How can she be a “threat” to any global industry when she can’t even fully care for herself due to her mental infirmity(s)?

Once again, as is oh-so often the case these days, it is an utterly false creation that is 100% contrived and manufactured by a cabal of self-serving miscreants with personal agenda’s that gathers opportunistic hanger-on’s as it rolls along that will benefit the most of all and be enriched the most of all and whom are once again leading America, and by extension the entire western world, around by the nose. And frankly, I am utterly sick and tired of these transparently false schemers with their snake-oil, and the willfully ignorant dullards who prostrate themselves before them. I am most definitely not buying what they are selling.

I hear that it has to be really important if kids are going to miss school for it. /S

I bet deBlasio doesn’t even show up, it likely be related to his job.

She’s a child. Children are pure. Therefore she is as pure as the children in Salem in 1692 and she is reading their script.

More demagoguery from the left with a different face for the cameras. It sure is sickening!

Interesting how this media event was ginned up.

Eco-fascists: “We’re all gonna DIE in ten years because of YOU malthusian malcontents!”

School children: “Is it any wonder some of our friends think suicide is an option?”

So now we have to find a 15-year-old to deliver the rebuttal?

ALF would qualify, even though I do know some fifteen year olds with more intelligence!

The district is promising the kids to have their own yatch.

Babes in spoiled-land. Gun-Hogg and she would be a match.

But of course the baby would have to be aborted.

This is pure leftist indoctrination, making leftist soldiers out of these poor kids, and destroying their futures.

We’ll be gone before it fully hits, but these kids – and their stupid parents – are being used by otherwise psycho politicians to gain power and loot the country.

Protect your 2A rights as if these psycho politicians want to enslave you, and will do it by any means necessary.

Laughing my ass off. They have no clue how many “emissions” it takes to build a sailboat.

They’re all liars and frauds.

All those kids would be better off if they stayed out of school every day.

Wait, didn’t we all die in the 1980’s from over population and “global cooling”?

The Globalists are panicking.

Their decades CON JOB to steal wealth is being uncovered.

They’ve been using the “climates change” scare since the 1930s as their SCAM!

When we are still here in 10 years will they shut up?

It’s really nice to encounter an optimist. Thanks!

Never will they shut up! Results are never examined in their endless journey to the mythical Utopia. Their intentions, if looked at closely, are cloaked behind flowery Marxist pap. Thus, the intentions of the left are no better than their mostly predictable consequences.

I guess only those on the right see the consequences as unintended.

More indoctrination of our youth

Missing a day from the New York City public schools is no loss.