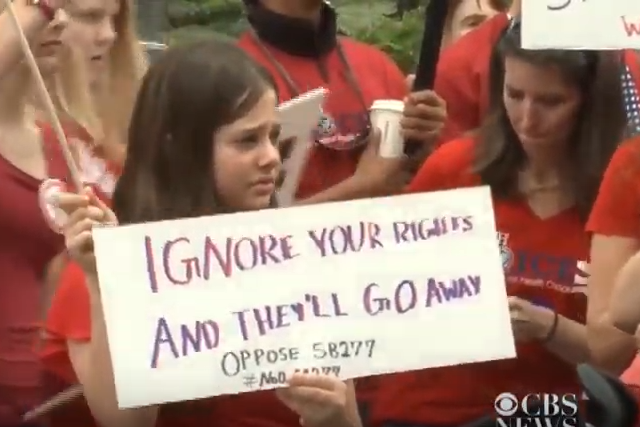 The California Senate had to stop their session Friday evening after an anti-vaccine protester allegedly threw a red liquid from the upstairs gallery onto the legislative floor.

Some of the liquid landed on desks.

The Senate chambers were closed for hours as the California Highway Patrol did its investigation. A woman was arrested.

People who were inside the chambers when the red liquid was thrown from the upstairs gallery say the woman shouted something about dead babies before tossing the liquid onto the senate floor.

One senator posted a picture on Twitter showing the liquid was thrown from a menstrual cup. 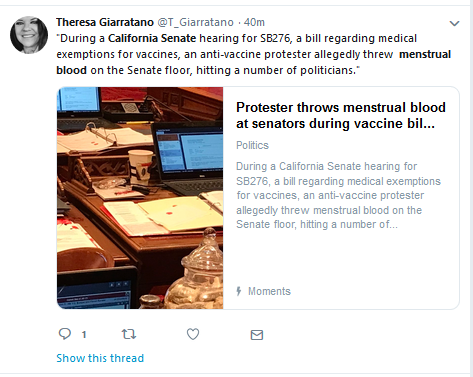 A few minutes ago, the anti-vaxxer stalkers – who’ve engaged in a harassment campaign all week – dropped a red substance onto the Senate floor from the elevated public gallery, dousing several of my colleagues. The person who committed this assault screamed it was baby blood.

These anti-vaxxers are engaging in criminal behavior. They’ve now repeatedly assaulted Senators & are engaging in harassing & intimidating behavior every single day, as we try to do the people’s work. They’re a cancer on the body politic & are attacking democracy. 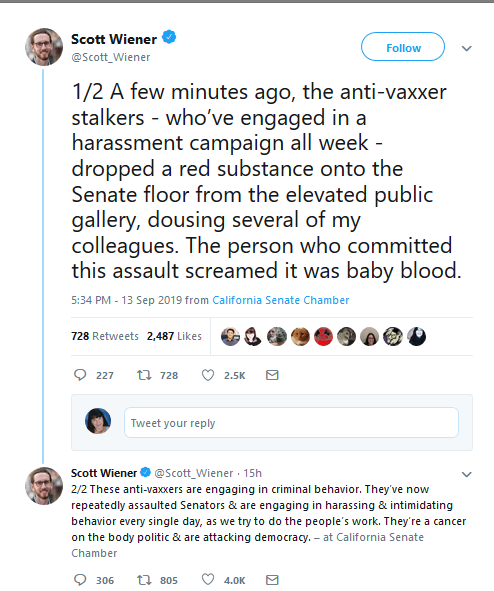 I find Wiener’s dramatic response fascinating. For years, gay rights activists have staged dramatic and aggressive protests for new policies and laws (e.g., pushing Proposition 8 boycotts of supporters). Did he not realize that such tactics might eventually be used on actions he and his colleagues supported?

The California Highway Patrol confirmed it was blood from a feminine Hygiene device.

Numerous lawmakers were hit by the red liquid, which was thrown from the upstairs balcony by protesters who were reportedly watching the floor debate at the time. They had objected to two pieces of legislation signed into law earlier in the week that would place strict regulations on medical exemptions for childhood vaccines.

CHP officers evacuated the chamber and opened an investigation into the incident, which allegedly happened at 5:14 p.m. Officers rolled out crime scene tape around the area, and CHP announced it had detained the protester on six charges after she “threw a feminine hygiene device containing what appeared to be blood onto the Senate floor.”

The protests have been occurring outside the state Capitol since sweeping new restrictions on medical exemptions for vaccines were signed into law by Governor Gavin Newsom on Monday. Despite the surge in the number of infectious disease outbreaks hitting the state, proposals are being put out to remove the new rules via a public vote.

Filing a proposed statewide referendum with the state attorney general is the first step in the process of placing a measure on the ballot. To qualify for the 2020 ballot, each referendum will need 623,212 valid signatures from registered voters within 90 days of the laws being enacted.

I’m waiting for the “My Body, My Choice” crowd to support not having the state forcibly subject you to a medical procedure.

If California banned all things irrational, they would be capitalist to an extent that would embarass even Ayn Rand.

“feminine Hygiene device “. What a phrase!

What’s a feminine hygiene cup? Is that like a douchebag or something. You know what….Nevermind.
I withdraw my question

I will answer cuz it is the best thing. It is a little silicon cup that sits inside like a tampon. But because you wash it thoroughly between each use, a lady can wear it overnight without TSS worries. It is reusable, and forms a vacuum seal so there is no leaking if it is placed right. It collects the blood, which is generally then emptied in the toilet. Throwing it at someone is just. Plain. Wrong.

have you heard of Days For Girls? They make reusable flannel pads to take to poor regions of the world. They mentioned that they wanted to distribute menstrual cups but their original region (subsaharan Africa) had strict taboos against insert-ables into the vagina.

their story of origin is amazing and one of the few charities that I support. Mostly cuz you can give ITEMS instead of money, which means that it cannot be repurposed for “overhead.”

I have a feeling that body scans are going to get a “whole lot more” invasive.

I just love it when one group’s “inappropriate methods” are then used against them down the road. The nerve of them.

I wanted to reconsider my downvote but cant just un-do it.

Feminine hygiene products typically have libertarian names, like New Freedom or Stayfree, so it’s not surprising.

I do recall Prop 8 gay activists manhandling churchgoers outside a SoCal church but can’t find the article links.

Bwahahahahaha… sorry but this turn about just strikes me as funny.
The senators should feel blessed, after all their support of abortion and the death of millions of dead babies. Think of this as a sort of baptism at your altar of government sanctioned death.

Poncharello is on the case.