LIVE: We Get Biden, Harris, and Warren on the Same Stage at the Third Democratic Debate

LIVE: We Get Biden, Harris, and Warren on the Same Stage at the Third Democratic Debate

Who will prove to be the bigger socialist? Warren or Sanders? 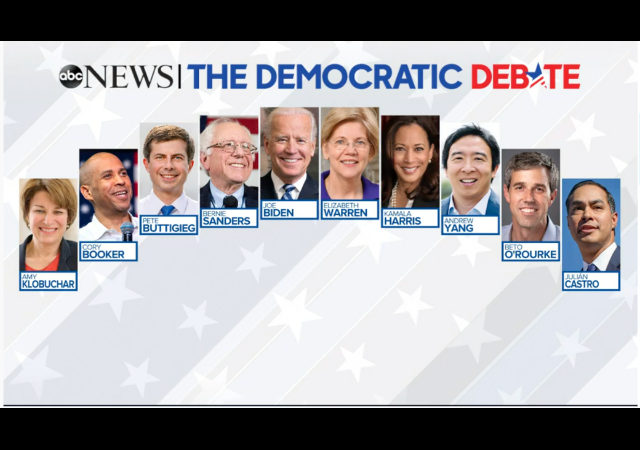 Why yes we have another 2020 Democratic primary debate. This one takes place in Houston, TX, on ABC from 8 PM to 11 PM ET.

Luckily we only have one night of this. Unfortunately, it includes ten candidates, which means we will probably see the usual: screaming, interrupting, and vague answers.

Each candidate receives a 60-second opening statement. They only have 60 seconds to answer each question.

Sixty. Seconds. It will be a repeat of the first two debates. I predict absolute chaos with Warren and Sanders trying to out socialism each other. Sanders will end up victorious because he screams and yells more than my Italian family.

Will actual issues come up this time around? Or will they stick to the same old social issues that cost them the 2016 election? Something tells me the latter.

“For a socialist, you have a lot more confidence in corporate America than I do.” Biden clocks Sanders over eliminating private insurance. #DemocraticDebate pic.twitter.com/nZcRc7DIa7

Andrew Yang in #DemDebate offers to give 10 American families $1000 a month. A presidential campaign with a sweepstakes. What a time. https://t.co/wwG3UmzucG

How to Pay for Everything?

Elizabeth Warren not answering George’s question and thus not admitting that millions in the health care industry will lose their jobs, people that actually like their health care will lose it, and taxes will go up for everyone #DemDebate

Warren STILL will not directly answer question she’s been asked for months and at each debate about whether middle class taxes will go up to pay for her health care plan. #DemDebate

Klobuchar and Buttigieg Gutting Sanders Medicare for All

Pete Buttigieg: “The problem, Senator Sanders with that damn bill that you wrote and that Senator Warren backs, is that it doesn’t trust the American people. I trust you to choose what makes the most sense for you” https://t.co/FpyGKLIArc #DemDebate pic.twitter.com/LIsXLpSHeN

Kamala is a Cop

Not really a great sign for Harris when the *moderator* gets applause for asking about her criminal-justice record: "When you had the power, why didn’t you try to affect change then?"

"When you had the power, why didn't you try to affect change then?" @LinseyDavis asks Sen. Kamala Harris about her record as a prosecutor.

Harris: "I'm glad you asked me this question and there have been many distortions of my record" https://t.co/EAl4Dalfwv #DemDebate pic.twitter.com/CXIsarOZze

Shemp and Curly played same part with Moe and Larry. All four of the Three Stooges were likable… which can’t be said for the Dem candidates tonight. Poor Tulsi… left out … which shows how dangerous she is against Harris and Beto. Central Committee can’t have that happen.

I believe it’s possible for Gabbard to qualify for the 4th debate even though she missed this one, the 3rd.

notamemberofanyorganizedpolicital in reply to rochf. | September 13, 2019 at 12:14 am

If all ten were played by Joe Dorita………..

The Friendly Grizzly in reply to notamemberofanyorganizedpolicital. | September 13, 2019 at 12:16 pm

What is Dorita? The feminine form of Dorito?

notamemberofanyorganizedpolicital in reply to The Friendly Grizzly. | September 13, 2019 at 1:36 pm

Sorry that is with an e instead of an o. (I don’t get to use that name but once a century. lol)

… Joe DeRita, was an American actor and comedian, who is best known for his stint as a member of The Three Stooges in the persona of “Curly-Joe.”

I have always believed that the true price we will pay for nominating Donald Trump is that one of these people will win the presidency in 2020 or 2024. What then? Civil war?

The “price” we paid for Trump was not having Hillary elected. I will pay that again and again.

And if you think it matters which Republican is nominated, it doesn’t. We are all Nazis, they want our guns, free speech, cheap energy, and rest of our freedoms.

And they will keep sending their socialist authoritarians until they win.

The ”price” we paid for Trump was having that spelled out clearly in a way that everyone but a Mittens Romney can see.

“I have always believed…”

You’re dumber than a broomhandle.

It’s OK it sounds like someone brought the pot.

There, there, I understand the longing. We all miss Marianne and her sincerity and calming abilities. So if I could, let me share with you how I deal with my longing for Marianne.

What I do is simply listen to her last campaign ad; it stays with me all day long, providing depth and meaning.

I hope it soothes you as well. Take a listen,

The granola image is a cover story. She’s actually a reparations candidate. That came out a little bit too publicly, and so she got bounced.

I think Trump is winning this debate, too.

notamemberofanyorganizedpolicital in reply to Leslie Eastman. | September 13, 2019 at 12:15 am

President Trump may be funding “their debates!”

If I didn’t know better I’d say the R party is funding the debates.

Without Tulsi this is not a debate. It is chorus. She is the only one in the field who is honest…so they didn’t let her in.

She’s a socialist like the rest of them. Maybe a tad less commie leaning is all.

She’s attractive, female, tall (unlike the other females) and has a steady speaking voice. She may be back in Debate 4 if you need your fix.

Then can you break the 3 hours (or whatever it was) into 30 minute segments, tile your big screen into 6 tiles, and run those six segments simultaneously? Get it over with in a half hour.

I tried to watch… I only made 5 minutes.
I couldn’t even make it through the introductory statements.

“There are NINE more Democrat debates to come. Just in case you have not yet lost the will to live.”

Biden has done well in all three debates. Even in the first one, when Harris attacked him, he didn’t give an inch and stood up to it by reciting his record, pretty much the same as he did on the racism question tonight.

But then he slurs his words and his factoids in between debates.

He must be drugged up for debates with some good stuff. Focus!