Leprosy May be the Next Infectious Disease to Plague Los Angeles

Leprosy May be the Next Infectious Disease to Plague Los Angeles

How long before a tax-paying California resident, who paid for a functioning public health system, is infected? 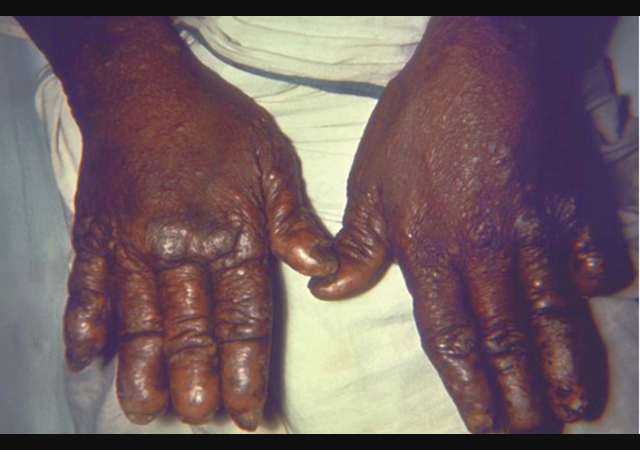 I have been covering the typhus and typhoid outbreaks that have hit Southern California as a result of the rat-infestation around homeless encampments.

Now an outbreak of a notorious disease, leprosy, is being reported. A recent study published as a Reuters Health report indicates the bacterial infection is emerging in the Los Angeles area (hat-tip ZeroHedge’s Tyler Durden):

Leprosy, also known as Hansen’s disease, is rarely seen in the United States, but cases continue to emerge in Los Angeles County, a new report says.

Dr. Ochoa and colleagues identified 187 patients with the disease in a review of medical records from their leprosy clinic spanning 1973 to 2018. Most patients were Latino, originating from Mexico, and they experienced a median delay in diagnosis of more than three years, the team reports JAMA Dermatology, online August 7.

Leprosy, more formally known as Hansen’s Disease, is caused by the Mycobacterium leprae bacteria. These pathogens grow slowly, and it can take up to 20 years before the first signs of the infection occur. Perhaps the most infamous aspect of the disease is the loss of fingers, toes, and other extremities if the infection is left untreated.

If left untreated, the nerve damage can result in paralysis of hands and feet. In very advanced cases, the person may have multiple injuries due to lack of sensation, and eventually the body may reabsorb the affected digits over time, resulting in the apparent loss of toes and fingers. Corneal ulcers and blindness can also occur if facial nerves are affected. Other signs of advanced Hansen’s disease may include loss of eyebrows and saddle-nose deformity resulting from damage to the nasal septum.

Perhaps one of the most famous cases of leprosy was that of King Baldwin IV of Jerusalem.

A troubling element of this news is that no one knows precisely how Hansen’s disease spreads. Scientists currently think it may happen when a person with Hansen’s disease coughs or sneezes, and a healthy person breathes in the droplets containing the bacteria. It appears that prolonged, close contact with an untreated leprosy patient over many months has to happen before infection can occur.

Imagine the Los Angeles area police officers and civil servants, who routinely walk through the coughing, hacking, and ill homeless population along Skid Row on their way to work daily. How long will it be before a tax-paying California resident, who paid for a functioning public health system, is infected?

Another disturbing aspect of this report is the complex treatment, which takes place for a year or two. Treatment for Hansen’s disease includes a combination of two or three antibiotics at the same time.

How many mentally ill and/or drug-addicted homeless Californians are likely to manage to take the pills at the required times, refill prescriptions, and continue the treatment for up to 24 months? How is the California health system, which offers MediCal to illegal immigrants up to 26 years in age, going to pay for these treatments?

One note: The city employee who was infected with typhus earlier this year is still not well enough to go back to work.

Sadly for Greenwood, the data suggests even more medieval diseases are on the way.

Keep electing the politicians in place now, and Los Angeles can expect to see outbreaks of typhoid, typhus and bubonic plague as well as leprosy. Vagrancy and loitering must become the crimes they once were to get the homeless off the streets, thereby allowing public places to once again become relatively clean and non-infectious.

Buy large tracts of land out in the middle of nowhere and move the homeless into inexpensive shacks on this land. Take their government benefits as rent and pay a non-profit to feed them gruel.
Those who refuse to move to these homeless shelters then charge them their government benefits as rent and punish them for vagrancy and every other crime we can think of.

jack is so right. the best thing, if there is one, is whoever contracts this whether from ILLEGAL ALIENS or ILLEGAL HOMELESS will sue the pants off the brain dead governor gavin(it’s gonna happen) newsome and the rest of the elected socialist traitors…er i mean democrats

Biblical, for real, Lev. 13:45-46, “And the leper in whom the plague is, his clothes shall be rent [torn], and his head bare, and he shall put a covering upon his upper lip, and shall cry, Unclean, unclean. All the days wherein the plague shall be in him he shall be defiled; he is unclean: he shall dwell alone; without the camp shall his habitation be”

I’ve been thinking the same about Seattle (and PDX). They’ve turned about as far from God as can be and have become a hate ridden cesspool of homeless addicts who assault pretty much everyone. Those who aren’t druggies assault anyone who is conservative.

My thinking is the homeless / addict problem has been Biblical. The health issues coming next are too. The inept leftist regimes in Ca, Or, and Wa are too busy fighting climate change, prosecuting Christian bakers and florists, and hating Trump to be bothered with addressing the problem.

My rifle company regularly visited a leper colony looking for VC and that an unforgettable experience. California may giggle at reality like a teenage girl, but they really don’t want that disease.

Great Maker. This is the 21st century. What in the hell did we do wrong to get to this point. We should be well beyond all of these diseases in the United States. But here we are.

Well, I can’t say for sure what the root cause is (physical plus moral decay, I suspect), but the Democrats seem to be the carrier.

What we did wrong was to elect socialist traitor…. er i mean democrats and keep them in office. the best thing about these plagues is that they are occurring in the populous(y)cities the elect these anti Americans

Time to repurpose Molokai? Doubt there will be a Saint Damien to take care of lepers in this day and age.

Sadly, this is what the left wants.

They really are hoping that disease will reduce the surplus human population they find deplorable.

Truth be told, if a Spanish Flu epidemic akin to the 1918 outbreak were to hit the world and cause millions, even hundreds of millions to die, they would be doing the goose step in celebration.

We do have leprosy in the US, and it’s not clear that we can blame the porous border for that. It’s long been associated with armadillos, the only animal known to share the disease with humans, and of course the southwest is where the armadillos are. Even among people who for whatever reason handle (or eat) armadillos, leprosy is relatively rare. The organism is very fragile; this inhibited early research, as it won’t live in a culture dish in the lab. It’s easily killed by heat; human body core temperature (98.6F) will kill it, which is why it affects the extremities—fingers, toes, noses—which run a bit cooler. A major barrier to treatment is that patients are reluctant to report it; the idea of being inflicted with poxes of Biblical proportions is something most want to ignore rather than treat. In short, it’s treatable, even curable, but the patient has to get and take his antibiotics.

Also found in the Southwest is the plague, usually in its bubonic state, among the rodent and squirrel populations. Several human cases are reported each year, with transmission typically occurring from the bite of a flea carrying the bacteria.

Only about 5% of the general population is susceptible to Leprosy, the majority of us have genetically immunity to the disease. You don’t contract it by merely shaking hands, it take frequent, close contact to spread. Visited the last leprosy colony on Molokai in Hawaii, a very interesting place to explore.

Well, walking daily and breathing in
particulate will do the trick!

Isn’t leprosy one of the Old Testament plagues, along with locusts, piles, etc?

Most stuff coming out of Hollywood is unclean. As are the streets. That the “uncleanness” of leprosy would follow would be ironic. OTOH I expect the black death to reawaken and go there for a visit soon, or as James Cagney might say, “you dirty rat!”.

Leprosy,
It’s crawling all over me!
There goes my eyeball,
Into my highball!

Leprosy,
It’s crawling all over me!
There goes my right ear,
Into my lite beer!

Leprosy,
It’s crawling all over me!
There goes my double chin,
Into my glass of gin!

If anyone gets it, hopefully it’ll be the idiot mayor of LA, Eric Garcetti.

Could this have something to do with the porous border the Democrats (and, let’s face it, most Republicans) want?

It seems they have earned what they have. LET THEM KEEP IT!