“protestors played music and alarms, held up signs in the windows from outside, and chanted throughout the event” 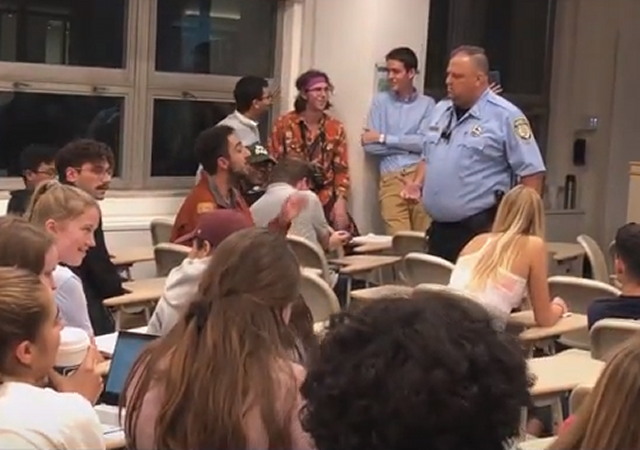 The College Republicans at Georgetown University held an event last week. Their aim was to refute the climate change hysteria pushed by Democrats. Progressive students wouldn’t allow the talk to go on and tried to make it all about them.

Speakers were interrupted by outbursts and chants for “climate justice” now.

An effort Thursday night by the Georgetown University College Republicans to host climate scholars to rebut 2020 Democratic presidential candidates’ climate alarmism descended into chaos after dozens of student protesters crashed the event and continually disrupted it to the point that campus police shut down the forum and evacuated the room.

Student hosts and the climate scientists and policy experts were eventually let back into the room to complete their discussion, but the first 20 minutes of the panel was so frequently interrupted it culminated in its temporary halt as campus officers worked to gain control of the situation.

At the start of “Climate Forum: A Rebuttal,” protestors packed the room and, beginning with the introduction of the first speaker, shouted talking points, various obscenities, and hostile chants.

Despite campus free speech policies announced clearly by the hosts at the start of the event, the harassment continued. Amid the frequent disruptions, a protester dressed as a clown intermittently honked a horn.

Campus police ultimately had to be called to intervene. Have you noticed that you never hear of College Republicans interrupting events for other groups in this way?

Annemarie Cuccia and Sarah Watson of the Georgetown Voice have more details:

The Georgetown University College Republicans (GUCR) hosted a rebuttal to the Democratic presidential candidates’ Climate Change Forum, held at the university, on Thursday. The GUCR event highlighted several presenters, including Marc Morano, a climate change skeptic who published a book called “The Politically Incorrect Guide to Climate Change.” During the event, a group of students staged a sit in calling for climate justice…

After Morano, the first speaker, was introduced, protester Olivia Torbert (SFS ’20) immediately stood up and offered an alternate introduction, emphasizing Morano’s association with the fossil fuel industry and his past disparaging remarks about climate scientists.

The protestors played music and alarms, held up signs in the windows from outside, and chanted throughout the event. One of these protestors, sporting a clown costume, interrupted Morano’s presentation by blowing an air horn…

As tensions rose, GUPD arrived at the event. Two officers came inside and asked those who had been disrupting the event, including Ferguson and the protester dressed as a clown, to step outside. They refused to leave the room, prompting the GUPD officer to say he would only ask so many times. When asked to present their GoCards, the students did not comply.

This video from the College Fix is about 20 minutes long and documents all of the silliness:

If you want to see a shorter version of what happened, watch this video from Campus Reform:

It’s not enough for the left to hold their own events on issues like climate change. They think they’re entitled to shut down events which present an alternative view.

They repeatedly prove that control is their primary interest, not the environment.

Ah yes. The tolerant left. Always willing to civilly engage the opposition with patience and understanding. They’re open to having their minds expanded if influenced with logic and rationale. YEAH RIGHT!

Ah yes the whimpy conservatives sit there and take it

Yours is the point I was about to make.

It is, for better and worse, in our principles: all experience hath shewn, that mankind are more disposed to suffer, while evils are sufferable, than to right themselves.

Bring back the draft so the commies will move to Canada.

You left out a key ingredient: another war with lawyers and politicians establishing the combat rules. And, don’t forget not even knowing what we were fighting for.

If the activists believe facts are on their side, why are they so afraid to let others speak? You only silence another when you are afraid of what they have to say….

Liberal playbook: Liberalism is beyond reproach so there is no need to defend it.

Round up the twerps and offer them the opportunity to take Debate 101 or expulsion.

From what I’ve seen, the style of ‘debate’ taught at american universities is to spam buzzwords like the micromachine man until the opponant gives up in exhaustion.

Their intent is clearly not to win friends and influence people. To what end, then, are these ‘protests’ directed?

They are doing what they can to get Trump elected again.

Leftists’ intrinsic and reflexive infantilism cannot be dismissed as merely the product of youthful immaturity and an adolescent mindset, because the roots lie in something uglier and more dangerous — a thuggish and unabashed totalitarianism, rationalized by the religious fanatic’s self-perceived righteousness and messianic fervor.

The disruption form of protest seems rooted in the same idiocy that thinks winning an argument only requires getting in the last word.

Why did the police “shut down the forum” instead of arresting the disruptors? What the police did seems somewhat equivalent to shutting down a business where a handful of juvenile delinquents are stealing things and causing a nuisance rather than rounding up the troublemakers and hauling them off to jail.

Toddlers having tantrums. These are the same Climate crusaders who have as their St. Joan a mentally ill 16 year old girl who has been brainwashed into believing that the world will end in 12 years. When the poor girl ultimately commits suicide, the pope will probably canonize her long before that deadline passes without consequences – other than the young lives ruined by progressive politics. Life on the planet will go on, just without Greta. A tragedy worthy of Shakespeare.

“Have you noticed that you never hear of College Republicans interrupting events for other groups in this way?”

Maybe that needs to change …

Whatever happened to the old tradition of the sergeant at arms who carried and wielded a mace to maintain order at public meetings?

I miss the days when cops would beat the crap out of hippies.