The former patient remembered Klopfer’s “tone of voice, how direct, callous it was. Even the procedure … It was rough.” 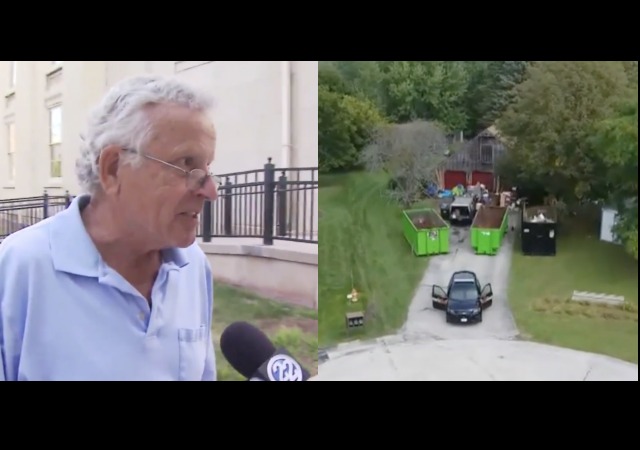 I promised to provide updates on the story of deceased abortionist Ulrich Klopfer, who kept over 2,200 preserved murdered babies in his home. The Associated Press reported his widow and her sister discovered the bodies. That little fact brings up a whole bunch of new questions.

Authorities in Indiana did not discover any murdered babies at the shutdown clinics operated by Klopfer. They found a bunch of old medical records.

One former patient told CBS Chicago that Klopfer expressed no empathy or emotion when describing the abortion process. She also said he left her bleeding and scarred after her second abortion.

I discovered a buried fact as I read articles for updates on the Klopfer investigation. This from the AP (emphasis mine):

Klopfer, who died Sept. 3, had performed abortions at clinics in Fort Wayne, South Bend and Gary. Last week, his widow and her sister were cleaning out the garage at Klopfer’s Will County, Illinois, home when they found the fetal remains.

How did his widow not know about the murdered babies stored in their garage?

Kevin Bolger, the lawyer representing Klopfer’s widow Sherry, explained to The Washington Examiner that the doctor hoarded everything. He filled the garage with so much stuff that no one could walk into it.

Sherry and her sister discovered the murdered babies in the garage wrapped in plastic bags. Klopfer used a chemical that helps “preserve biological material.”

Bolger said the house was similar to the garage:

“He was a hoarder and the house was floor to ceiling piled with garbage and boxes, old TVs, typewriters, and computers, you name it … You can barely walk down the hallways in the home,” Bolger said.

I guess Sherry hoarded as well because if it’s as bad as Bolger described I do not know how anyone could handle living in that situation. Bolger claimed the situation left Sherry in “total shock” and “had nothing to do with this, had no idea he was doing this, and had no way to find out.”

Will County officials announced the murdered babies were “from abortions performed in 2000, 2001 and 2002 in Indiana.” They will send the human remains to Indiana where officials have started their own investigation. From NBC News:

State’s Attorney James Glasgow said that there are no immediate indications that Dr. Ulrich Klopfer, who died Sept. 3, conducted any abortions in Illinois or committed any crimes in the state.

Glasgow did leave open the possibility that Illinois authorities could investigate a statement Klopfer once made that he performed an abortion of a 10-year-old Illinois girl who had been raped by her uncle, even though investigations found no records of such a crime.

He said that the laws Klopfer might have violated in Indiana were on disposal of fetal remains and failing to file the proper paperwork related to the procedures.

“If they (Indiana authorities) get any information about the 10-year-old girl and it’s within the statute of limitations then we would make ourselves available,” he said. But, he said, “We need to make no further criminal inquiry here.”

They did not say if Klopfer provided any information on the bags. Glasgow and others could tell “from the condition of the” human remains that he murdered them years ago.

No one has any idea why he kept the bodies.

Investigators have sent out a plea to women who had abortions by Klopfer to come forward.

Investigators did not find any human remains of murdered babies in the abandoned clinics in Gary, South Bend, and Fort Wayne once operated by Klopfer. They did find “thousands of patient records” at the clinics.

Indiana Attorney General Curtic Hill lashed out at this fact because these women “had an expectation that their privacy would be protected, but their records were ‘abandoned’ in the clinics when they closed years ago.”

“He was extremely rough.”

One former patient has spoken out about her procedures at Klopfer’s clinic. She also gave us a view into Klopfer’s soul.

Assetou recounted her experience to CBS Chicago, which did not provide her last night for privacy. When she found out about Klopfer, Assetou immediately thought, “Oh my God, I did this awful thing and my children are possibly held in a box somewhere in a house.”

The news made her cry. Assetou’s body language and her voice makes me believe she regrets her abortions. She remains pro-choice, but wants to use her experience to ley people know “if you choose to do that just know it will live with you forever.”

The 32-year-old said the discovery has brought back a flood of emotions about the first time she went to see Klopfer at his now-closed Gary, Indiana clinic, when she was 18. She was carrying twins and still has the ultrasound pictures. Klopfer’s name is imprinted on them.

Assetou remembers sitting in a room with other women. She remembers Klopfer talking to them before the procedure.

She said when she went back for her second abortion eight years later, not much had changed — except this procedure left her bleeding and scarred.

“The one thing I can remember was he was extremely rough,” Assetou said. “His tone of voice, how direct, callous it was. Even the procedure … It was rough.”

Close the abortion chambers. Tear down the walls. Despite the established Pro-Choice quasi-religion (“ethics”), Planned Posterity (PP) (e.g. selective-child, recycled-child), including summary judgment, cruel and unusual punishment, and denying the right to keep and bear arms… legs, a head, and life, is a civil rights issue, a human rights issue.

“Authorities in Indiana did not discover any murdered babies”

Well that’s a relief. The ‘good doctor’ at least tidied up around the place…

She murdered twins because they were inconvenient, and went back to kill another, and then thinks we’re supposed to feel sorry for her because the executioner she hired wasn’t “empathetic” enough.

A wicked witch practicing the reproductive rites of the Pro-Choice quasi-religion of the Planned in the Social Antechamber of Blood, Carbon, and Flesh… Taxation.

We all know the truth: if cameras broadcast live from every abortion room, it would be illegal within 36 hours – just as long as it took for legislators to get to their capitols and vote.

“Klopfer expressed no empathy or emotion when describing the abortion process. She also said he left her bleeding and scarred after her second abortion.”

She killed two babies and was looking for empathy?