West also said she chose Alice Marie Johnson over her own reputation. 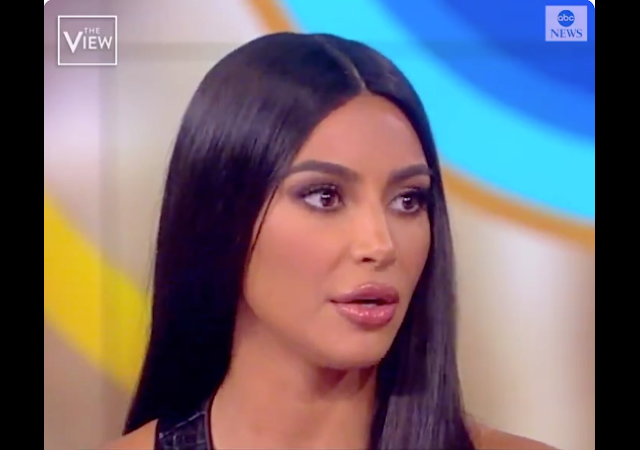 Whether you love or hate President Donald Trump, you have to acknowledge his actions on criminal justice reforms. You can say the same about Kim Kardashian West.

West, who endorsed Hillary Clinton, went on The View this morning. She not only talked about her activist work in criminal justice reform but also praised Trump for signing the First Step Act.

Trump signed the First Step Act in December. From AEI:

There was no doubt this topic would come up on the liberal heavy show. After all how could anyone work with Trump on anything?

Conservative Meghan McCain asked West about the backlash she received from her Hollywood kin. Note how The Daily Beast wrote that West answered the questions “carefully:”

“You got a lot of heat from a lot of people,” Meghan McCain noted before stressing that she believes in “bipartisanship on a basic level” and thinks “we’re not going to get anything done unless we’re listening to two different voices.” She asked their guest, “Were you worried about any backlash you were going to get because you did this bill with President Trump?”

“I definitely was aware,” Kardashian answered carefully. “But for me any of my issues have always been more about the people and not about the politics. And so for me to think that I couldn’t go and speak to the man that has the power to change people’s lives because of some opinions I may have of certain policies and issues, to me felt very self-centered.”

“That I was more worried about my reputation than saving someone’s life,” she continued, referring to Alice Marie Johnson, who ultimately had her life sentence commuted by the president. “And so I put that all out the door, and I thought, you know what? I’m going to choose her over my reputation.”

McCain, who has no love for Trump, retorted that Trump “tends to listen to celebrities,” which led her to praise West for using her status to change Trump’s mind.

However, West reminded McCain and the others Trump also deserves credit:

“I felt like I had an open opportunity to do that,” she said, “and from the president going from being really harsh on his stance on prison reform to changing and actually signing the First Step Act and getting that bill passed, was amazing.”

“I’m going to choose her over my reputation.”

Kim Kardashian West tells @TheView she wasn’t concerned about her “reputation” when she decided to work with Pres. Trump on criminal justice reform, because her “issues have always been more about the people.” https://t.co/YZN4zPE0rb pic.twitter.com/wbFAYvdfnr

In June, the US Sentencing Commission released its first report related to the First Step Act. Under the law, 91.3% of those freed inmates were African American.

In July, the Department of Justice announced the release of 3,100 inmates due to Trump’s criminal justice reform. These inmates gained their freedom “because of a change in how their good-behavior time is calculated.”

Maybe Boris Johnson can do the same in the UK.

Starting with backing Free Speech in truth for all there.

Tommy Robinson has been released from prison!

LI hyperlinks (to comments and stories) regularly get hijacked to your advertisers sites. It happens in about 1 in 4 times I visit.

This happens to me ONLY on LI, so no it’s not a virus on my end.

My Browser is Edge, and no I’m not switching browsers Chrome or crApache to fix it.

NoScript is your friend

Nothing LI can do about it other than reject the add model. That results in a loss of $$$ and the loss of LI.

You can use an add blocker or do what I do just reclick the link when you get redirected to an add. Takes all of a couple seconds.

I haven’t had this happen to me unless I haven’t let the page fully load or have it scaled too large so ads skip around and the whole page seems to link to an advertiser. This happens on my tablet, not so much on my laptop. But it happens on other sites, too, like Town Hall and Twitchy. Is this what is happening? Or are our actual links to source material in blog posts being redirected (a completely different problem)? Which links do you mean? The ones in our posts? Links in the “Blogs I read” list? Others? Sorry to ask so many questions, but I want to check this out before I raise any alarms. 🙂

Conplain to Microsoft and stop whining.

Make a donation and go find a good adblocker.

This woman is clearly a racist.

The Historical Black Colleges Association tried for 8 years to meet with Obama and his administration. They were rejected every year. One of the first thing Trump did was sit down with them and set up a commission to work with them in an ongoing basis. Those college presidents received backlash as well. It’s a shame. With Trump’s opponents, they can never let any of his good deeds go unpunished.

For a leftist/Democrat, a problem is to be exploited not solved.

That’s her reputation, very pretty girl with a huge butt that she had implants in and her step father came out transgender

Yeah, let’s not ruin our reputation!

Its cool though. She’s on Trump’s side.

This ‘awesome’ bill just allowed the gov to undermine prison workers union negotiations going on now here in TX. This means that more ‘American’ prison guards are being let go in exchange for the ‘cheaper’ Nairobians and Ethiopians that have been allowed to flood in 6 months ago, seemingly to await this bill to provide them jobs. No news on this part of the Kardashian, er, I mean Trump, plan.

Enough with the plastic surgery, Kim.