Having a bloody eye on national TV doesn’t really help his “picture of health” case. 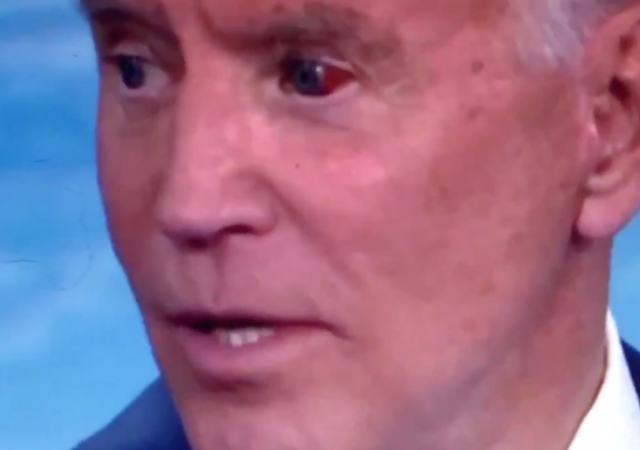 As the WaEx explains, it’s not an uncommon health issue:

Former Vice President Joe Biden appeared to have a blood vessel burst in his left eye while participating in CNN’s town hall on climate change.

A broken blood vessel in the eye, also known as a subconjuctival hemorrhage, can be caused by several things, including high blood pressure, bleeding disorders, blood thinners, or even excessive straining.

However, Biden has dealt with a great many health issues and has not disclosed any details about his medical record since 2008.

As we’ve chronicled here, numerous gaffes along the campaign trail have led to speculation that Biden’s health could be less than stellar.

Joe Biden 2020: Totally Not Senile or Too Old

Et tu Buzzfeed? Joe Biden “slipups make it convenient to question if Biden, at 76, is up for the job”

So having a bloody eye on national TV doesn’t really help his “picture of health” case.

Though it’s worth remembering that during the Obama years, Biden was stuck in a perpetual gaffe cycle in which he would say something unintentionally outrageous, the administration would whisk him out of the public eye for a few weeks, reintroduce him back to the population where he would fare alright for a short period of time before accidentally creating another embarrassing moment.

In any case, none of this is a good look for the Democrats current frontrunner and (current) best hope of defeating Trump.

Looks like a scene right out of “X-Files”. I always suspected Biden of being an extraterrestrial.

Joe Biden is not ok… His body is giving him warnings.. His mental abilities are diminished.

@afbranco nailed it this morning…

I think he may have blocked carotid arteries. Just sayin’

notamemberofanyorganizedpolicital in reply to amwick. | September 5, 2019 at 2:53 pm

If you think Ol’ Joe’s eyes are red, just wait until one of the Dem Runners in the next Dem debate brings up Kamala’s intimate relationship to Juicy, Juicy, Juicy – the very French Actor!

” His body is giving him warnings.. His mental abilities are diminished”
Considering Biden is looking more like the only strong suit on the Democrat stage that he appears to have a wider voter base. They are learning that it is not just the popular vote but the electoral college is go to get them in the end zone. I’m of the belief that they too are hedging on Joe’s very noticeable physical problems and will be nominating a very robust” backup President, 2nd in Command V.P.. It will be part of the pre-bargain Joe makes with the DCC in order to lock in his nomination. Similar to the deal they gave Hillary but with a twist. It will be a”pre-chosen someone” who will fill the void when (not if) Joe falters; likely also to be part of a manipulating pre-bargain agreement. Everything we know about election fraud and manipulation has been by the results of Democrats efforts to orchestrate an election outcome.

Cf FDR in 1944. He and everyone in the DNC knew that he wouldn’t serve much of his fourth term, and that in choosing a running mate he was in fact choosing the next president. Which is why he dumped Wallace, who while not a communist himself had many communist friends (including people whom FDR secretly knew to be Soviet spies) who would occupy powerful positions in his administration, and chose Truman instead.

Didn’t he have one or more strokes a few years back? I suspect his blood vessels are generally weak, and if by some catastrophe he did end up in the oval office, the rise in blood pressure from the stress would kill him.

While it looks bad, this can be a a side effect of taking blood thinners, which is common at his age.

Notice it’s the left eye, indicating that “Joe” is a damaged Terminator.

But they say he’ll beat Trump by 12 points! They’ll pull a Weekend at Biden’s to win. (Like they did with Hillary)

God forbid, but I think this poor man will stroke-out before long.

The reality is blood in the eye is not a big deal.

I get blood in the eye a couple of times a year for no apparant reason. Though my fitness level is vastly superior to Biden’s. ) I am age 64, resting heart rate mid 40’s, still competitive cyclist, etc)

Bottom line, this is not a big deal.

Biden may have lots of health issues, but this is not one of them.
Hillary’s fainting on the other hand was a very big health issue.

I agree. I’ve had this happen once or twice a year since I turned 50. It scared me the first time, but my doctor told me it’s no big deal. Incidentally, the blood in his eye will probably turn yellow (bilirubin) over the next few days.

So it’s no big deal. Especially compared to people like RBG, whose serious ailments would have killed most people years ago.

It’s a big image issue when combined with all the verbal fluffs, and the history of aneurysms.

Joe Biden “slipups make it convenient to question if Biden, at 76, is up for the job”

Whatever happened to “pouncing”?

Don’t quote me on this, but I heard from a really reliable source that Gropey Joe has been working out with Hairy Reed.

I chalk it up to Slow Joe’s frustration at not being able to reach out and slap the shit out of his wayward fellow Democrats. Joe ain’t the one that needs to be bloodied.

The blood in the eye was readily visible but no one has mentioned how the numbers “666” appeared on his forehead. I thought it was strange at the time.

The worms that are devouring Biden’s brain are affecting his eye.