German state broadcaster DW News: “Berlin is searching for a strategy to deal with the new reality.” 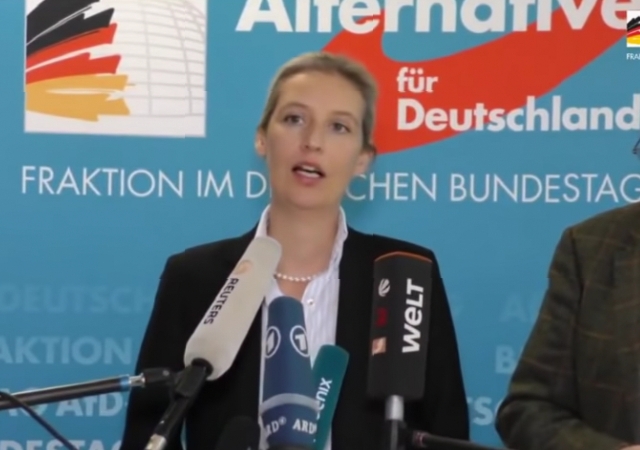 Germany’s Alternative for Germany (AfD) party has surged in the regional elections, winning a quarter of the vote in the eastern states of Saxony and Brandenburg. The party made huge gains in the former communist east, emerging strong second by getting 27.5 percent in Saxony and 23.5 in Brandenburg.

The AfD thanked voters for a “pronominal election success” in the east. “Let’s carry on like this and fight together so that Germany isn’t ruined by the continuation of Merkel’s Red-Green policies, instead remain a home worth living for our children and grandchildren,” said Jörg Meuthen, the national spokesman for the AfD.  The party is polling at 21 percent in Thuringia, an eastern German state which goes to election next month.

The mainstream parties, Chancellor Angela Merkel’s Christian Democrats, the Greens and the Social Democrats, have sworn not to work with the AfD. The latest outcome has further prompted mainstream politicians to consider join forces with the far-left Linke, the successor of the East German Communist party. With the AfD making strong gains across the country, senior Social Democrats and Greens are increasingly calling for a tie-up with the former communists to save Germany from a sinister ‘rightward shift’ (Rechtsruck).

Preliminary official results in regional elections in Saxony and neighboring Brandenburg have indicated that the center-right and center-left will stay on top despite their decline in popularity.

Chancellor Angela Merkel’s center-right Christian Democrats (CDU) will remain the strongest party in Saxony, with just over 32% of the vote. In Brandenburg, they scored 15.6%.

The center-left Social Democrats (SPD) will hold on to the top spot in Brandenburg with 26.2%, down from 31.9% in the previous election in 2014. The SPD received just 7.7% of the vote in Saxony.

The far-right Alternative for Germany (AfD) made gains in both states, at 27.5% in Saxony and 23.5% in Brandenburg. While these represent massive leaps from their results in 2014, when the party was only a year old, they’re very similar to the AfD’s scores in the two states in the last national election in 2017.

In the 2017 general elections, the newcomer AfD entered the parliament for the first time after winning around 13 percent of the vote, emerging as the third-biggest force and becoming the country’s main opposition party. Created six years ago as an offshoot of a grassroots movement against the European Union, the party now sits in all sixteen German states.

The German political class and the mainstream media remain clueless to the factors driving AfD’s popularity. “The representative of parties [other than the AfD] report of a climate of fear, of clinched fists and threats, which they experienced in the state election,” German newspaper Der Tagesspiegel reported from Hirschfeld, Brandenburg. Responding to the newspaper’s query on why the AfD was doing so well in polls, Valentine Siemon, the Green party candidate from Hirschfeld, replied: “To be very honest, I don’t understand myself.”

British newspaper The Guardian credited AfD’s gains in the east to significant opposition to radical Islam and open door immigration. “Analysis of the results showed that in Saxony, home to the notorious anti-immigrant campaign group Pegida, often seen as the protest arm of AfD, voters’ main motivation for choosing AfD was out of conviction for its political message,” the newspaper commented.

“While Germany’s establishment parties are likely to retain control of both states, the AfD’s surge illustrates the difficulty centrist parties face in combating the rise of populism in Europe’s largest country,” Politico noted. “Berlin is searching for a strategy to deal with the new reality,” Germany’s state broadcaster Deutsche Welle declared, adding that “while the government was still stable enough for now, it could not simply maintain its business as usual.”

In response to the weekend’s result, the German political class and media are doubling down on their attacks on the AfD. Political parties, celebrities and TV commentators are rallying under the banner of “Fight Against the Right” (Kampf gegen Rechts). Instead of addressing the burning issues of border security, migrant crime and slowing economy, the establishment is busy shooting at the messengers.

The campaign seems to be having a limited impact on the voters. “The media are losing credibility in the eyes of the people by their continuous defamation campaign against the AfD,” party’s national leader Alice Weidel said. “This is increasingly showing in the election results, like now in Saxony and Brandenburg.”

Antinativism has progressed to liberal proportions. Community action was inevitable. Hopefully, they won’t swing too far left during reconciliation.

Antinativism has progressed to liberal proportions. Community action was inevitable.

You do understand, don’t you, that ‘antinativism’ is simply a recognition that the multitudes moving into your apartment block without documents are anything but members of the ‘community’?

Huh? That makes no sense at all.

left and right don’t mean the same things over there

A salient observation. In the American context, the political spectrum ranges from right is libertarian, to center is conservative, and the left is divergent with authoritarian impulses. The far-right is anarchist, and the far-left is totalitarian, with a left-right nexus at the extremes.

The fact that you continue to repeat this canard doesn’t make it any less false.

Considering that Linke literally means “the left” and consists of a bunch of old Commies, it is hard to see how the epithet “far-right” fits them, except maybe in the current sense of “people that I disagree with and would like to silence.” Maybe Vijeta typed “far-left,” but his spell-checker corrected it because there is no such thing.

Thanks a lot for pointing out! Far-left obviously.

“Fight Against the Right.”

“Fight Against the Right People.”

Fixed It For Them

In Germany the “Right Wing” is almost like being Democrats in the US.

That country is doomed. And a former East German loony got them there.

I bet the idiots who cheered for Reunification must feel pretty silly by now. Not only they’ve been paying through their nose to fix the results of 50 years of communism gor the past 28 years, but they also invited 2.5 million jihadis to their homes.

The average German doesn’t want to be stabbed, raped, or pay for endless welfare. Go figure! I’m surprised the AfD numbers were only 25% … should have been more like 90%.

It’s not that the Germans are against a strong welfare state. They love free stuff just as much any other European. It’s that they think it should be for Germans instead of hostile invaders.

“Far-right” seems to be the slander-of-the-day for failing political parties to use against people who simply expect a well-run, locally-controlled government.

Most of the problems in both Europe and the United States arise from the use of predictably bad policies to obtain the predicted bad results. When the answer to bad or failed policy is mere slander, it is a clue that the political party is in the business of politics for venal reasons, not to represent the real citizens of the locale.

Central Government?
Patronized by celebrity globalists? Unlimited immigration w/open border agendas? Biased Media?
Sounds the same but different. If weren’t for the association of right and left of center labels you wouldn’t even know if left home.

Just wait until Germany feels the effects of a hard Brexit imposed by their Brussels masters. Sales of German cars will dwindle, replaced by Japanese and Korean cars. They will be cut off from their usual London bankers and financial companies. UK will recover quickly, but Germany is headed for a 20-year slide.

But on the plus side, bananas without the correct curvature will still be banned.